The Police chief of Liège, Belgium, has said that the deceased gunman, who fatally shot two female officers and a bystander outside a cafe and took one woman hostage at a local school, deliberately targetted police.

Shots were heard in the centre of the eastern Belgian city of Liège at around 10.30 am local time when an armed man opened fire outside the Cafe des Augustins on the Rue des Augustins, killing two police officers.

Belgian prosecutors’ office spokesman Philippe Dulieu confirmed the attacker in Liege was carrying a knife and approached two police officers, stabbed them several times, disarming them, and then used their weapons in a shooting rampage.

Dulieu said that the attacker “then took their weapons. He used the weapons on the officers, who died.”

National Belgian broadcaster RTBF has named the suspect as 36-year-old Benjamin Herman who was on temporary release from prison. He was known to police for petty crime such as theft, damage to public property, and minor drug trafficking.

The broadcaster speculates that he was radicalised in prison in Lantin, where he began his sentence in 2017, but whilst being allegedly known for violence by fellow inmates, he was not known for being associated with the radical Islamist prison scene.

Belgian officials confirmed a third person, a 22-year-old man who was in his car at the time, was also killed. A member of the Anti-Banditry Squad (PAB) and another bystander were reportedly injured.

The shooter then fled and held a cleaning lady hostage in the Waha high school. Police confirmed that security services arrived on the scene and shot the suspect dead, reports HLN. 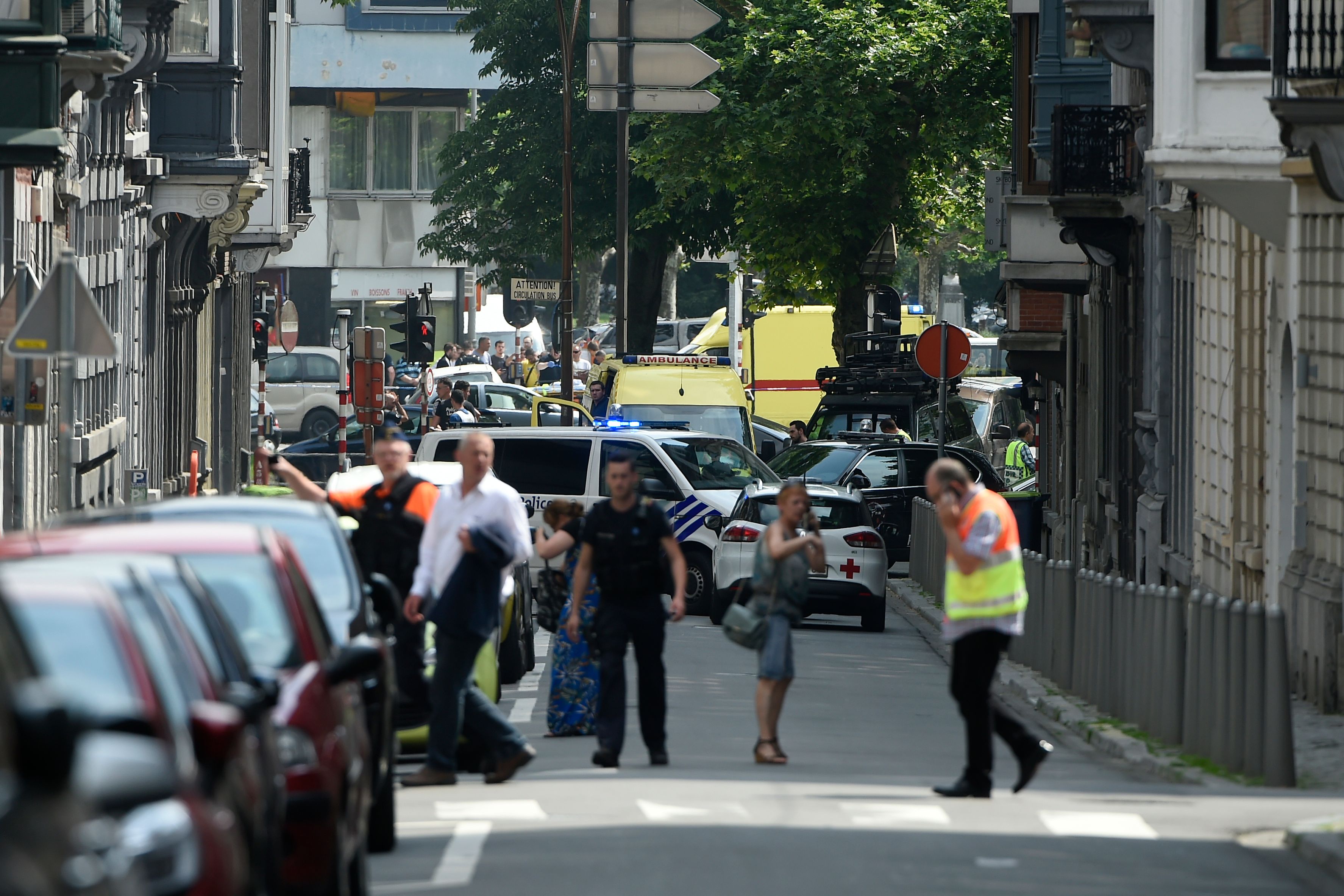 Police and ambulance are seen at the site where a gunman shot dead three people, two of them policemen, before being killed by elite officers, in the eastern Belgian city of Liege on May 29, 2018. – The shooting occurred around 10:30am (0830 GMT) on a major artery in the city close to a high school. “We don’t know anything yet,” the spokeswoman for the Liege prosecutors office, told AFP when asked about the shooter’s motives. (Photo by JOHN THYS/AFP/Getty)

Belgian broadcaster RTBF reports claims that a terrorist motive is suspected. According to police sources who have allegedly spoken to Belgian newspaper La Libre the gunman shouted “Allah hu Akbar” before being shot dead by police.

Another official from the Belgian federal prosecutor’s office, who spoke on condition of anonymity with The Associated Press, said that “there are indications it could be a terror attack”, and the case has been taken over by the office which deals with extremist attacks.

An eyewitness video appears to show evacuation of the Avroy Boulevard with the sound of gunshots in the distance and people running for safety. Later footage shows a convoy of ambulances heading towards the scene.

Liège police said Tuesday afternoon that the attacker’s motive was to “target the police”. 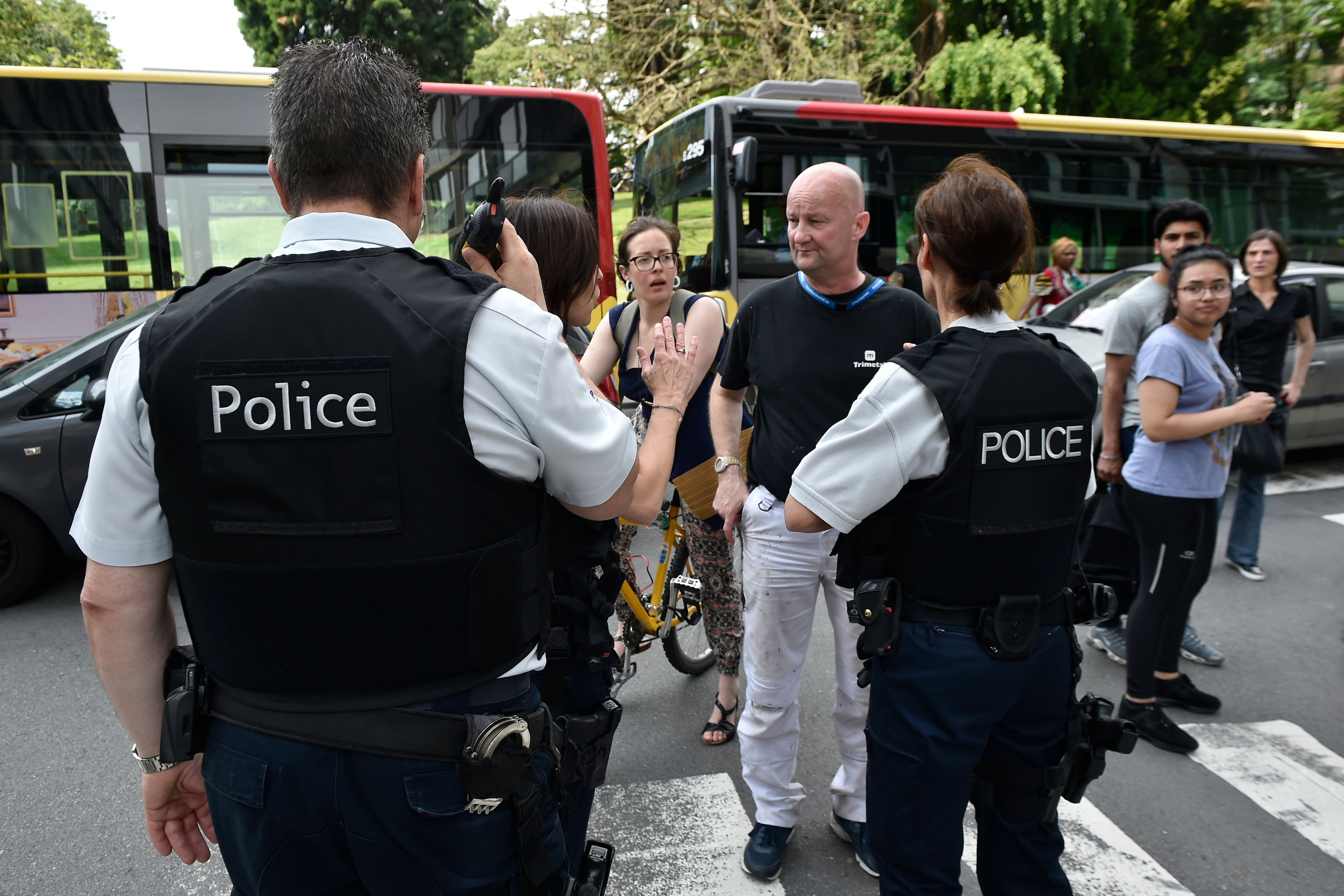 A police officer speaks with parents of children at a nearby high school in the eastern Belgian city of Liege on May 29, 2018, after a gunman shot dead three people, two of them policemen, before being killed by elite officers. – The shooting occurred around 10:30am (0830 GMT) on a major artery in the city close to a high school. “We don’t know anything yet,” the spokeswoman for the Liege prosecutors office, told AFP when asked about the shooter’s motives. (Photo by JOHN THYS /AFP/Getty)