London police chief Cressida Dick’s decision to include victims of the 7/7 terror bombings in her figures when defending her force’s performance amid an apparent London crimewave has been seriously questioned, with the matter referred to the Home Affairs Select Committee.

Dick, Commissioner of Police of the Metropolis under Labour Mayor Sadiq Khan, raised eyebrows when she dismissed concerns about murders in the British capital — where monthly homicides outstripped New York City for the first time in centuries in February and March — by selectively using statistics to overstate claims about London’s declining crime rate.

“If you compare the homicide rate … when I was a commander in the Met 12 years ago it was 250 and I can remember investigating the murders of young people at that time,” she told the Home Affairs Select Committee earlier this week.

“I regret every single [murder] but I do think we have to have some context.”

It has now been revealed that she was talking about 2005, when 52 people were killed by radical Islamic terrorists in a series of suicide terror bombings targeting the public transport network after The Times raised queries over the statistics.

In contrast, the terror killings at Westminster Bridge, London Bridge, Borough Market, and Finsbury Park were not included in annual figures for 2017, and victims of terrorism are not typically included when trying to determine trends in the murder rate in general.

Although murders are indeed less in 2017 than in 2005, the fall is much less steep than claimed by Dick after she anomalously included the terror attack deaths, and today is rising from the low seen in 2014, with 2018 on present trend set to beat the 2017 figure. 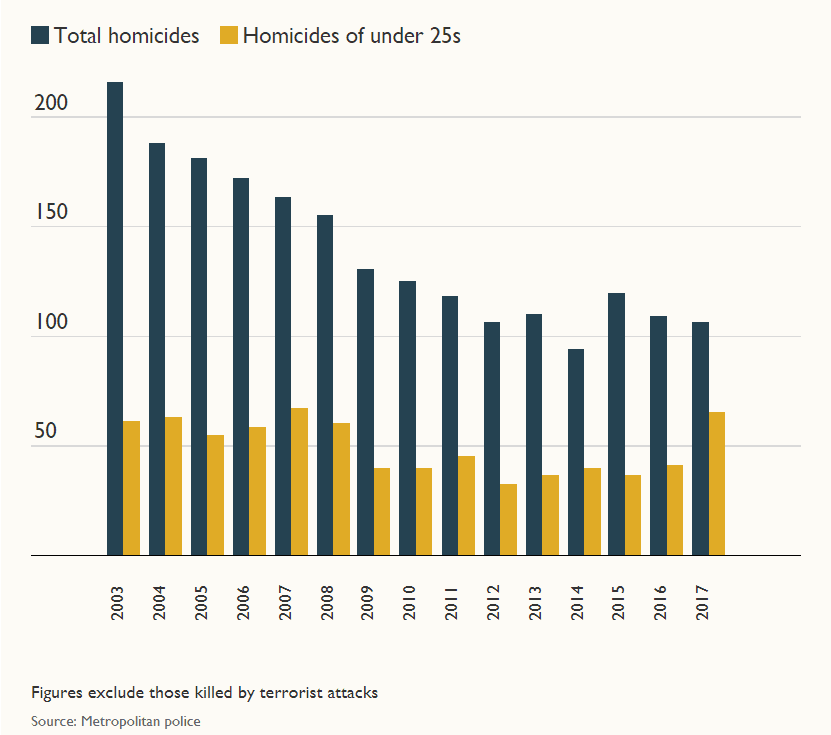 Source: Metropolitan Police via The Times

While mentioning the “murders of young people” in passing, Commissioner Dick appeared to side-step the alarming rise in youth homicide despite the decline in homicide overall in her comments.

This saw a particularly sharp spike in 2017, and 2018 has seen a spate of shocking incidents in which a number of youths — including under-16s — have been stabbed and even shot, despite Britain’s draconian gun controls. Despite Dick’s claims, serious youth violence like this is now higher than it was even in 2005.

Another element in the change in murder rates in London not apparently taken into account by Dick are significant increases in survival rates for major trauma over the last ten years, as surgeons have adopted battlefield techniques developed in foreign war zones for use in domestic hospitals, and adopted basic best practice such as routine use of tourniquets.

The establishment of Major Trauma Networks in 2012 managed to increase the chances of surviving a major trauma injury by 20 per cent by 2013, and by an astonishing 50 per cent by 2015.

The London Air Ambulance charity — which attended more stabbings and shootings than road traffic collisions for the first time in its 30-year history last year — has also been significantly expanded in recent years, launching a second helicopter in 2016.

It is not easy to exactly determine how many more murder victims there would be today if London was still operating using the same techniques and services as in 2005, but it would likely be a significant shift.

Politicians, law enforcement officials, and commentators from the mainstream left, right, and so-called ‘centre’ have offered a variety of explanations for the rise in violence among London youths, including Mayor Khan’s campaign against stop-and-search, police cuts, drill music, and the breakdown of traditional nuclear families.

Mass migration may be another possible driver, with one black British gang member telling the London Evening Standard that “In the last 10 years, since the Somalis and the Congolese came to London, they taught us a whole new level of violence,” in July 2017.

“These people had seen family members mutilated so when they said, ‘I’m gonna smash you up,’ us guys would be shouting, ‘Yo blud, wot you mean?’ and they would just pull out a blade and juk [stab] you in the chest,” he said.

“It upped the speed and level of violence for us British-born guys. We had to arm up to protect ourselves. It created an upward spiral.”