A husting for the Lewisham East by-election was shut down by abusive “anti-fascists” who shouted “UKIP scum” at the party’s candidate and disrupted his speech.

Labour’s candidate in the by-election, to be held this Thursday, appeared to support cancelling the event and a senior member of the party attended the protest.

Around 50 so-called “anti-fascists”, holding signs made by the radical left wing group Stand Up to Racism, attempted to block the entrance to the event at the Catford Salvation Army Hall Tuesday evening.

Footage supplied to Breitbart London by UKIP candidate David Kurten, a member of the London Assembly, shows the activists swearing and cursing as he entered the building with the help of police at around 7 pm.

Some 150 #antiracists on @AntiRacismDay protest against #Islamophobic Anne Marie Waters and #ForBritain in #Lewisham tonight pic.twitter.com/T83cABvxac

A woman claiming to be from ‘Lewisham anti-racists’ also disrupted his speech inside the event, ranting for nearly two minutes.

“I always find it a little bit amusing when white people call me a racist,” Mr Kurten chuckled as the woman was finally dragged from the room and the crowd cheered.

The event was completely shut down by police just 20 minutes later due to public order concerns, as the crowds outside continued to grow.

“Last night’s episode when the Lewisham East by-election hustings were closed down by a far-left mob was a chilling event reminiscent of Hitler’s brownshirts who used violence and intimidation to shut down opposition parties and opponents,” Mr Kurten told Breitbart London. 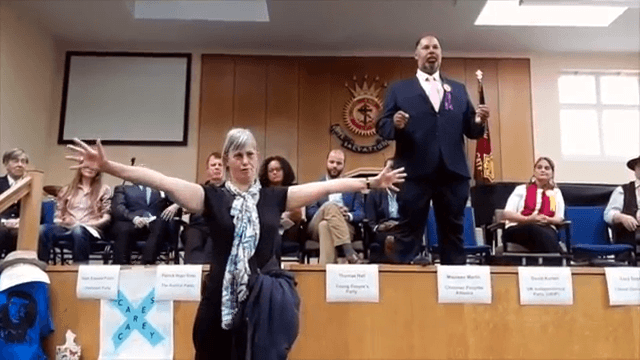 “There can be no doubt that freedom of speech is under attack from the far-left. It is clear that they disdain democracy and want to prevent voters from hearing candidates and making up their own minds and opinions.

“If far-left censorship of people with different opinions is allowed to continue, then the United Kingdom, once the champion of free speech, is headed to a dark place.”

Over 80 out in Catford with hustings shut down in opposition to Ann Marie Waters and the racist For Britain: "For Britain NO WAY, our Muslim neighbours are here to stay" pic.twitter.com/Giabw5GCub

Last Friday, Stand Up to Racism Lewisham issued a “call to cancel” the event on their website and the Labour candidate, Janet Daby, said she would not attend and debate her opponents, labelling them “far right”.

Her office said in a statement: “Janet will not share a platform with the far right parties who have been invited, urges the organisers not to provide them with this platform, and urges fellow candidates not to give these far right groups the oxygen of publicity by appearing with them on this platform.”

Those attending the protest outside the event included Claudia Webbe, a member of Labour’s National Executive Committee and a prominent supporter of party leader Jeremy Corbyn.