One of the two migrant men arrested in the fatal stabbing of a man in the German city of Chemnitz, which led to mass street protests, has been revealed to have had several prior convictions and was set for deportation.

The man, 22-year-old Iraqi Yousif A., was identified after the police arrest warrant for him and Syrian migrant Alaa S., 23, was leaked online earlier this week. New revelations about the Iraqi failed asylum seeker show that he has been in trouble with the law and been convicted of crimes but had not been deported, Kronen Zeitung reports.

Records from 2016 and 2017 show the various convictions including a two-year suspended sentence for serious bodily injury, a fine for property damage, a drug possession conviction and another for drug dealing, and a conviction for fraud. He was also shown not to be in possession of a valid residency permit, fueling speculation as to why he had not been deported.

German newspaper Die Welt also revealed that the 22-year-old had first claimed asylum in Bulgaria and was scheduled for deportation in 2016 but was not because the agency in charge took longer than six months.

A resident of the asylum shelter where Yousif A. lived described him as smoking a lot of cannabis and drinking alcohol and added that he “always had a knife” on him for defence purposes.

Both he and Alaa S. are suspected of stabbing a 35-year-old German named Daniel Hillig on Sunday who later died of his wounds in hospital following the brutal attack.

On Sunday evening, 1,000 residents of the city formed a spontaneous demonstration after being called upon by a local far-right football hooligan firm. Several reports claimed that members of the Sunday protest had targetted anyone who looked like a foreigner with at least three criminal complaints being filed.

A larger protest was held on Monday with estimates of around 7,500 people attending. 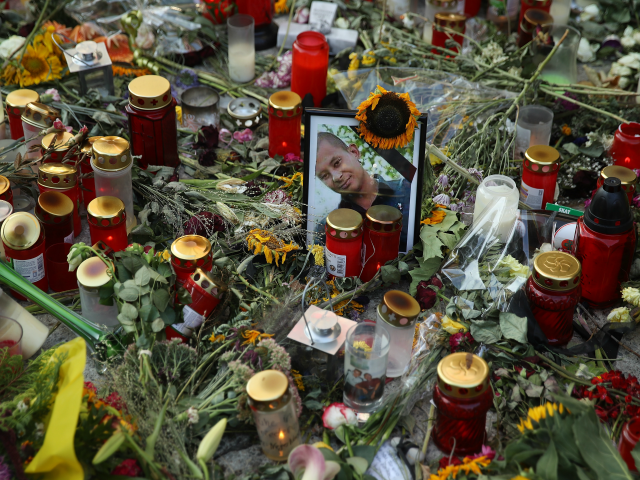 CHEMNITZ, GERMANY – AUGUST 29: A photograph of Daniel Hillig stands at a makeshift memorial of flowers and candles at the spot where he was stabbed and later died of his injuries in the city center on August 29, 2018 in Chemnitz, Germany. Two refugees, one from Syria, the other from Iraq, have been arrested as the suspected attackers / Sean Gallup/Getty Images

“I came to this livable city with great enthusiasm, which has left behind very disturbing events in recent days,” he said and added: “Decent people live here in Chemnitz. You should not put them under general suspicion”, he said.

The protests have been widely condemned as “far-right” by the German media and most recently by United Nations High Commissioner for Human Rights Zeid Ra’ad Al Hussein.

Mr Hussein reacted to reports of a small number of people giving Hitler salutes during one of the protests saying: “I think it’s fundamentally important for politicians across Europe to denounce this.”