The Afghan migrant who stabbed two American tourists at Amsterdam’s Centraal Station on Friday “had a terrorist motive”, according to Dutch police.

Authorities also revealed on Saturday that the migrant, identified by Dutch authorities as 19-year-old Jawed S., had a German residency permit.

“Following an initial statement it has emerged the man had a terrorist motive,” authorities said, according to the BBC.

Police are searching his home at an undisclosed location in Germany and have taken away “computers and phones”.

Despite this pointing to a terrorist attack, Dutch National Coordinator for Counter-Terrorism and Security Police said the national threat level would remain unchanged at “substantial” — one below the nation’s highest threat level — and the country would not increase security measures, saying: “The way the police acted shows that Amsterdam is prepared for this sort of incident.”

Dutch Prime Minister Mark Rutte, who leads a left-liberal coalition government, wrote on Facebook that “This cowardly deed shows how important it is to be and to remain alert.” 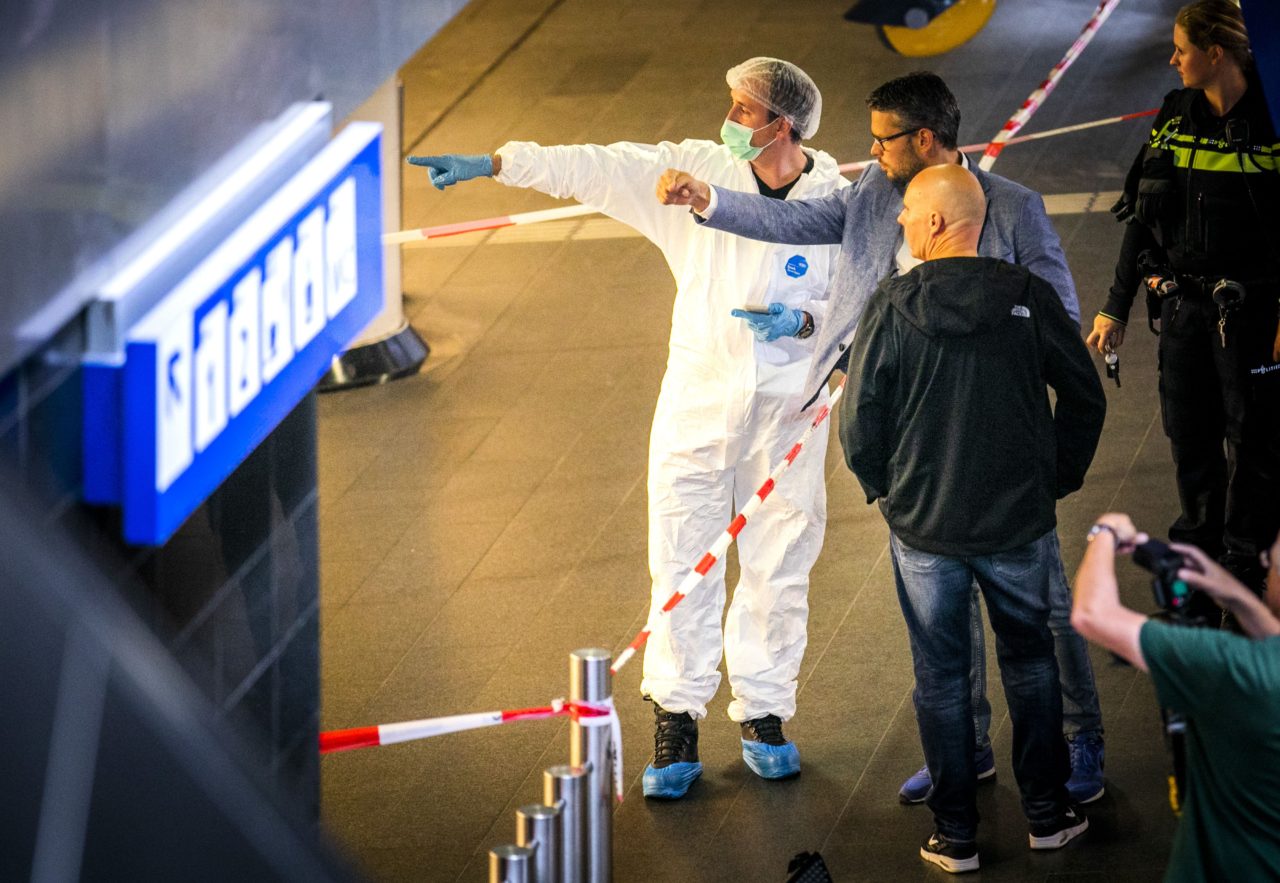 Policemen and forensics are at work after a stabbing incident at the central station in Amsterdam, on August 31, 2018. – The Police have shot a suspect after two people were stabbed. The stabbing was possibly an act of terrorism, said the police. The suspect and two other people who were injured in the stabbing incident were taken to hospital. (Photo by REMKO DE WAAL/AFP/Getty Images)

U.S. Ambassador to the Netherlands Peter Hoekstra confirmed on Saturday that the two victims of the stabbing were U.S. citizens visiting the country.

Their names have not been released, though Dutch media reported both were men — at least one a young man. Their families have been informed, and it is understood that both victims are in satisfactory condition in hospital.

“We are aware that both victims were U.S. citizens visiting the Netherlands and have been in touch with them or their families,” Mr Hoekstra’s office confirmed.

Dutch authorities told AFP that they do not believe the Americans were targetted and that the stabbings were random; however, The Hague embassy advised all American travellers to register with the Smart Traveler Enrollment Program whilst visiting abroad.

The Afghan migrant was shot and wounded by police at the Dutch train station, which is a major transport hub that sees some 250,000 commuters pass through it daily, on Friday after stabbing the two tourists and is being held in hospital under police guard pending a court hearing on Monday.

The Americans had been waiting at an information desk when they were attacked with what was described as a “very large knife”. One witness said that he saw a man with a bleeding wound to his hand “stumble” into a flower shop and later saw another man lying on the ground.

Richard Snelders told the Dutch ANP news agency that, “Shortly afterwards I heard some shots and I know something has gone badly wrong.”

“The first thing that comes up in your mind is that it’s a terror attack. After all, you are at Amsterdam Central Station. There was a lot of panic,” Mr Snelders added.

There have been several terror attacks in Europe since the onset of the migrant crisis in 2015, when Germany’s Angela Merkel opened the doors of the European Union to over one million migrants from the Middle East.

The news of the attack comes days after Dutch police arrested a 26-year-old man, reportedly from Pakistan, on suspicion of planning an attack on Party for Freedom leader and anti-Islamisation campaigner Geert Wilders, who was co-ordinating a ‘Draw Mohammed’ cartoon competition.

The Dutch free speech advocate, who despite coming second in March 2017 national elections was frozen out of the governing coalition by Rutte, cancelled the event to “avoid the risk of making people victims of Islamist violence” after threats had been made by Islamic extremists towards Dutch people.

“It’s not just about me,” Wilders said, adding that Islamists “see not only me, but the entire Netherlands as a target”.

The last major terror attack in the Netherlands was the murder of film-maker Theo Van Gogh in 2004 by Amsterdam-born jihadist Mohammed Bouyeri. The Islamist shot and stabbed the great-grandnephew of artist Vincent Van Gogh in reaction to the artist producing a documentary with author Ayaan Hirsi Ali which criticised Islam’s treatment of women.

American tourists have been affected by the rising threat of terror and crime in Europe, when last summer four young female American women were attacked with acid at the Marseille train station in France last September by a woman reported to have mental health issues.

Earlier this year in June, an American woman was brutally raped just yards from London’s iconic Trafalgar Square while she was on vacation visiting the capital.