Belgian MEP Guy Verhofstadt has said Hungary’s billboard campaign mocking the Eurocrat’s claim there is no migrant crisis reminds him of “the darkest days in European history,” and has called for the EU to speed up mechanisms to punish countries like Hungary and Poland for deviating from “European values.”

On Wednesday, the conservative Fidesz party-led Hungarian government launched a billboard campaign outside of Prime Minister Viktor Orbán’s office in Budapest, displaying an image of the colourful Eurocrat with the caption: “Hundreds have died in terrorist attacks since 2015… But Guy Verhofstadt says ‘We don’t have a migration crisis ‘ This is insane!” 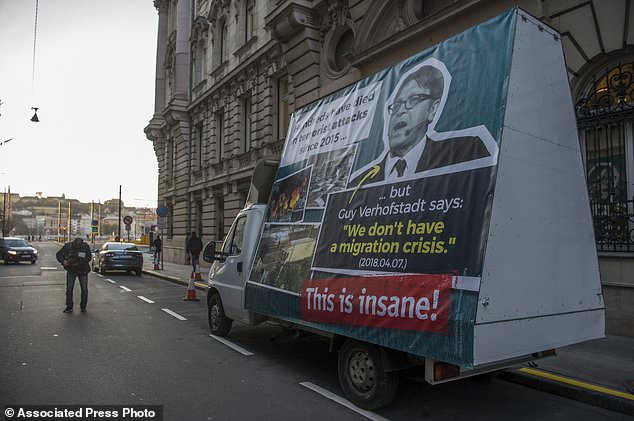 A huge photo of the leader of the Alliance of Liberals and Democrats for Europe in the European Parliament Guy Verhofstadt is seen on the billboard of a van parking in front of the Prime Minister’s Office after it was introduced by government spokesman Zoltan Kovacs during his press conference in Budapest, Hungary, Wednesday, Nov. 28. 2018. (Zoltan Balogh/MTI via AP)

Hungarian government spokesman Zoltán Kovács said that his country will respond in kind to political attacks, saying that the billboard, mounted on the side of a truck which will tour Budapest before travelling on to Brussels, communicates the “unequivocal message of our thoughts on migration and liberal migration policy.”

The first shot fired in the Brussels-Budapest Billboard Wars was by Verhofstadt in early November, when he launched his own mobile billboard tour around Brussels, and then on to Budapest, bearing a poster claiming Prime Minister Orbán “wants to destroy Europe.”

Hundreds have died in terrorist attacks in EUR since 2015. But @guyverhofstadt says “We don’t have a migration crisis.” He and cabal of European liberals push a pro-migration agenda. That’s insane, and we won’t let it go unanswered. Our message coming soon to the streets of BXL. pic.twitter.com/fdDhaGYxFn

The leader of the liberal ALDE group of the European Parliament reacted to the Hungarians’ volley Thursday by claiming that it has “crossed a line.”

“The amalgamation of migrants and terrorists is disgusting,” he said, neglecting to acknowledge that since 2014, more than 1,000 people have died or been injured on European soil in Islamist terror attacks by asylum seekers, many of which used the migrant crisis to enter the continent unchecked and illegally.

Alluding to comparisons between the Hungarian government and 20th-century German Nazism, the Eurocrat added: “It reminds me of the darkest days in European history. This must stop. I expect our leaders in the Council, especially from the EPP [the group to which Fidesz belongs], to act immediately on the alarming report the Parliament sent to them already in September.”

Not very original, Viktor. First you copied your policies from Putin, then you took money from the EU and now you steal my campaign ideas. You'll have to do better than that in May 2019! https://t.co/xNX5qnz7b4

In an interview with euronews that same day, the liberal federalist said that he hoped that under the next Commissioner, who will be appointed after the European Parliament elections in May 2019, the bloc would “create new means to respond faster” to so-called “breaches of Union values.”

“We should create the powers to apply sanctions if necessary — including financial sanctions — that can act as effective deterrence,” Verhofstadt said.

He singled out Hungary and Poland for criticism, claiming that their “nationalist governments” have been “playing with fire for the last couple of years.”

“Compromising on EU values would mean selling out on our integrity: these values were not up for negotiation when Poland, Hungary and others joined the EU and they are not up for discussion today either,” he said.

In the past year, the European Parliament and European Commission launched Article 7 proceedings against Poland and Hungary respectively, for alleged breaches of European values.