As the EU confirmed it was spending taxpayers’ cash on migrants seeking to break into the bloc, Bosnians have pleaded for the Balkans migration route to be shut down amidst increasing “militancy” from newcomers.

Authorities in border towns in Bosnia, which is outside the European Union, have been struggling to cope with increasingly bold and forceful attempts to push through police lines and onto EU soil since mid-October, when thousands of third world immigrants began camping near the border with EU member Croatia — reportedly following misinformation that Croatia was set to open its frontiers.

In the border town of Bihac, Mayor Suhret Fazlic said the 3,000 or so migrants currently living in the area nearby were presenting a major problem for the city with “militant behaviour” and committing hundreds of criminal offences.

“First of all, it is necessary to immediately stop the arrival of new migrants,” he told Euronews this week, adding that he believes that residents of Bihac should receive “some kind of compensation for the damage caused” by the influx of newcomers to the area.

On Thursday, the EU Commission announced it would be spending an additional €500,000 of taxpayers’ money on “humanitarian assistance” to third world migrants camping in the Balkans with the intention of illegally crossing into the bloc. 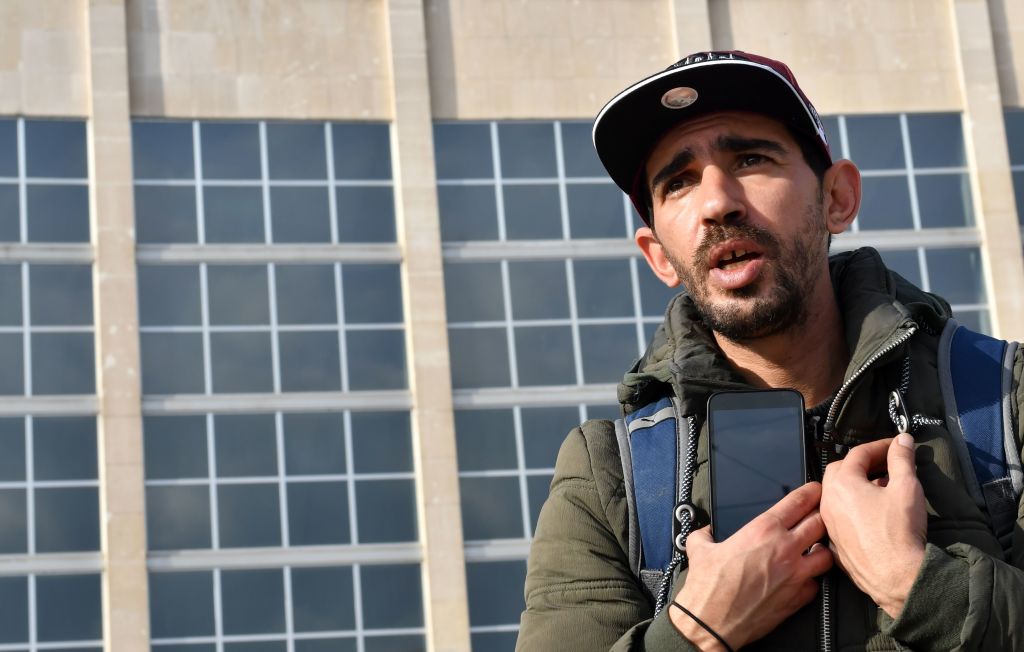 Reda Zerrouki, a 36-year-old Algerian, who is among thousands of migrants crossing the Balkans in hopes of reaching Europe, explains the importance of his smartphone in front of Main Railway Station in Sarajevo, on November 7, 2018. For Zerrouki, his smartphone is more than just a way to message family and friends, it is also a crucial tool used to map his route through the Balkans region and avoid police patrolling the borders as groups of migrants chose to leave Bosnia and attempt an illegal crossing into neighbouring Croatia hoping to travel further into the EU countries. (Photo by ELVIS BARUKCIC / AFP)

“Refugees and migrants continue to arrive in Bosnia and Herzegovina and the EU is committed to provide humanitarian assistance to those in need,” Aid Commissioner Christos Stylianides boasted in a statement which noted Brussels has spent €31 million on migration-related projects in the region since 2015.

Earlier this week, the UN Migration Agency/International Organization for Migration (IOM) admitted “80 to 85 percent” of immigrants attempting to break into the EU from the Balkans are “economic migrants and not people who need international protection”.

IOM coordinator for the region, Peter Van der Auweraert, said “roughly 35 percent are Pakistanis”, accounting for the largest proportion of migrants, while around 20 percent claim to be from Syria.

“But concerning the Syrians, I have doubts because we also have a number of people from North Africa who say they are Syrian,” he added, telling Euronews: “In total, between 20,000 and 21,000 people have entered Bosnia since the beginning of the year and 4,500 of them are still here.

According to reports in Austrian media last month, European intelligence from the Balkans has alleged that “ninety-five percent of these migrants who are trying to break through [the Croatian border] are young men, almost all of whom are armed with knives.”

In terms of migrants’ maintenance and day-to-day living costs in Bosnia as they attempt to break into Croatia, sources at the Austrian Interior Ministry’s migration department said the supply of provisions to illegal immigrants appeared to be “fairly well-coordinated”, with many of them allegedly equipped with prepaid debit cards provided by the United Nations High Commissioner for Refugees (UNHCR).

Breitbart London reported at the time:

According to the refugee agency’s website, such cards are supplied to migrants as part of its “programmes for direct cash-aid to the displaced” in cooperation with Mastercard, which in 2016 announced it was distributing prepaid debit cards to provide migrants travelling towards EU nations through Serbia with “mobility, flexibility and dignity”.

While the mainstream media has repeatedly scorned rumours that George Soros is helping finance illegal immigration to Europe and the U.S., Mastercard reported last year it was partnering with the open borders-backing billionaire on ventures to “catalyse and accelerate economic and social development for … refugees and migrants”.