Christmas is coming — so naturally the climate grinches have gone into overdrive to make you as miserable as possible with lots of scary, made-up stories about how the planet is doomed and how it’s all the fault of your selfishness, greed, and rampant consumption.

Here, courtesy of Paul Homewood, is a bumper seasonal selection of their distortions, half-truths, and lies.

Migrating Salmon Will Get Lost

According to the Daily Mail:

Salmon are losing their powerful sense of smell because of carbon dioxide being absorbed by the ocean, according to new research.

When carbon dioxide in the air is soaked up by a body of water it breaks apart and makes the ocean more acidic.

Scientists found that this increased acidity has a significant affect on how salmon process smells and is causing them to get lost on their trips back to their breeding grounds and making them easy prey for predators.

After exposing the fish to higher levels of CO2, they saw that they were able to smell the odours but their brain did not know how to process them.

While there are generous grants available to research junk science like this, we will continue to be bombarded by this nonsense.

The whole idea that we somehow have a perfect, goldilocks type climate is transparently absurd. Salmon have been around for millions of years, during which time CO2 levels have gone up and down, without any obvious impact on salmon.

While the two things do not necessarily correlate, commercial capture of wild salmon has been steadily rising at the same time as CO2 levels have been increasing. 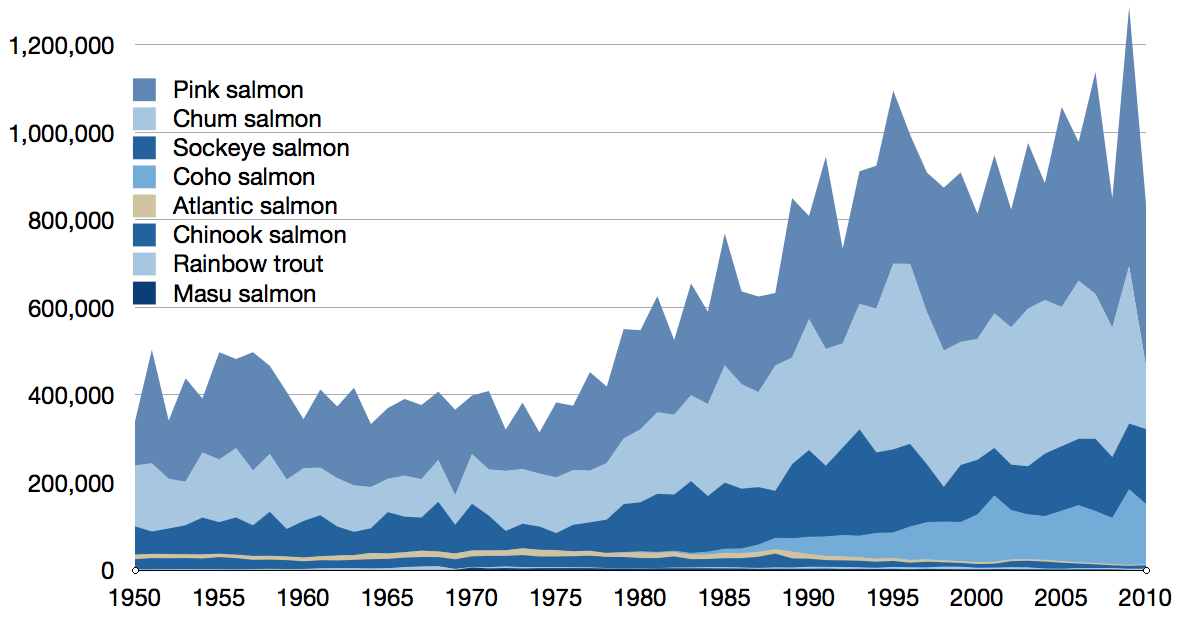 Commercial capture in tonnes of all true wild salmon species 1950–2010, as reported by the FAO[

The idea that the world’s oceans have a constant PH is in any event a myth. It can vary considerably from one part of the world to another. Not only that, PH levels can fluctuate in specific locations.

Arctic Reindeer Are in Decline

According to the BBC:

The population of wild reindeer, or caribou, in the Arctic has crashed by more than half in the last two decades.

A new report on the impact of climate change in the Arctic revealed that numbers fell from almost 5 million to around 2.1 million animals.

The report was released at the American Geophysical Research Union meeting.

It revealed how weather patterns and vegetation changes are making the Arctic tundra a much less hospitable place for reindeer.

I am highly suspicious when I hear claims like this. After all, reindeer have been a key component of Eurasian high latitude ecosystems for at least 2 million years, during which the climate in the Arctic has varied enormously.

We know that the Arctic has been warmer than now for most of the last ten thousands, most recently during the Middle Ages. So why did not Reindeer all die out then?

[…] In short, reindeer population grew strongly between 1970 and 2000, by when it exceeded the carrying capacity of the range. Since then increased hunting and wolf predation have been the major factors in the decline of the reindeer population, back to historical normal levels.

According to the BBC programme Outside Source:

The next report is about the African penguin population and how it’s rapidly declining. Conservationists are saying their habitat is being hit by rising tides caused by climate change.

And it’s interesting that since that report by the UN last week on climate change, so many different organisations have been coming forward to emphasise the importance it has on their work.

According to Homewood, who complained — twice — to the BBC that the subsequent report made no mention of climate change but laid the blame fairly and squarely on overfishing. (The BBC grudgingly upheld his complaint.)

This is not an isolated instance of false claims being made about climate change by the BBC. They now seem to be making a habit of it.

But what makes this instance particularly remarkable is that somebody, whether the presenter or his production team, simply invented this claim out of thin air. After all, they should have known that the report from South Africa made no mention of rising tides or climate change at all.

Then, to make matters worse still, they nonchalantly added:

And it’s interesting that since that report by the UN last week on climate change, so many different organisations have been coming forward to emphasise the importance it has on their work.

It is almost as if all BBC news personnel are under orders to hype climate change, whether the facts justify it or not.

According to the BBC:

Snowy mountain winters are being “squeezed” by climate change, according to scientists in California.

Researchers who studied the winter snowfall in the mountains there revealed that rising temperatures are reducing the period during which snow is on the ground in the mountains – snow that millions rely on for their fresh water.

They presented their findings at the American Geophysical Union meeting – the world’s largest gathering of Earth and space scientists.

“Our winters are getting sick and we know why,” said Prof Amato Evan, from the Scripps Research Institute in San Diego, who carried out the investigation. “It’s climate change; it’s rising temperatures.”

Even the headline image is grossly misleading. Comparing one year with another is merely weather, year to year variations, but the BBC have used it to deceive people into thinking that these are permanent, ongoing changes.

As for the body of the report, the first question that has to be raised is why the study only goes back to 1980? After all, that marked the time when the PDO switched to warm phase. We know warm PDOs tend to coincide with higher rainfall for California, much of which of course falls as snow.

If we look at winter precipitation in California back to 1895, we find that there is absolutely no trend at all.

Afternoon fatigue, the slump that office workers often experience, could become a worldwide problem due to surging levels in carbon dioxide.

A factor in sick building syndrome is higher carbon dioxide levels in poorly ventilated workplaces which can make workers feel lethargic, low in energy and slow, The Sunday Times reported.

But increased levels of carbon dioxide could not just affect office workers but the entire population by the end of the century, according to scientists at University College London.

The only people who seem to be getting stupider because of climate change are the journalists who write articles like this.

As one of his commenters notes, submariners operate in CO2 concentrations many times higher than this:

Those American submariners must be like zombies then, as the US navy tries to keep the co2 level in subs at no more than 8000 ppm -yes, eight thousand.

“We try to keep CO2 levels in our U.S. Navy submarines no higher than 8,000 parts per million, about 20 time current atmospheric levels. Few adverse effects are observed at even higher levels.”