The Daily Mail published its retraction on Saturday, saying it had removed a December 10th article with the headline ‘Is global warming WORSE than we thought?’ because the climate change study on which it was based was found to have “errors in the data”. 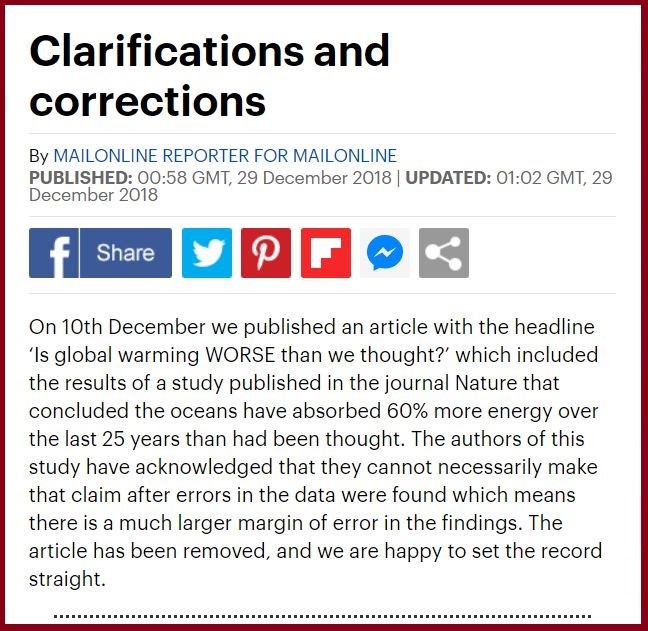 The study, conducted by Laure Resplandy of Princeton University and nine other researchers, was published in the journal Nature and its accompanying press release was titled ‘Earth’s oceans have absorbed 60 percent more heat per year than previously thought’. The paper suggested that the earth is more sensitive to fossil-fuel emissions than what was commonly believed.

Even prior to the Mail’s publication of the first climate change piece, however, independent climate scientist Nicholas Lewis had examined the Nature study and found that Resplandy and her team had significantly “miscalculated” the trend in ocean warming and published a paper laying out the errors in the original report.

Lewis posted his correction of the Nature study in early November, more than a month prior to the Mail article based on its erroneous data.

The alert folks at the Global Warming Policy Foundation (GWPF) drew attention to Lewis’s paper as well as all the fawning press coverage that had been heaped upon the erroneous study.

“It’s regrettable that the Mail published this article, and inexplicable that they should have done so a month after the errors were uncovered,” said GWPF director Dr Benny Peiser.

“It’s good that they are withdrawing it, but in reality the damage has been done,” he said.

The author of the disavowed Mail article, Victoria Bell, published a similar, follow-up essay on December 19th, titled ‘Global warming is WORSE than we thought’, which is still on the Mail website.

In her second article, Ms Bell asserts that claims that there was a pause in global climate change between the years 1995 and 2013 have been “disproved by experts.”