Yesterday I gave you one reason to hate the BBC: its outrageous treatment of Tommy Robinson.

Here’s another: its relentless lies about climate change – such as its recent bullshit claim that:

“…since 2005 the number of floods across the world has increased by 15 times, extreme temperature events by 20 times, and wildfires seven-fold.”

If this claim were true – and the BBC certainly acted as if it was, splashing the story across its environment pages, bigging it up on its flagship Today programme – then it would be a very big deal.

Those figures, no question, would represent a significant jump in the kind of “extreme weather events” that climate alarmists warn us we should expect in this alleged era of catastrophic man-made global warming. Only a fool could ignore such clear evidence of imminent catastrophe.

But of course, the claim isn’t remotely true. As Paul Homewood discovered it came via an organisation called GMO – of which more in a moment – from a database called EM-DAT (The International Disaster Database), which logs reported natural disaster events over time.

The key word in that sentence is “reported” – for it’s the one that gives the lie to the BBC’s ludicrous, hysterical and thoroughly stupid claim.

Back in the day, numerous natural disaster events around the world went unreported because news coverage was less extensive and communications were so much poorer.

This becomes obvious from this chart: 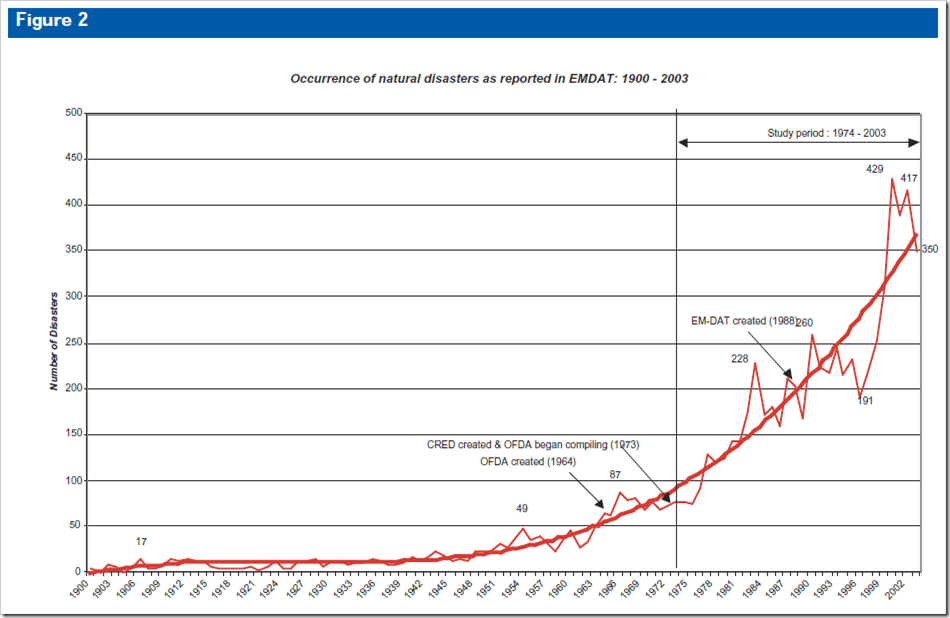 Nobody in their right mind would believe that there were hardly any natural disasters in the first half of the 20thC. Many disasters happened in the past, but which don’t appear in the official stats.

But how come there has been a dramatic increase in such reported events since 2005? Simple. As Homewood shows, the methodology has changed: data collection methods have grown more rigorous; there has been a huge increase in “specialised agencies” reporting on disasters and also a steady increase in the number of insurance companies reporting on disasters (as it’s in their interest to do because this scares potential clients into taking out insurance).

Any responsible reporter – even ones as fanatically parti pris as BBC’s resident alarmist Roger Harrabin  – ought have smelt a rat and dug deeper into these statistics rather than simply regurgitating them unquestioned.

Clearly, the EM-DAT database is not to blame here. It’s just doing what it claims to do, nothing more.

No, the real villain of the piece is this spivvy character who devised this “white paper” by torturing the EM-DAT data until it screamed: 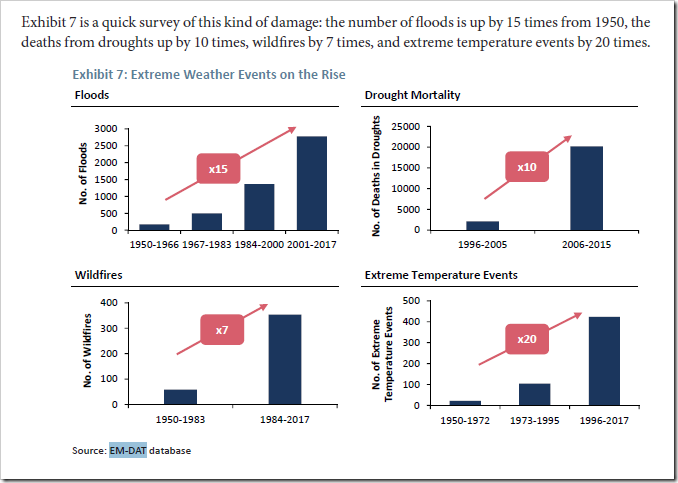 Gosh – not Jeremy Grantham, as in the eco-loon hedge fund billionaire who is a key player in the Climate Industrial Complex, both heavily invested in the great climate scare and also one of its chief promulgators?

It most surely is! GMO stands for Grantham, Mayo, van Otterloo – his asset management firm.

Grantham funds the Grantham Institute on Climate Change at two London universities, Imperial College and the LSE. Their job, essentially is to give a veneer of scientific credibility to climate scare propaganda.  Among their employees is a failed palaeopiezometrist and part-time pit bull impersonator Bob Ward who spends his time harassing sceptical journalists (by reporting them to the press regulatory body IPSO every time they write something true which he disagrees with). They also have on their books various tame activist-scientists who have found that it’s very much in their interests to push the alarmist ‘consensus.’

One of these, as Homewood notes, is one Joanna Haigh – who backed up the dubious claims on the Today programme – never mentioning that her own employer had been ultimately responsible for the misleading report.

In a functioning democracy this would be a major scandal: Britain’s state broadcaster – with its massive advantages of entrenched market share and its compulsory subsidy via the licence fee – is abusing its power and prestige to promote alarmist, junk science scare stories cooked up by green activist reporters using dubious reports by hedge fund billionaires who are profiting from the climate scare.

As Christopher Booker observed at the weekend in his Sunday Telegraph column, “the supposedly impartial BBC should hang its head in shame at its relentless bias.”

But like the growing scandal involving dodgy Lord Deben, the sleaze bag head of the government’s Climate Change Committee, it’s most unlikely that the BBC’s malfeasance and mendacity will get much traction in the mainstream media.

The problem is that Britain’s current political and media Establishment contains far, far too many pigs swilling their snouts in the Great Green Trough.

And not nearly enough swineherds to stop them.