Far-left Antifa extremists have been blamed for the attack on the the political management school in Lyon founded by French former populist MP Marion Maréchal.

Ms Maréchal said she would be submitting a formal complaint about far-left extremist violence after the attack on her Institute for Social Sciences, Economics, and Politics (ISSEP) occurred late Tuesday night, Le Figaro reports.

A far-left extremist Antifa group named “Anti-fascist group Lyon” took credit for the attack writing on Facebook, “On the night of March 26th to 27th, we attacked ISSEP […] the school created by Marion Maréchal Le Pen which opened new year 2018 in order to form an elite of the far right.” 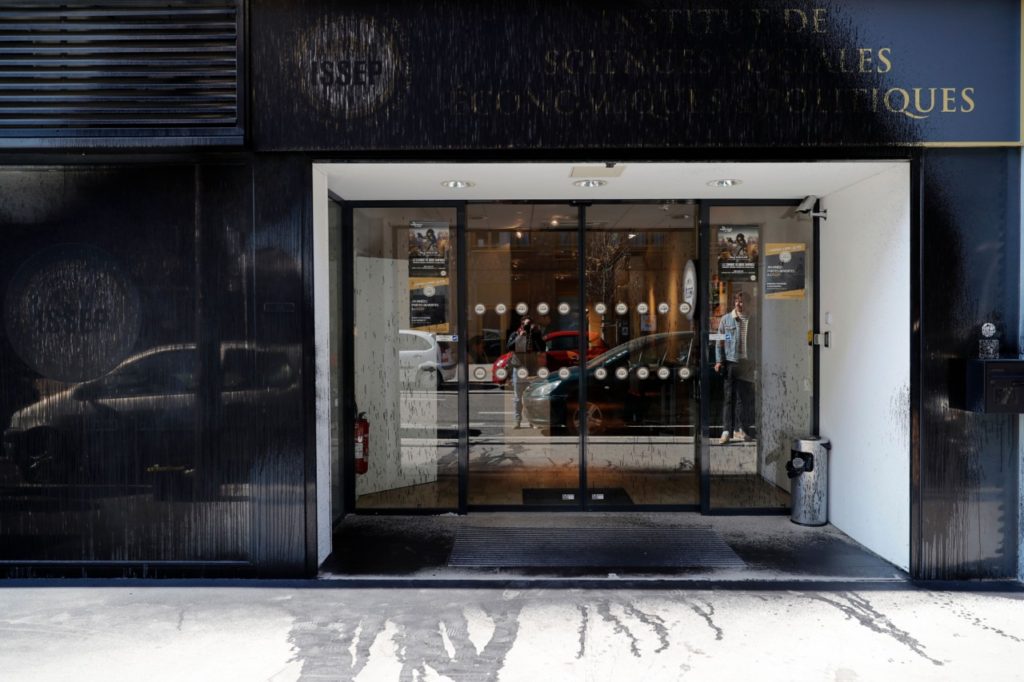 The entrance and the logo of the “Institut de Sciences Sociales Economiques et Politiques”, (ISSEP) are partially covered with tar in Lyon, on March 27, 2019, after it was vandalised overnight by far-left activists, who claimed the attack on social networks. (Photo: ALEX MARTIN/AFP/Getty Images)

“Consider this attack as an answer to all racist, sexist, homophobic, transphobic acts, as well as deadly anti-migration policies and the Christchurch bombing,” they added in the post which has since been removed.

Maréchal told Le Figaro, “We will use all legal channels to enforce the freedom of education in France, obviously violated by violent leftist militias and whose members are known to police.”

“They think they are free enough to claim their actions on their Facebook page. This is to say their feeling of impunity. In addition to filing a complaint, I will ask for an appointment with the prefect, the rectorate, and the mayor of Lyon to take preventative measures against such threats to the safety of my institution,” she said.

In a press release, the ISSEP said that the Antifa extremists had smashed a window with a hammer, attempted to force locks, and had covered the facade of the building with black paint.

The attack echoes that against the hipster-right Identitarian movement in Halle, Germany, that saw Antifa extremists attempt to break into their building with a drill and spray butyric acid inside. The extremists also set fires and smashed nearby cars.

Earlier this year a party office of the populist Alternative for Germany in Döbeln was firebombed, with many suspecting Antifa being behind the attack.

In Italy, far-left groups have been even more radical with an anarchist group bombing an office of Interior Minister Matteo Salvini’s League party in Treviso in August last year.