Populist, anti-mass migration, and Eurosceptic political parties have been predicted to make advances in the next European Parliament, according to an analysis of polling released by the parliament itself.

The European Parliament completed its final meeting of the 2014-2019 session Thursday and marked the occasion by releasing its own projections of how it believes the forthcoming elections to select the members of the next 2019-2024 session will see a surge in populist and Eurosceptic members.

Although the electoral campaigns for the late May election have barely begun — especially in the United Kingdom, where there is some question over whether the vote will take place because of Brexit — the prediction suggests populist groups will surge, but would fail to unseat the centrist-right group from top position. 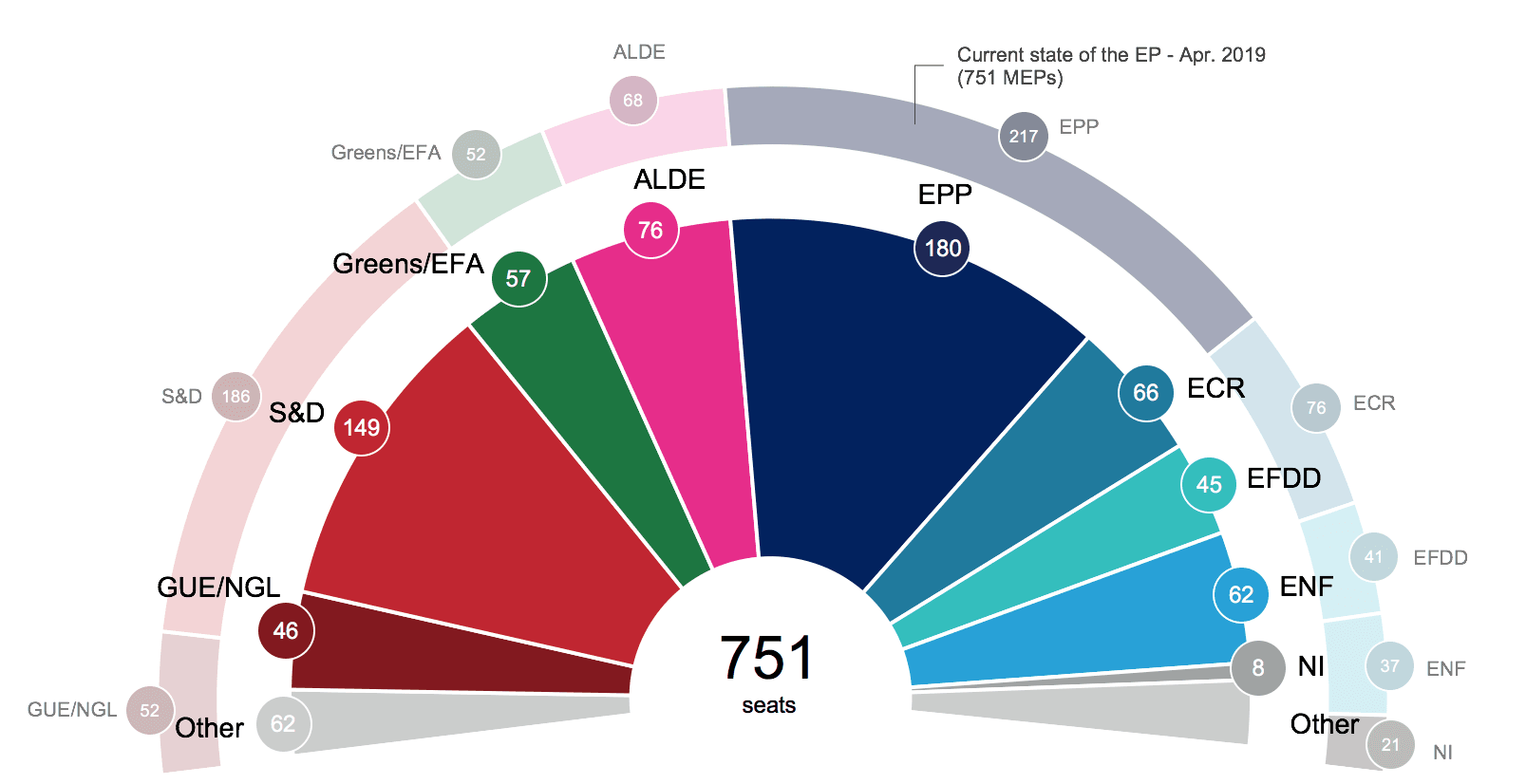 The European People’s Party (EPP), the centrist-right group dominated by Angela Merkel’s Christian Democrats which has been the largest faction in every EU election since 1999 is predicted to come out top again in the assessment, but will be challenged by Eurosceptic groups like never before.

While the prediction sees the EPP falling 37 seats to 180, the more obviously right-wing Europe of Nations and Freedoms(ENF) group which is presently the home of the remains of Britain’s UKIP is set to grow from 21 to 62. The avowedly Eurosceptic Europe of Freedom and Direct Democracy (EFDD) are predicted by the European Parliament to pick up another four seats, taking them to 45.

Meanwhile the main left-wing group the Socialists and Democrats will fall from 186 to an estimated 149.

Yet the wildly fluctuating polling in the United Kingdom on voting intentions for these European Union elections — not to mention the failure of pollsters to predict the outcome of the 2016 referendum on leaving the European Union — show the difficulty of accepting the European Parliament’s estimates as gospel. As Breitbart London reported this week, a new YouGov poll found a significant surge in support for Nigel Farage’s EFDD-affiliated Brexit party from 15 per cent to 27, making them the first ranked party in the United Kingdom.

If the Brexit Party could replicate that poll at the elections, it would be a near-repeat of Nigel Farage’s performance at the 2014 EU elections when the UKIP party which he then controlled gained 28 per cent of the vote.

Further polling this week has shown them also looking to achieve between 17 and 12 per cent. The Brexit party — which only officially launched at the weekend — may be polled more consistently as public awareness of it grows through the election campaign into May.

FLASHBACK: UK Deep State Set Aside Cash for EU Elections in May 2018 https://t.co/oDUUwHyHT1

A 2018 report suggested that as many as one-quarter of Europeans could vote for populist parties, the most ever. In 1998, just seven per cent of Europeans voted for populist parties. More recently, Italy’s League — led by populist interior minister Matteo Salvini — was projected to become the second largest party outright in the European Parliament, and the populist, Eurosceptic Sweden Democrats were predicted to double their vote in the forthcoming election.