A Brexit Party candidate has slammed the “unacceptable, undemocratic” behaviour of a man who threw a milkshake at an election stall while shouting “fuck the Brexit party” among other slogans during campaigning for the forthcoming general election.

The trend of physically attacking political candidates because of their policy positions that established itself during the European Parliament elections in May appears to have made the jump to the General Election campaign, with Brexit Party candidate Mitchell Feierstein being the latest figure to have had a drink hurled at him during a campaign event.

Manning a stall in the English town of Reading while canvassing for votes on Sunday, Anglo-American Brexit candidate and financial journalist Mitchell Feierstein said the drink was thrown from a distance of “six feet” which missed him, but which landed on the stall table instead.

Mr Feierstein told Breitbart London that the attack was witnessed by “a crowd that included many small children, and older adults who were subjected to witnessing this attack on freedom of expression. This intolerance is unacceptable, undemocratic, and should never happen.”

In a statement provided to police, Feierstein said the individual he claimed threw the drink was “a white male, approximately [six feet tall], slim build with dyed-blonde hair” and shouted obscenities including “Fuck you! Fuck the Brexit Party, and fuck Nigel Farage!” before running away. The candidate continued: “The police are currently examining CCTV footage to identify him and his whereabouts.”

“To peacefully protest, to express dissent, to engage in political discourse — these are the building blocks of any democracy. However, assaulting political candidates, destroying property, and impeding lawful campaigning — seriously? What happened yesterday is a criminal offence. It is repugnant and is not to be tolerated by any civil society.”

The Reading Chronicle reported the remarks of other candidates standing in the seat who condemned the attack, with Labour’s Matt Rodda calling the incident “an affront to our democracy”, and Conservative candidate Craig Morley commenting: “All politicians should be free to campaign without fear of being assaulted in public. The recent trend of intimidating those who you disagree with in politics is extremely worrying and must stop.” 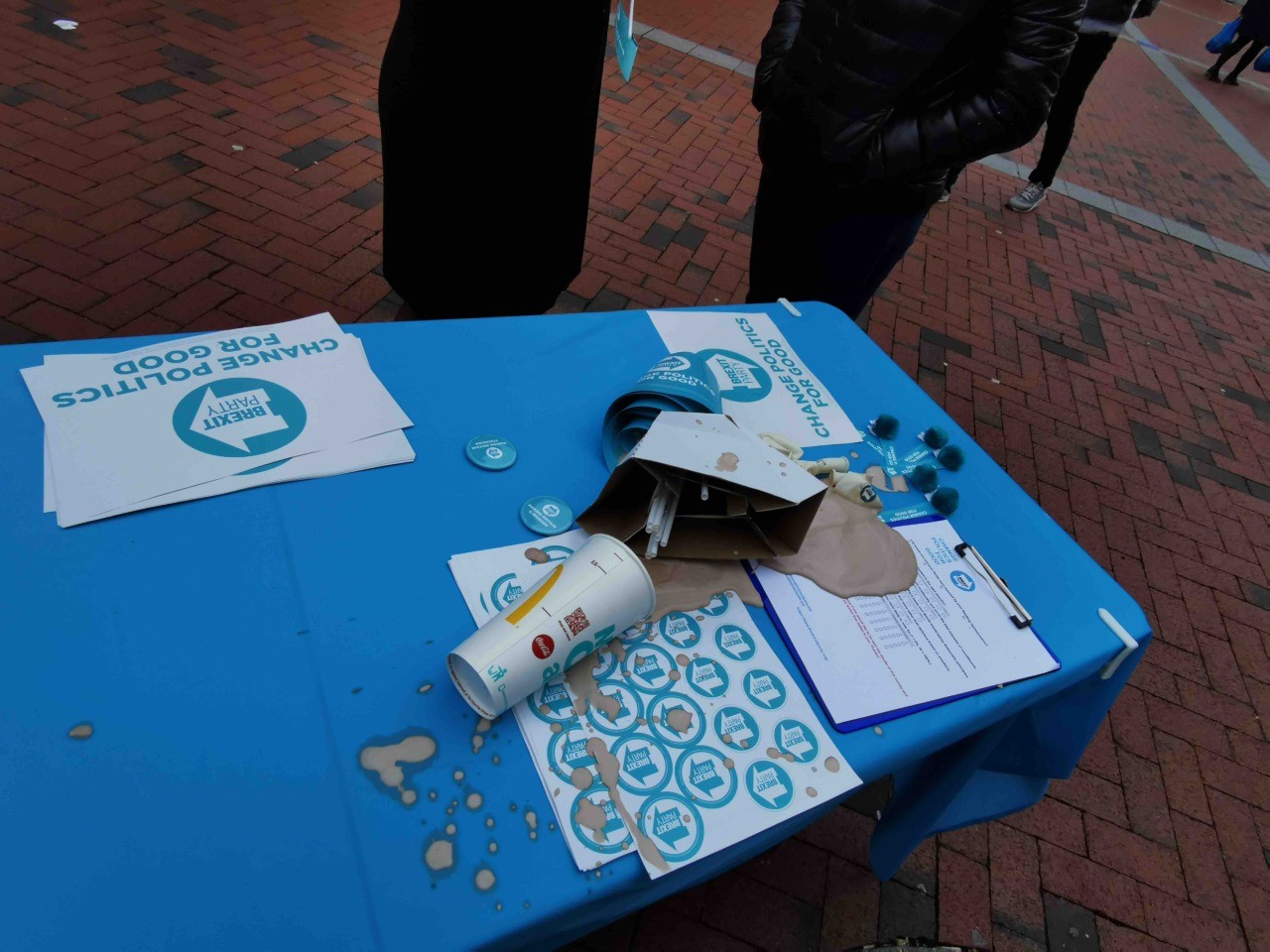 The milkshaking follows several others that took place during the course of the 2019 European Parliament election campaign, which was ultimately won by the Brexit Party, including an attack on party leader Nigel Farage and another on an elderly Parachute Regiment veteran.

Paul Crowther, 32, was later convicted of common assault for throwing his drink over Nigel Farage during a campaign walkabout in Newcastle, but was spared a jail sentence, being ordered to pay £520 in fines and costs and perform 150 hours of community service. The punishment drew inevitable comparisons at the time to a similar assault on Labour leader Jeremy Corbyn, the perpetrator of which was sentenced to 28 days in jail for striking him with an egg.

British comedian Jo Brand subsequently worked the attack on Mr Farage into her act, asking on a radio show why the perpetrator had bothered with a milkshake “when you could get some battery acid?” British police investigated the comments but later cleared Brand of any wrongdoing.