The Liberal Democrats have branded the vote to leave the EU, one of the largest expressions of democratic will in British political history, a “national humiliation”.

The Lib Dems vowed in their manifesto published on Wednesday that they “will stop Brexit”, “revoke Article 50”, and force the country to “stay in the European Union” if they gain enough seats in the House of Commons to form a government.

“In other circumstances, we will continue to fight for a people’s vote [second referendum] with the option to stay in the EU, and in that vote, we would passionately campaign to keep the UK in the EU,” the manifesto pledged.

The liberal-progressive party also vows to stop the Conservative Party’s so-called “hostile environment” to illegal immigration, “save EU freedom of movement”, “promote diversity”, and overhaul the country’s refugee procedures, including taking control of asylum policymaking from the Home Office to the Department for International Development.

However, the Liberal Democrats remain a fringe party, polling in third place. According to a Savanta ComRes poll published yesterday, the Conservatives are in the lead at 42 per cent followed by Labour at 31 per cent, with the Lib Dems at 15 per cent — less than half the support of second-place Labour.

The More Voters See of Lib Dem Leader Jo Swinson, the Less They Like Her: Poll https://t.co/Dnk1M7icC5

The Liberal Democrats received a blow on Monday when they lost their Supreme Court challenge to force broadcaster ITV to invite them to leadership debate between Boris Johnson and Jeremy Corbyn on Tuesday.

The latest in the series of blows for the anti-Brexit party came when polling analysis by The Times revealed that the Liberal Democrat leader, Jo Swinson, has lost voters’ support since she took over the party in July.

Swinson, who echoed her predecessor Vince Cable’s catchphrase “Bollocks to Brexit” at a political rally after becoming leader, was questioned by Sky News’s Beth Rigby on Wednesday night over what was “going wrong” to see her tumble in the polls.

Ms Rigby had asked: “The polling shows that the more voters see of you, Jo Swinson, I’m afraid to say the less they like you… What do you think is going wrong for you?”

After Ms Swinson avoided answering the question, Sky News’s political editor continued: “The polling suggests that you as an individual are more unpopular than the actual party. Do wish you hadn’t put that big picture of you on the bus?” 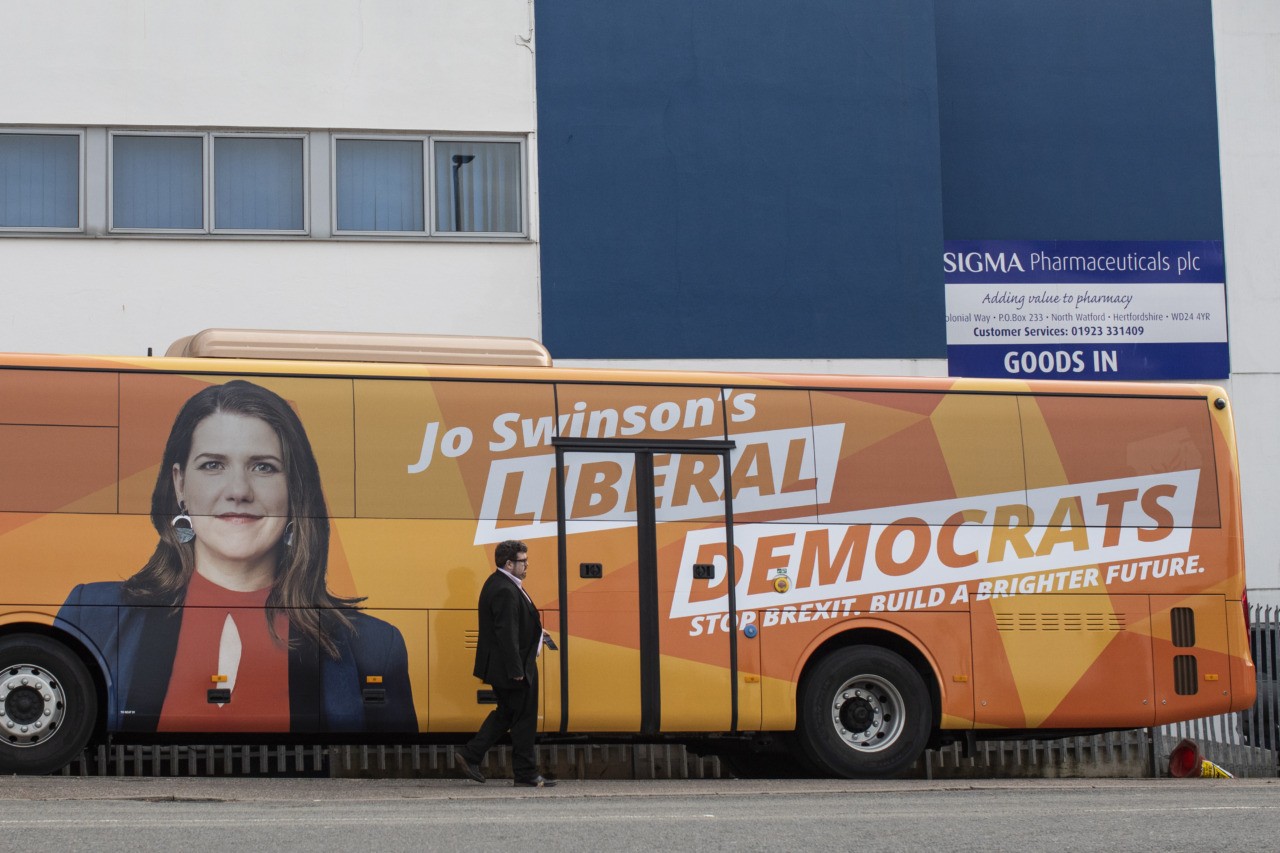 WATFORD, ENGLAND – NOVEMBER 06: The Liberal Democrats’ fully electric campaign bus, one of the first of its kind, as Leader of the Liberal Democrats leader Jo Swinson visits Sigma Pharmaceuticals on November 6, 2019, in Watford, England. (Photo by Dan Kitwood/Getty Images)