“My Lords, and Members of the House of Commons, my government’s priority is to deliver the United Kingdom’s departure from the European Union on the 31st of January,” the 93-year-old monarch began in her second Queen’s Speech of the year, a relatively modest affair stripped of much of the usual pomp and circumstance.

“My ministers will bring forward legislation to ensure the United Kingdom’s exit on that date, and to make the most of the opportunities that this brings for all the people of the United Kingdom,” she confirmed.

The Queen also confirmed legislation would be brought forward to scrap the Fixed Term Parliaments Act, which allowed anti-Brexit MPs to block the Government’s attempts to take Britain out of the European Union while voting down its attempts to call an election to break the deadlock at the same time.

She also referred to measures to “tackle hostile activity by foreign states” — which likely means more trouble for independent and non-mainstream media in the name of combatting supposed “Russian interference” in British democracy. 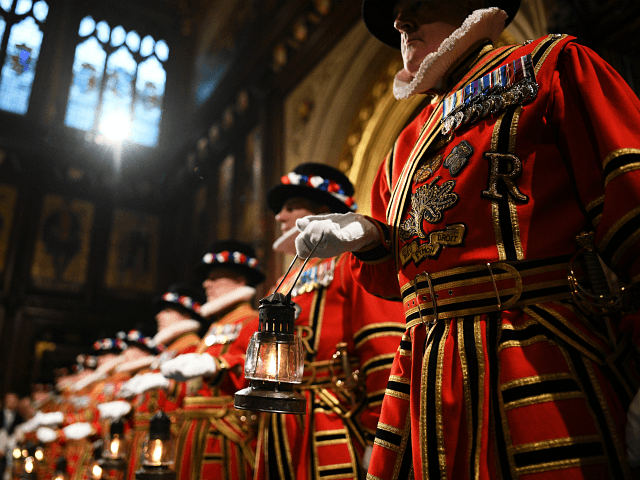 In the second Queen’s speech in two months, Queen Elizabeth II will unveil the majority Conservative government’s legislative programme to Members of Parliament and Peers in The House of Lords. (Photo by Leon Neal – WPA Pool/Getty Images)

On healthcare, the Queen said that her government the “multi-year funding settlement” for the National Health Service (NHS) would be “enshrined in law” — likely an attempt by Boris Johnson to repudiate Labour’s claims that his party has a secret agenda to cut back and ultimately privatise the state-run service.

She also revealed there would be a “new visa” to “fast track” foreign medical professionals into the NHS, which may be welcomed in some quarters and misgivings in others, given the overrepresentation of foreign staff in malpractice cases and sexual assaults on patients.

On immigration more generally, the Queen confirmed Johnson’s commitment to delivering a “modern, fair, points-based immigration system” — but with no mention of a cap and the pledge to reduce net immigration “from the hundreds of thousands to the tens of thousands” observers may come to doubt whether the new system will actually reduce the influx. 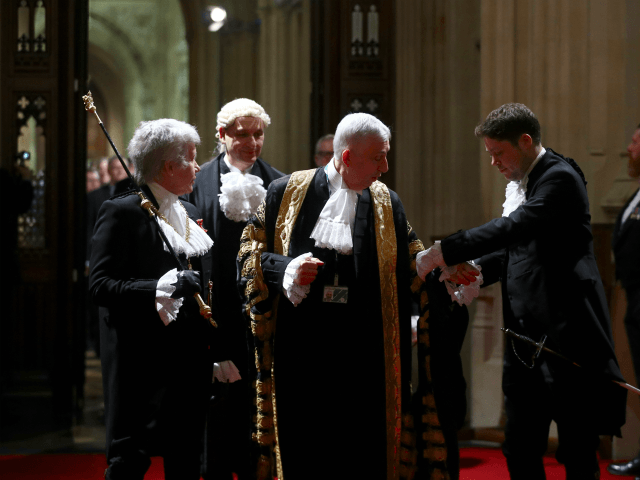 LONDON, ENGLAND – DECEMBER 19: Lady Usher of the Black Rod (L) and Speaker of the House of Commons Lindsay Hoyle prepare for the state opening of parliament at the Houses of Parliament on December 19, 2019 in London, England. In the second Queen’s speech in two months, Queen Elizabeth II will unveil the majority Conservative government’s legislative programme to Members of Parliament and Peers in The House of Lords. (Photo by Hannah McKay – WPA Pool/Getty Images)

On the environment, the Queen said her government would “continue to take steps to meet the world-leading target of net-zero greenhouse gas emissions by 2050” and “continue to lead the way in tackling global climate change”, dashing any lingering hopes of that Boris Johnson may prove less gung-ho on the green agenda than his predecessors.

However, more practical  “legally-binding targets for air quality” and a ban on exporting plastic waste to countries outside the Organization for Economic Co-operation and Development (OECD) may prove fairly popular with ordinary voters, who tend to favour action of clearly observable pollution even if they are not particularly keen on green taxes and lofty aims of carbon neutrality etc. 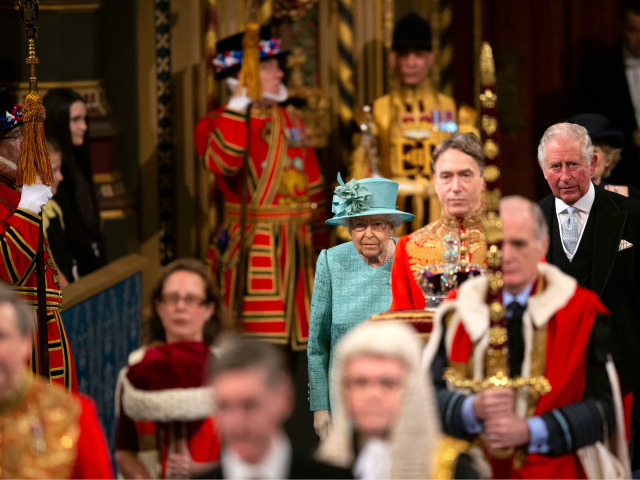 Britain’s Queen Elizabeth II and her son Britain’s Prince Charles, Prince of Wales walk behind the Imperial State Crown as they proccess through the Royal Gallery, before the Queen’s Speech, during the State Opening of Parliament at the Houses of Parliament in London on December 19, 2019. – The State Opening of Parliament is where Queen Elizabeth II performs her ceremonial duty of informing parliament about the government’s agenda for the coming year in a Queen’s Speech. (Photo by Matt Dunham / POOL / AFP) (Photo by MATT DUNHAM/POOL/AFP via Getty Images)

The Queen signalled Boris Johnson would follow through on right-populist proposals to ensure “the most serious violent offenders, including terrorists, serve longer in custody” — which took on new urgency after Usman Khan, a radical Islamic terrorist released from prison halfway through his sentence on an electronic tag, killed a number of people on London Bridge.

However, the policy may ultimately amount to little more than requiring such criminals to serve two-thirds of their sentence in custody before automatic release on licence rather than half their sentence — and could be easily subverted by a broadly anti-punishment judiciary simply taking the new rules into account and handing down shorter sentences.

This could make the potential increase in public safety fairly negligible — although if release becomes subject to review rather than automatic that may somewhat improve the current situation.

The Queen also announced “a Royal Commission to review and improve the efficiency and effectiveness” of the criminal justice system more broadly, which may address some of the horrendous damage inflicted on court infrastructure etc. by austerity, where the Clegg-Cameron, Cameron-alone, and May governments were particularly unforgiving.

Given the domination of the criminal justice world by academics and legal professionals opposed to imprisonment and punishment in principle, however, any sentencing reforms which may come out of such a Commission are unlikely to line up with the public’s wish to see criminals imprisoned at a significantly greater rate and for significantly longer than presently. 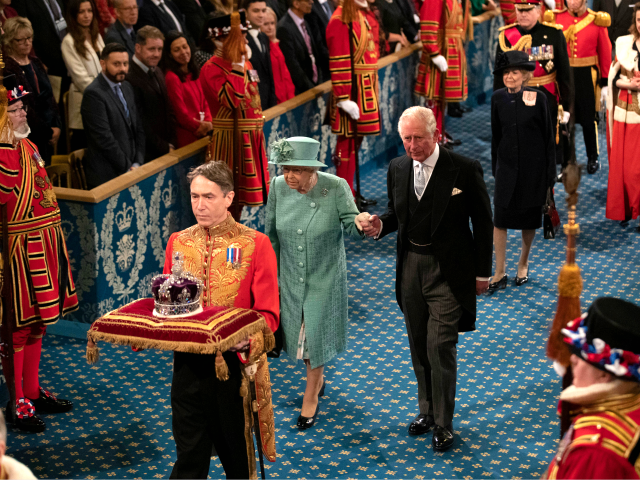 Britain’s Queen Elizabeth II walks with Britain’s Prince Charles, Prince of Wales through the Royal Gallery before delivering the Queen’s Speech at the Opening of Parliament at the Houses of Parliament in London on December 19, 2019. – The State Opening of Parliament is where Queen Elizabeth II performs her ceremonial duty of informing parliament about the government’s agenda for the coming year in a Queen’s Speech. (Photo by Matt Dunham / POOL / AFP) (Photo by MATT DUNHAM/POOL/AFP via Getty Images)

On defence, the Queen said that the Government would enshrine the Armed Forces Covenant in law and try to tackle “vexatious claims that undermine our Armed Forces” — likely a nod to the ongoing legal persecution of aged veterans for supposed crimes in Northern Ireland, which Theres May refused to tackle despite previous public pledges on the issue.

On social care, where an aggressive proposal to secure extra funding for homeowners’ care from the value of their property proved highly damaging to Theresa May in the 2017, the Queen said her government would seek “cross-party consensus for long-term reform” and that nobody would have to” “sell their home to pay for it”.

The Queen also announced some arguably left-populist reforms such as leave for unpaid carers and “homes available as a discount for local first-time buyers”, as well as a business-friendly “increase [in] tax credits for research and development” and “national skills fund”.

The announcement of measures to guarantee “minimum levels of service during transport strikes” may foreshadow a clash with the old trades unions left, however, insofar as it appears to signal a ban of sorts on all-out industrial action. 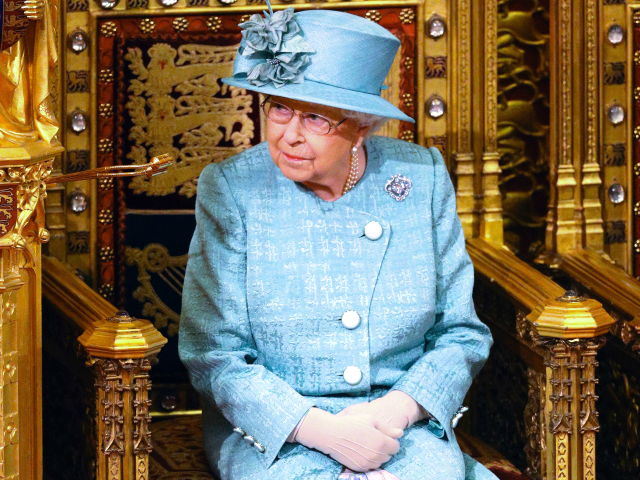 LONDON, ENGLAND – DECEMBER 19: Queen Elizabeth II is seated for the state opening of parliament at the Houses of Parliament on December 19, 2019 in London, England. In the second Queen’s speech in two months, Queen Elizabeth II will unveil the majority Conservative government’s legislative programme to Members of Parliament and Peers in The House of Lords. (Photo by Aaron Chown – WPA Pool/Getty Images)

Concluding her speech, the Queen told the assembled parliamentarians: “I pray that the blessing of Almighty God may rest upon your counsels.”