The Italian government has required the public to fill out paperwork in order to leave their own homes to perform commonplace tasks, such as buying groceries or visiting the hospital. The new quarantine rules are a result of the draconian measures taken by the Italian government in an attempt to stop the spread of the coronavirus.

Italians who are caught outside of their houses without the proper forms filled out could face criminal charges, fines up to €206, and potentially up to three months in prison, reports La Repubblica.

Due to new quarantine rules in an attempt to combat the nation’s coronavirus epidemic, Italians must provide a reason for leaving the house via paperwork that can be printed and filled out so that it can be shown to police. Officers are now stationed at checkpoints on main roads and at transport hubs, asking people to declare their reasons for travel.

According to the Italian government, appropriate reasons for leaving the house only involve urgent needs, such as for a proven work-related reason, a medical appointment, or to buy groceries. 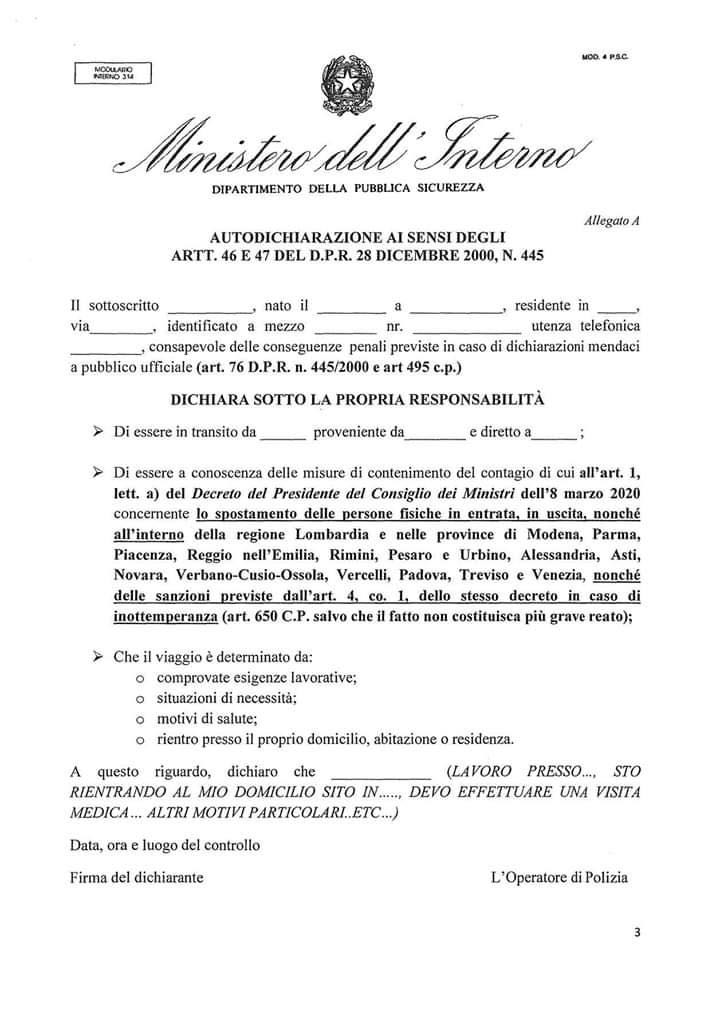 Paperwork declaring an individual’s reasons for moving around is known as “self-certifying,” and people who make false claims on their forms may also face criminal charges.

Police may also simply just tell people to go home if they catch them outside of the house without the proper paperwork filled out.

The paperwork does not apply to those who are living inside Italy’s initial quarantined zones — Lombardy and provinces in other neighbouring regions — as well as for those who have tested positive for the Chinese virus, reports La Repubblica.

For these individuals, there is an absolute ban on movement, with no exceptions, and those who are caught escaping quarantine can face more serious penalties — related to putting public health at risk.

As of Wednesday, a startling 196 people have died in Italy due to the Chinese virus in just 24 hours, which made for the nation’s highest daily rise since the coronavirus epidemic began, bringing Italy’s death toll from 631 on Tuesday to 827 on Wednesday.