Thousands of protesters marched through Westminster, London, on Wednesday afternoon to the city’s initially-peaceful Hyde Park demonstrations in sympathy with protests taking place in the United States over the death of George Floyd in police custody.

Protesters chanted now well-known slogans also seen at a prequel march that took place at the weekend, including “no justice, no peace” and “no racist police”. Chants of “the UK is not innocent” intend to highlight that issues in race relations between the police and public are not limited to the United States.

📺 | Police officers are now being attacked at today's illegal #BlackLivesMatter protest in London.

This unlawful gathering should have been shut down immediately! Prosecute the organisers and get the scum attacking our police officers off our streets! pic.twitter.com/u8UmOy2W4R 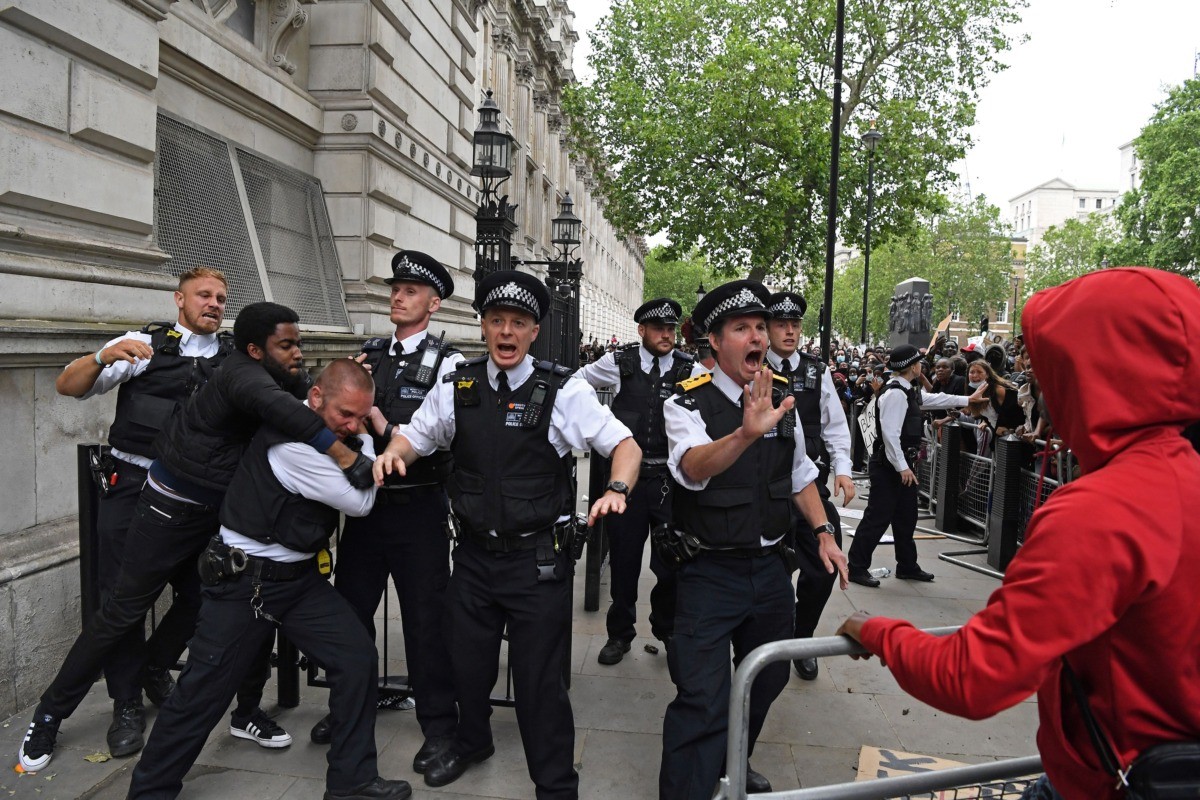 Police officers react as they scuffle with a protestor near the entrance to Downing Street, during an anti-racism demonstration in London, on June 3, 2020, after George Floyd, an unarmed black man died after a police officer knelt on his neck during an arrest in Minneapolis, USA. (Photo by DANIEL LEAL-OLIVAS/AFP via Getty Images) 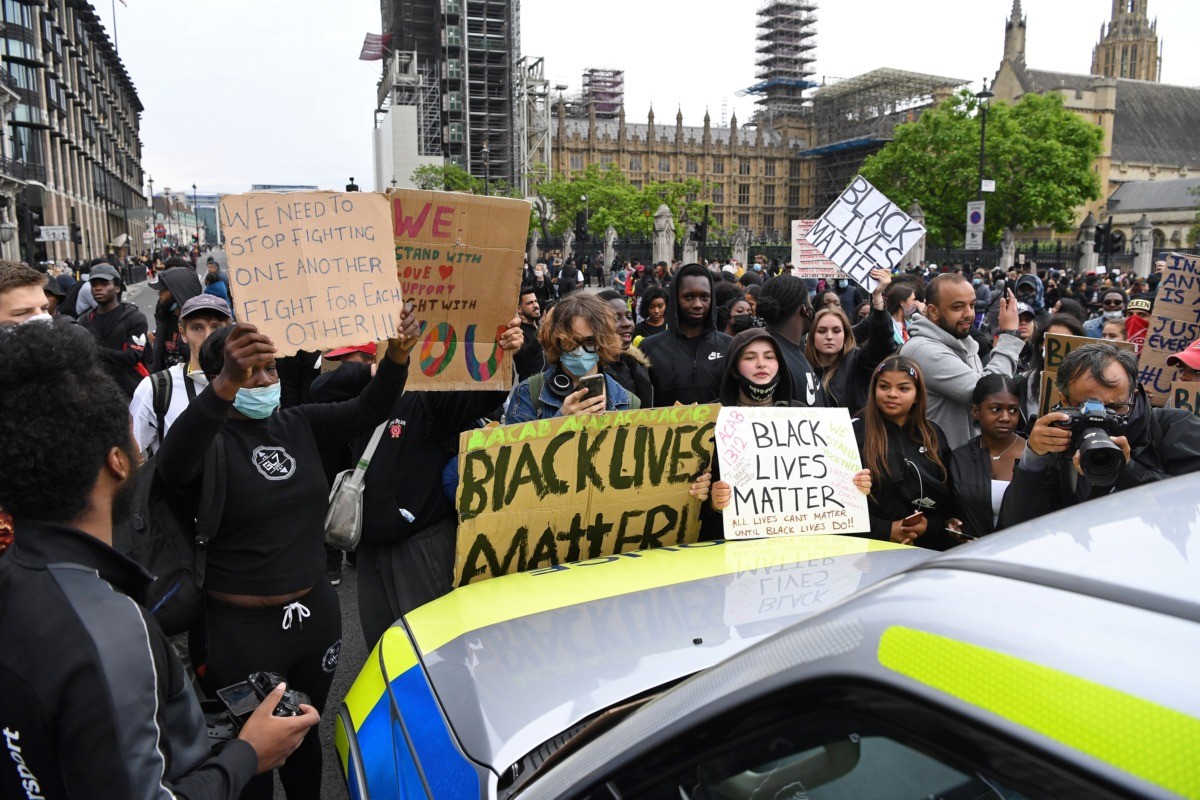 Protestors holding placards gather around a police car, stopped by a lone protestor, in Parliament Square during an anti-racism demonstration in London, on June 3, 2020, after George Floyd, an unarmed black man died after a police officer knelt on his neck during an arrest in Minneapolis, USA. – Londoners defied coronavirus restrictions and rallied on Wednesday in solidarity with protests raging across the United States over the death of George Floyd, an unarmed black man who died during an arrest on May 25. (Photo by DANIEL LEAL-OLIVAS/AFP via Getty Images)

But the protest later descended into scuffles and fighting with police. Punches were thrown, and protesters attempted to scale the railings of the Prime Minister’s Downing Street official office while, indoors and just yards away, Boris Johnson was giving a daily press conference on the coronavirus pandemic. Images captured by an Agence France Presse journalist show a police officer being punched in the face, while another shows an officer being tackled in a headlock while others rush to assist.

British newspaper The Daily Telegraph cited a freelance journalist who said police removed one protester from the crowd, which triggered a sudden surge of violence. Objects reported to have been thrown at officers include a tub of pasta, fruit peel, streets signs, water bottles, and traffic cones.

BREAKING – Crowd confronting police outside the gates of Downing Street. Officer punched in the face, numerous objects being thrown at police now. pic.twitter.com/tJ6ZnXUcv6 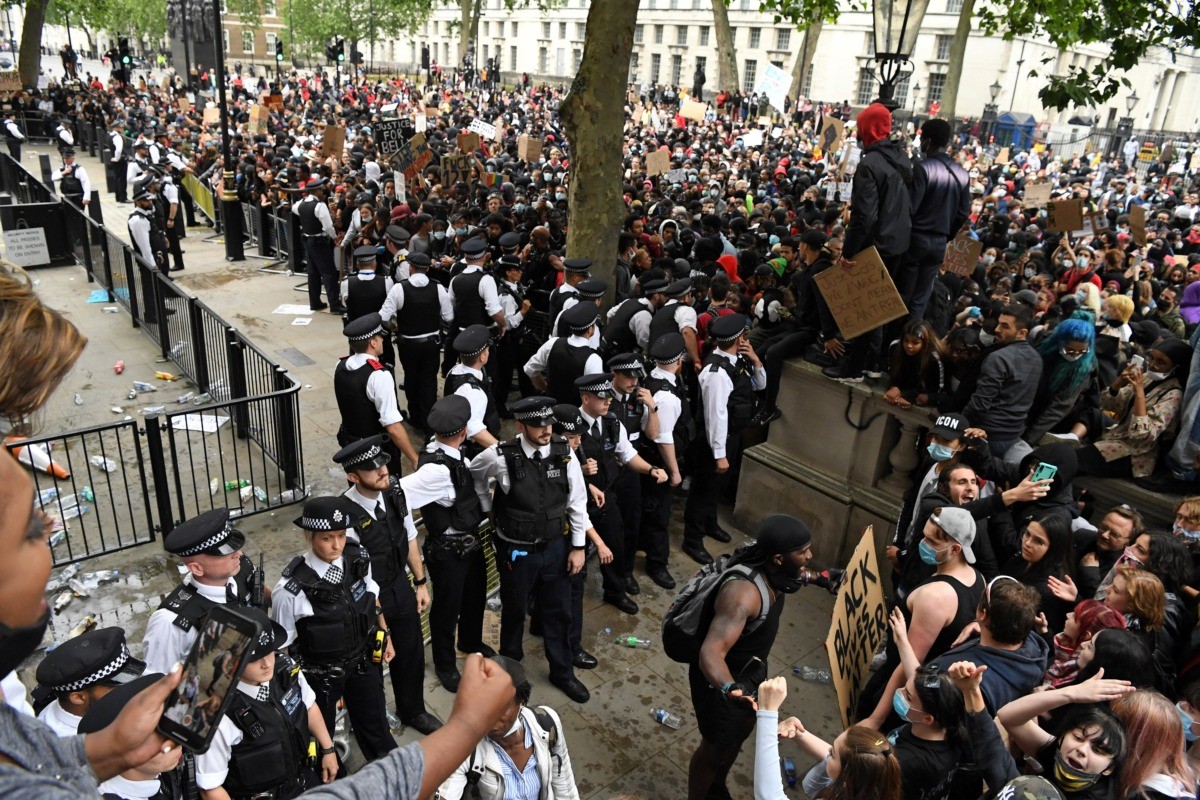 Police officers stand on duty outside the entrance to Downing Street as protestor’s gather on Whitehall during an anti-racism demonstration in London, on June 3, 2020, (Photo by DANIEL LEAL-OLIVAS/AFP via Getty Images)

Acts of contrition by UK police seem to have done little to calm tensions, however. Protesters’ demands of officers on the streets included repeated orders that individual policemen take a knee as a sign of respect, with some doing so. The National Police Chiefs’ Council, meanwhile, released a statement saying UK police “stand alongside all those across the globe who are appalled and horrified by the way George Floyd lost his life”.

The official policing body also reminded protesters that it remains illegal to gather in groups of more than six in the United Kingdom because of the government’s coronavirus lockdown, the Telegraph report noted.

Wednesday’s protest appears to suffer from the same coronavirus-era issues seen elsewhere in other Black Lives Matter sympathy protests in Europe, notably over large groups of people not observing social distancing rules in contravention of national laws. Breitbart London reported on a similar, but ultimately peaceful, protest in Amsterdam, the Netherlands, which invited nationwide criticism after the city mayor not only failed to control the gathering over coronavirus, but attended the march herself without wearing a mask.

The mayor was accused of acting with hypocrisy as she had acted just weeks beforehand to block the city’s annual commemoration of Second World War dead from going ahead, citing coronavirus concerns.

This story is developing and more follows