When I opened Britain’s bestselling tabloid conservative Sunday newspaper, I was greeted by a double-page spread showing a vast mob of Black Lives Matter activists marching on Downing Street in London.

What most shocked me was the caption, which read as follows:

Powerful statement: they came in their thousands, driven by an urge to be heard that overrode the lockdown. A stark, simple message – black lives matter – was etched on the home-made placards they carried as they marched on Downing Street yesterday – before the protest became marred by violence.

Since when did Black Lives Matter / Antifa become such an unimpeachably noble and worthwhile cause that even the right-wing end of the MSM now thinks that it is its job to suspend journalistic principles, conservative values and the interests of its readership?

Since when did even conservative publications consider that it’s the right and moral thing to do to provide covering fire for an increasingly thuggish, openly hard-left, and borderline terroristic group which is less obviously to do with ‘racism’, but which has almost everything to do with smashing Western civilisation?

Mind you, if you think that’s bad, wait till you see the BBC’s version of the weekend’s ugly, violent demonstrations.

Headlines like that – ‘largely peaceful’? – are almost beyond satire. But I thought Madeline Grant had a pretty good stab…

1,500 drown during largely successful maiden voyage of the Titanic https://t.co/eaV104aW1C

This was the ‘largely peaceful” demo, let it be noted, in which a police rider was thrown backwards off her horse onto tarmac after crashing into some traffic lights. The horse had bolted because members of the ‘largely peaceful’ crowd — whose black clothes and masks, of course, were purely a defence against coronavirus and had nothing to do with anonymity — thought it would be a good idea to chuck missiles including a bicycle and a distress flare at it.

If this is what a ‘largely peaceful’ demo looks like, heaven knows what a ‘slightly violent’ one might involve.

Meanwhile, on social media, one of the most widely shared stories involves footage of a statue of 17th slave trader Edward Colston being pulled from his pedestal in Bristol city centre, dragged to the docks and dumped into the harbour.

Here is a BBC-endorsed historian seizing the opportunity to virtue signal that she knows slavery is a bad thing. (Which no one had ever realised up till this point, obviously…)

During #EdwardColston's twelve year involvement with the Company in c17, it transported c 84,000 men, women and children from West Africa as slaves. The enslaved people were branded with RAC, as company property. Nearly 20k died en route, ship conditions were horrific. https://t.co/E0NX7G67vK

Old statues don’t get toppled and dragged into the sea by accident. It requires advance planning — bringing ropes or steel cables along, for instance. Were the citizens of Bristol all consulted, do we think, as to whether or not this piece of their city’s history should be ripped down and consigned to oblivion in the name of hard-left activism? Were the British people asked whether they support having the history of the built environment gradually chipped away by leftist iconoclasts pretending to be cross about the killing of a man 4,000 miles away on the other side of the Atlantic?

Yet the overwhelming narrative across social media today and, depressingly, across much of the mainstream media is that these ugly, sinister shows of force by the triumphant radical left are something almost charming and admirable rather than something we should all fear.

Instead of calling out Black Lives Matter for what it is — essentially the race-baiting branch of Antifa — politicians, even government ministers are kowtowing to it.

So many people rightly motivated to protest or stand in solidarity following the horrific killing of George Floyd. A plea:
To all, please stay safe, protect yourselves.
To the few, please don’t abuse your police officers or criticise officers who show empathetic engagement. 🙏

As also, of course, even more depressingly are the police – several of whom have been caught on camera abasing themselves before the mob by going down on the knees as if to beg for mercy for their ‘white privilege’.

Let’s be clear what is happening here. Under the pretext of protesting the killing of a black man by a white police officer in Minneapolis, hard-left terror cells across the West are taking to the streets and fomenting chaos and violence with a view to overthrowing Western civilisation. These very nasty but cunning and well-organised thugs have used every propaganda trick in the book to persuade gullible teens and early-twentysomethings on social media accounts like Instagram that these protests are good because they’re against ‘racism. And don’t forget, if you’re not with them, then you’re against them and that makes you hateful just like Lily Allen explained in that song she wrote a few years ago about how racism is bad.

But the fact that these rallies largely involve so many gullible, socially-insecure, bubble-headed, virtue-signalling white middle-class kids whose frontal lobes have not yet formed and who want to show their college friends Bella, Minty and Jo Jo that they care about racism too does not let our politicians and our police and our media off the hook.

What is going now across the world, on our streets, is domestic terrorism – conducted by a violent minority whose interests and aims are entirely antithetical to those of the decent, law-abiding majority.

If the authorities — not to mention our MSM — can’t even recognise this very basic, entry-level point, then we’re heading for a whole heap of trouble. 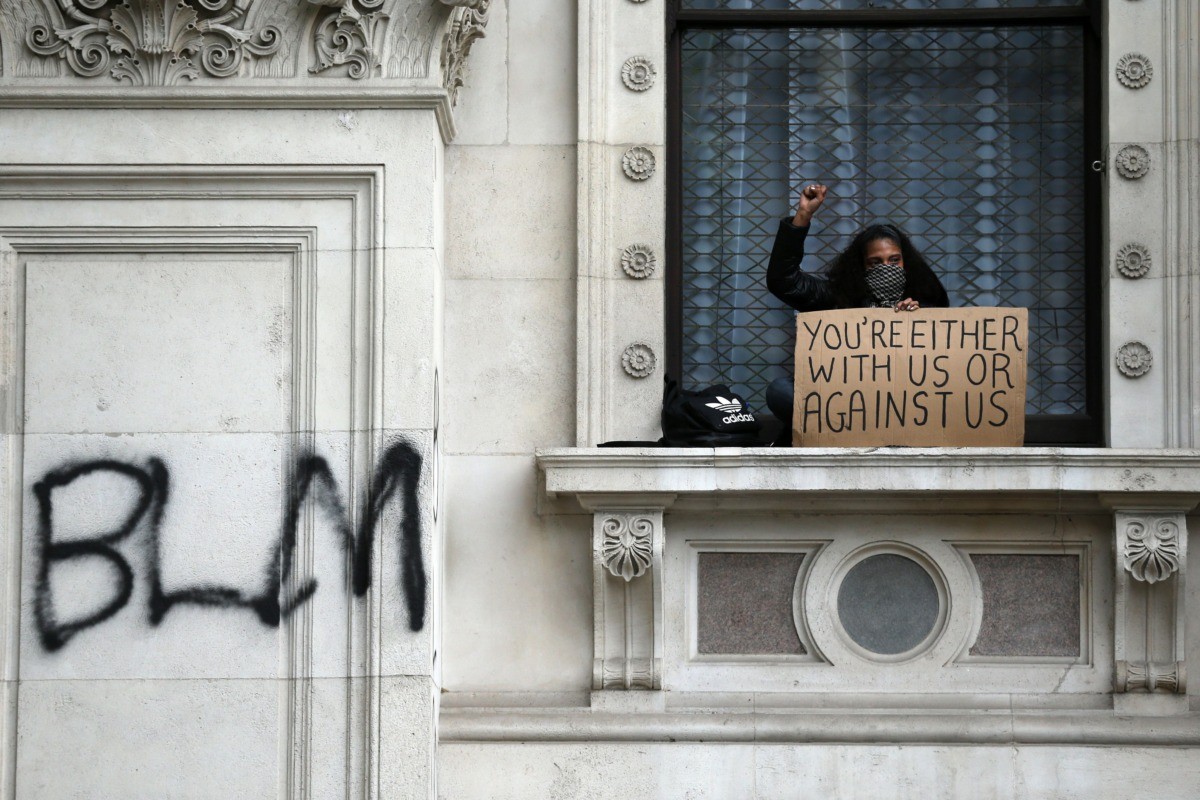 A protester holds a placard as she sits in a window ledge on Whitehall, near Downing Street in central London after attending a demonstration, on June 7, 2020, organised to show solidarity with the Black Lives Matter movement in the wake of the killing of George Floyd, an unarmed black man who died after a police officer knelt on his neck in Minneapolis. – (Photo by ISABEL INFANTES/AFP via Getty Images)