Harkening back to the times of the Cultural Revolution in Maoist China, Sadiq Khan has announced a review of all landmarks in the British capital to determine whether they conform with the city’s values and ‘diversity’, suggesting that the supposedly racist monuments be replaced with tributes to LGBTQ+ and racial minority figures.

As monuments in British cities have been vandalised by Black Lives Matter and Antifa activists in the wake of the death of U.S. citizen George Floyd, the London mayor said that the city he represents is “one of the most diverse” in the world and therefore has tasked the Commission for Diversity in the Public Realm to review the status all landmarks, including statues, memorials, street art, street names, and public murals.

“Our capital’s diversity is our greatest strength, yet our statues, road names and public spaces reflect a bygone era. It is an uncomfortable truth that our nation and city owes a large part of its wealth to its role in the slave trade, and while this is reflected in our public realm, the contribution of many of our communities to life in our capital has been wilfully ignored,” Khan said.

His announcement came after Black Lives Matter radicals tore down a statue of parliamentarian and philanthropist Edward Colston in Bristol over wealth he gained from the slave trade. Over the weekend, activists also defaced the statues of Abraham Lincoln and Sir Winston Churchill in London. Protesters were also witnessed attempting to burn the British flag on the Cenotaph, the nation’s war memorial.

A Black Lives Matter protester who vandalised the statue of Sir Winston Churchill said: “I tagged up Churchill as a racist on the statue of Churchill because he is a confirmed racist. He didn’t fight the Nazis for the Commonwealth or for anything else, or for any personal freedoms.”

“He fought the Nazis sheerly to protect the Commonwealth… against invasion by foreign forces. He didn’t do it for black people, or people of colour, or people of anything. He did it sheerly for colonialism,” the radical added, according to The Mirror.

The London mayor said: “The Black Lives Matter protests have rightly brought this to the public’s attention, but it’s important that we take the right steps to work together to bring change and ensure that we can all be proud of our public landscape.”

In an interview on Sky News, Khan added: “What the commission will do is look at diversity in the public realm in relation to… for the lack of black people on statues or the street’s names after, our LGBTQ+ community, women, those who are disabled, and try to have a city that better reflects London and the values we have.”

Should we rename streets and take down statues memorialising people with troubled histories?

London Mayor @SadiqKhan thinks it's worth considering and has launched a review into how London could better reflect its people and the value they have. MR#KayBurley #BlackLivesMatter pic.twitter.com/dg32yzjlnG

The mayor’s office is also reportedly considering renaming the Tate art museums and Guy’s Hospital in London, whose founders had ties to the slave trade. Khan noted, however, that the commission will consider whether such a move would serve to “cleanse the reputation” of such institutions.

Following the destruction of the Edward Colston statue in Bristol, the leader of the Brexit Party Nigel Farage likened the leftist agenda of the Black Lives Matter movement in the UK to the Taliban in Afganistan. After the takeover of Afganistan by the Taliban in 1996, the group imposed strict Islamic codes and cultures across the country, while destroying vestiges of the country’s pre-Islamic past.

“A new form of the Taliban was born in the UK today. Unless we get moral leadership quickly, our cities won’t be worth living in,” Farage said on Sunday. 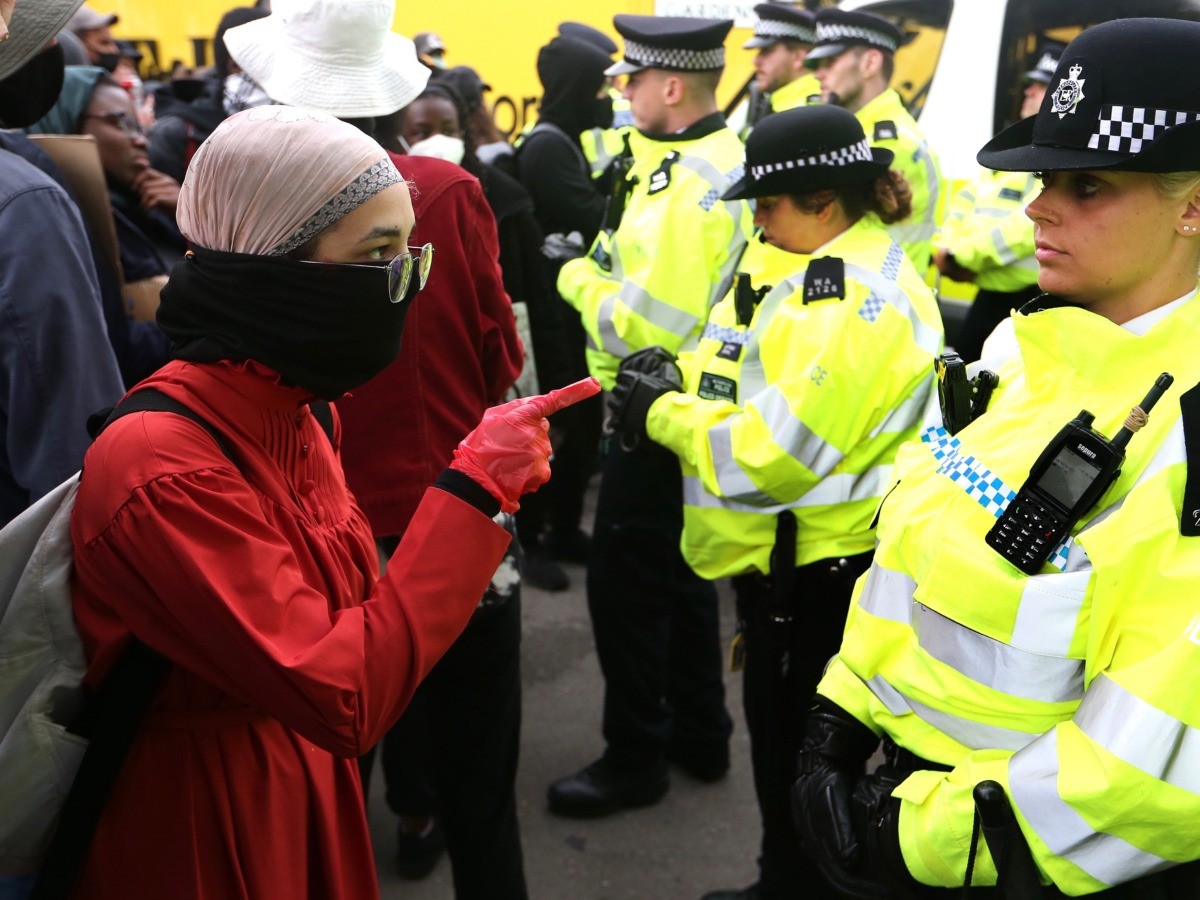 LONDON, UNITED KINGDOM – JUNE 06: A protester confronts a police officer during a Black Lives Matter protest on June 06, 2020, in London, United Kingdom. The death of an African-American man, George Floyd, while in the custody of Minneapolis police has sparked protests across the United States, as well as demonstrations of solidarity in many countries around the world. (Photo by Alex Pantling/Getty Images)

Others have compared the destruction of statues in Britain to the Cultural Revolution in Mao Zedong’s China, in which a youth paramilitary group mobilised by the communist leader swept over the country destroying historical monuments.

The group known as the Red Guards undertook the destruction of what was termed the “Four Olds” (old customs, old culture, old habits, and old ideas), burning books and art, ransacking museums and temples, and renaming streets with the names of communist revolutionary figures.

Comparing the Black Lives Matter movement in America to the Cultural Revolution in China, Breitbart News’s Joel Pollak noted that: “The most striking similarity between the two movements is the ritual humiliation of individuals seen to represent ‘the system’. Mobs of demonstrators have marched up to police and demanded that they kneel with them, or to them. Some officers, in a bid to defuse tensions, have obliged.”

“Today, we are watching similarly cultish scenes of white citizens singling themselves out by race and confessing their sins of ‘privilege’, taking oaths of allegiance, on their knees, to the new movement,” Pollack added.