Brexit Party leader Nigel Farage has compared the New Iconoclasm of Black Lives Matter to the Taliban after the far-left group tore down the statue of a local historic figure who owned slaves.

On Sunday, Black Lives Matters activists tore down a statue in Bristol of seventeenth-century parliamentarian and philanthropist Edward Colston over his ties to slavery.

The mob ripped down the Victorian statue from its plinth, sprayed red paint over it, rolled it through the streets, before pushing it into the harbour, while police looked on.

Later, a Bristol police superintendent said that to leave the rioters to destroy the statue was a “tactical decision” because to intervene and prevent the crime may have caused “further disorder”. He added they did not want any “tension”, claiming that “the right thing to do was just to allow it to happen”.

In response, Nigel Farage said on Sunday: “A new form of the Taliban was born in the UK today. Unless we get moral leadership quickly, our cities won’t be worth living in.” 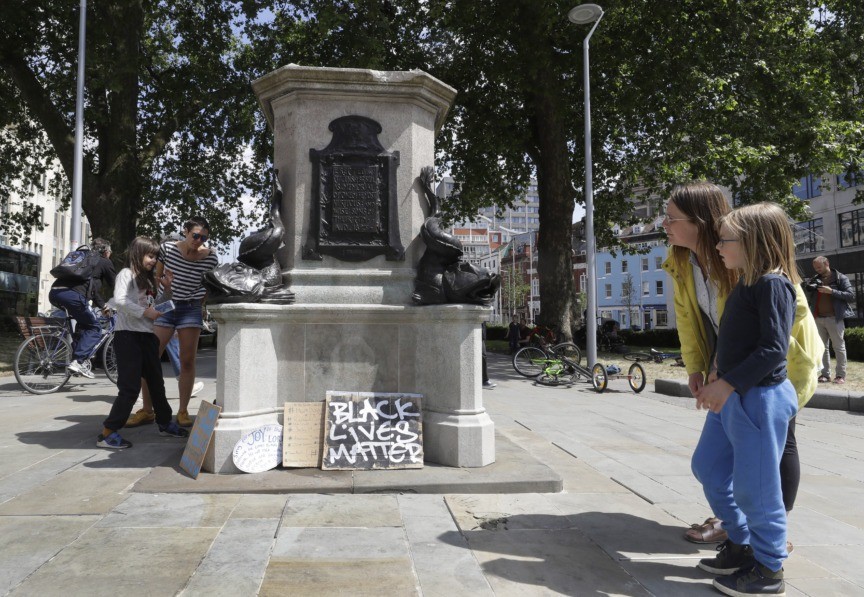 People look at the pedestal of the toppled statue of Edward Colston in Bristol, England, Monday, June 8, 2020, following the downing of the statue on Sunday at a Black Lives Matter demo. The toppling of the statue was greeted with joyous scenes, recognition of the fact that he was a notorious slave trader — a badge of shame in what is one of Britain’s most liberal cities. (AP Photo/Kirsty Wigglesworth)

A new form of the Taliban was born in the UK today. Unless we get moral leadership quickly our cities won't be worth living in.

When the Taliban took over Afghanistan in 1996, it imposed a strict, Islamic fundamentalist culture across the country, including wiping out any traces of pre-Islamic history including the destruction of the world’s tallest-standing Buddhas. Islamic State likewise in their imposition of sharia law smashed statues in Palmyra, Syria —  a site of global historical importance — in 2015 and 2017.

Senior Eurocrat and former Prime Minister of Belgium Guy Verhofstadt celebrated the removal of the statue, saying it was the duty of Europeans to look at their history and atone for their collective sins.

In his time, Colston was regarded for his “example of Christian liberality”, using his wealth to found schools, hospitals, and almshouses for the poor. The historic figure is today discussed near-exclusively in reference to the fact that he made money out of the slave trade.

To build a future of equal rights & justice, it is necessary for Europeans to look at their past and practices of exploitation & mass murder. Glad that no one is asking for #Colston to be put back. #BlackLivesMatter pic.twitter.com/CM4R2xKEMz

Colston’s statue was not the only monument to be attacked by far-leftists over the weekend.

As the country marked the 76th anniversary of D-Day — the beach landings that marked the beginning of the assault to free Europe from the Nazis — on Saturday, Black Lives Matter protesters vandalised the Cenotaph war memorial on Whitehall in London. On Sunday, an activist tried to burn the flags adorning the monument.

BLM vandals also attacked the statue of wartime prime minister Winston Churchill — who fought Nazis and Fascists — in Parliament Square on the D-Day anniversary and a second time on Sunday, scrawling “racist” across his plinth.

The Parliament Square statues of assassinated American Republican President Abraham Lincoln, who won the Civil War that resulted in the freeing of black slaves, and Indian independence and anti-colonialist campaigner Mahatma Gandhi were also vandalised over the weekend.

The ‘de-platforming’ of Colston may embolden further acts of iconoclasm, the destruction of icons for the political or religious purpose most notably associated in the UK with the Protestant Reformation during the sixteenth century.

Speaking to the liberal-progressive Guardian on Monday, members of the Rhodes Must Fall movement have said they will restart their campaign to have a statue of “racist” Cecil Rhodes removed four years after officials from Oriel College, Oxford, said it would stay.

“What happened in Bristol is the catalyst for this protest,” Femi Nylander, an organiser for Rhodes Must Fall, told the newspaper.

“We’re seeing a global surge against anti-blackness which has allowed us to rejuvenate that debate. It’s what we saw with Colston – it was Black Lives Matter who took down that statue of a slave owner. We’re reaffirming our demands to Oxford that they should themselves take this down as a matter of principle and matter of urgency,” Mr Nylander said, with a protest set to take place outside in front of the statue on Tuesday.

Nelson could also be at risk, again. In 2017, as Guardian columnist Afua Hirsch suggested the removal of the famous statue of Viscount Horatio Nelson, the British naval officer who led the fleet in the Battle of Trafalgar that pushed back the imperial ambitions of French tyrant Napolean Bonaparte.