Safiyya Amira Shaikh, 37, who professed support for Islamic State, was sentenced at the Old Bailey on Friday to life imprisonment with a minimum incarceration term of 14 years.

Born Michelle Ramsden, the single mother from Hayes was seen leaving court in a black hijab, smiling at the press while raising her finger in a salute associated with the Islamic State terror group, according to Sky News.

The convicted terrorist, who had converted to Islam in 2007, had plotted to bomb St Paul’s Cathedral on Easter. She had also planned to bomb a nearby hotel and then blow herself up on the London underground in a suicide attack.

A habitual drug-user, she was known to authorities, having been cautioned for theft and given a community order for burglary in 2013, then was arrested in 2015 for heroin possession.

Shaikh had come up on MI5’s radar after she had been examined by the government’s antiextremism programme Prevent three times between August 2016 and September 2017. The British domestic intelligence agency then placed her on a watch list with 3,000 other active or potential terrorists.

Evidence shown to the court revealed that Ms Shaikh had been in contact with the members of the British proscribed terror group Al Muhajiroun, headed by the infamous Islamist radical preacher, Anjem Choudary. She had also been sent extremist content by her contacts and sought it out on YouTube. 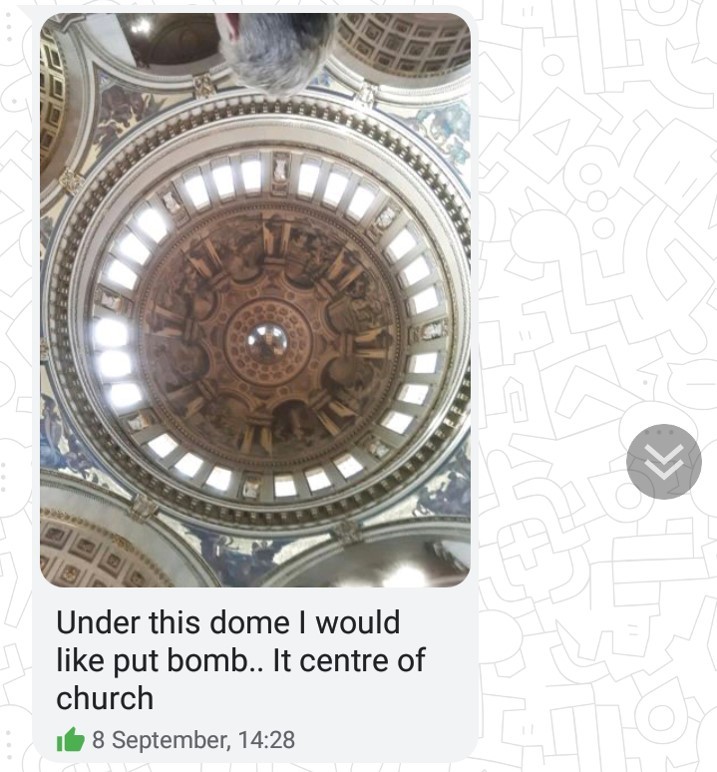 She was not just a passive consumer of extremist culture but was the administrator for a jihadist Telegram chat channel “GreenB1rds” where Muslim extremists discussed committing acts of terror in the name of Islamic State. Scotland Yard described how she had shared on the channel videos of ISIS terrorists executing people and “horrific terrorist propaganda posters and videos, some of which she created herself”. The judge even said that her posts might have influenced terror attacks around the world.

Her terror plans were foiled when she started to discuss her jihadist endeavours with who she thought were fellow Islamic State supporters, but were undercover officers part of a joint Metropolitan Police and MI5 operation.

The sting saw two undercover officers pretend to prepare to help the woman build bombs which she wanted to plant under the dome of the seventeenth-century Anglican cathedral in London.

Assessing whether the female jihadist was sincere about her endeavours, one undercover officer said: “…if you don’t want to do jihad that’s ok.”

The court heard that Ms Shaikh was insistent in committing deadly acts of terror, responding: “No brother I want so much. I want to kill a lot. I would like to do church, somewhere historical.

“Put bomb with detonator then shoot ’til killed — what I always wanted. A day like Christmas or Easter good, kill more.

“I always send threats. But I want [to] make threats real.”

On September 8th, 2019, Shaikh was caught undertaking a “hostile reconnaissance mission”, walking into St Paul’s Cathedral in a burqa to scope out the location, taking pictures of underneath the dome which she sent to the undercover officer via WhatsApp, indicating that that was where she wanted to set off a bomb.

On September 22nd, she met with another undercover officer, disguised as the wife of Shaikh’s coconspirator, and handed over two pink bags which she thought would be filled with explosives and returned to her. On October 10th, she was arrested.

Ms Shaikh’s defence team claimed that their client had experienced “doubts” over committing the act of terror. However, the 37-year-old had said in a telephone conversation with a friend last week while in jail, which she knew would have been recorded: “I didn’t get cold feet yeah… I was ready to go through with it… I wasn’t having doubts.”