Thousands of protesters descended on the British capital on Saturday to call for an end to coronavirus lockdowns and restrictions on businesses in the UK, which they described as a form of “tyranny”.

In a Breitbart London exclusive video, protesters were seen singing: “I would rather be a human than a slave”, “We are the 99 per cent”, and “You can shove your New World Order up your ass”.

The ‘Stop the New Normal’ march was organised by the anti-lockdown activist group Stand Up X and was one of the largest rallies against the government’s coronavirus restrictions since the beginning of the lockdowns in March.

The large scale act of civil disobedience followed more restrictions being imposed on the people of Wales, Northern Ireland, and Scotland, as well as the introduction of a ‘tier system’ by Prime Minister Boris in England, in which local regions and cities are placed under lockdown if spikes in coronavirus cases are recorded.

At around 4 pm the police in London began using tactics to split the protest into separate groups and made at least 18 arrests in Trafalgar Square and on Westminster Bridge.

One woman told Breitbart London: “I’m so angry, all these police that are storming in, they’re going to lose their pensions. They’re supposed to be protecting us, they’re not, this is tyranny.”

“I cannot believe in this day and age, in this time now, more than ever we need to stand together, and if people can’t get together and get united for the cause, for their freedom, for everybody, then we’ve lost already,” she said.

“I don’t understand, if your children are not the motivation to fight for your freedom… my grandfather and my grandad did not fight in the First World War and the Second World War as snipers to not be under a fucking dictatorship, for it to happen now in 2020,” she added, going on to urge the rest of the country to “wake up”.

The lead officer for the Metropolitan Police’s response to the protest, Commander Ade Adelekan explained his decision to disperse the crowds: “Throughout the day, officers have been managing a number of complex protests at various locations across central London.”

“One demonstration, in particular, attracted a large number of protesters and I became increasingly concerned that those in the crowd were not maintaining social distancing or adhering to the terms of their own risk assessment,” he said.

“Organisers did not take reasonable steps to keep protesters safe which then voided their risk assessment. At this point, officers then took action to disperse crowds in the interests of public safety,” Adelekan added.

In footage shared online, police were again seen physically confronting the anti-lockdown protesters, with one man wearing a ‘Make Britain Great Again’ hat being thrown to the pavement.

In contrast, the police took a hands-off approach to a large-scale protest against police brutality in Nigeria, that was led by Black Lives Matter activist and self-described Black Panther, Sasha Johnson. 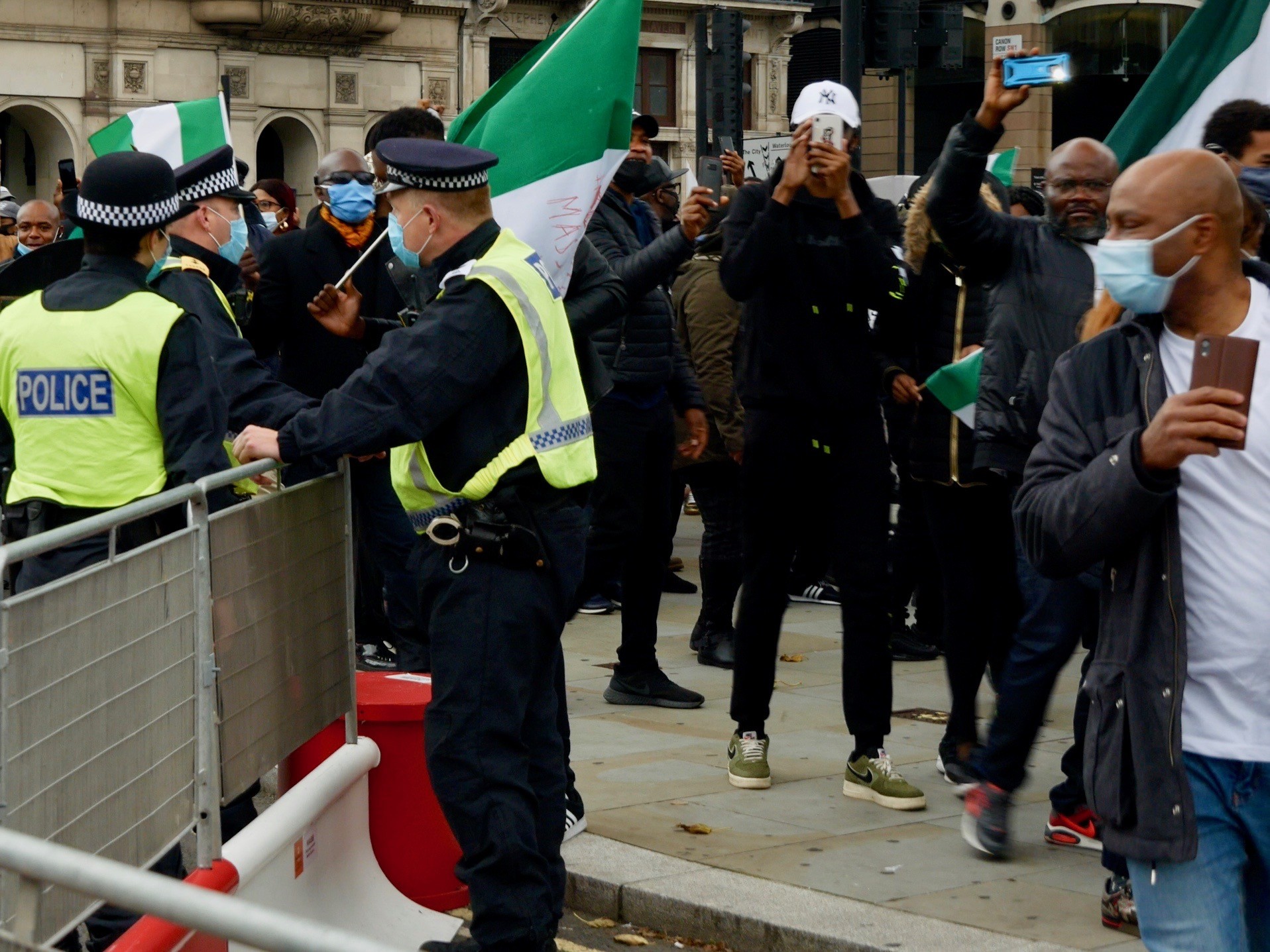 Hundreds of protesters against police brutality in Nigeria took to the streets of London on October 24, 2020. Kurt Zindulka, Breitbart News 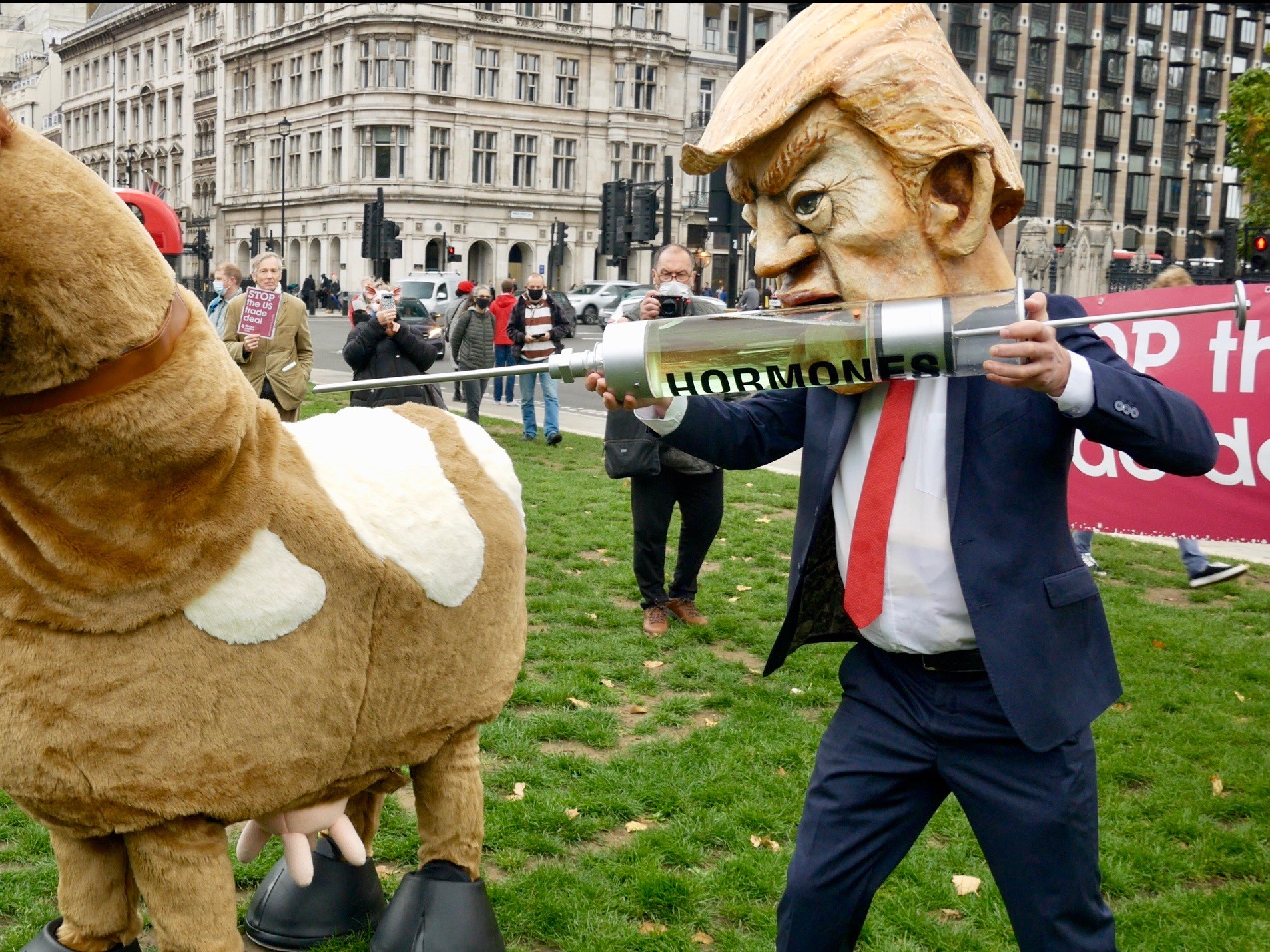 At a ‘Stop Trump Coalition’ Protest in London on October 24, 2020, a man dressed as President Trump is seen ‘injecting’ a pantomime cow with growth hormones. Kurt Zindulka, Breitbart News

Another protest organised by the Stop Trump Coalition — which saw around 50 people gather in Parliament Square to protest against the American leader as well as the prospect of a trade deal between the UK and the United States — was not broken up by the police either.