(AFP) — Five judges at Scotland’s highest court of criminal appeal on Friday upheld the conviction of the only man found guilty of the 1988 Lockerbie bombing after a posthumous legal challenge.

The family of former Libyan intelligence officer Abdelbaset Ali Mohmet al-Megrahi, which brought the case, said they were “heartbroken” at the decision, their lawyer Aamer Anwar said.

They will apply to appeal to the UK Supreme Court within 14 days, he added.

The ruling at the High Court of Justiciary in Edinburgh comes just over 32 years after what remains Britain’s worst terrorist attack, with long-held doubts about Megrahi’s involvement.

Megrahi spent seven years in a Scottish prison after his conviction in 2001 for the mass murder of 270 people, when Pan Am Flight 103 blew up over the Scottish town on December 21, 1988.

The Libyan regime of Moamer Kadhafi officially acknowledged responsibility in 2003, and paid $2.7 billion in compensation to families of the victims.

Megrahi was released and returned to Libya in 2009 after being diagnosed with terminal cancer. He died in 2012, protesting his innocence.

An initial appeal against his conviction and sentence was rejected, while a second was abandoned after his diagnosis.

TODAY IN HISTORY: 30 years ago today, 270 people were killed when a terrorist bomb exploded aboard a Pan Am Boeing 747 over Lockerbie, Scotland.

The majority of those on board the plane, which was bound for New York, were American. https://t.co/AdqduLSXYO pic.twitter.com/PjYK0KO8Lv 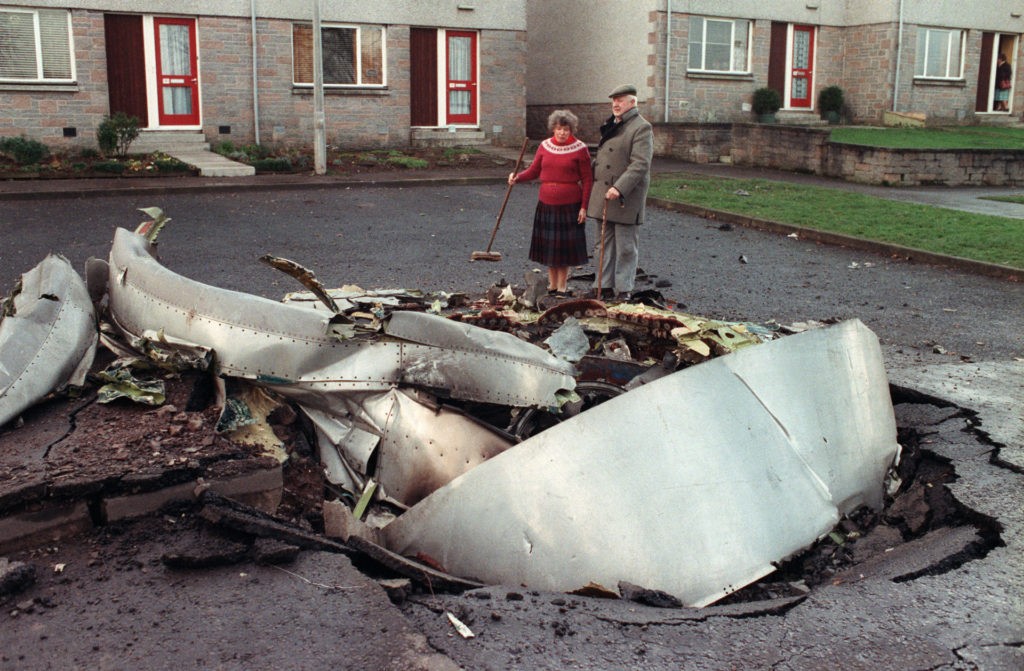 Local resident Robert Love stands by one of the four engines of the ill-fated Pan Am 747 Jumbo jet, 22 December 1988, that exploded and crashed 21 December on the route to New-York, with 259 passengers on board. All 243 passengers and 16 crew members were killed as well as 11 Lockerbie residents. In 2003, Libya admitted responsibility for the deaths of the 270 victims of the Pan Am 103 bombing. (Photo credit should read ROY LETKEY/AFP via Getty Images)

Anwar said Megrahi’s son Ali and the family would still fight to quash the conviction.

“I spoke to Ali Megrahi, the younger son of the late al-Megrahi, this morning and he was left devastated and heartbroken,” he told reporters.

“He is determined to fulfill the promise he made to his father before he died and as a result the family has instructed our legal team this morning to pursue an appeal to the UK Supreme Court in London,” he added.

The family wants the British authorities to declassify documents that are said to allege that Iran used a Syria-based Palestinian proxy to build the bomb that downed the Boeing 747.

The documents are thought to allege a Jordanian intelligence agent within the Popular Front for the Liberation of Palestine-General Command (PFLP-GC) built the bomb.

The PFLP-GC has been designated a terrorist group by several countries, including Britain and the United States.

The Lockerbie bombing is alleged to have been carried out in retaliation for the downing of an Iranian passenger jet by a US Navy missile in July 1988 that killed 290 people.

Services are to be held in Scotland and the US to remember the victims of the Lockerbie bombing 30 years on. https://t.co/WDlFQtNwny pic.twitter.com/zLYRGJY23m 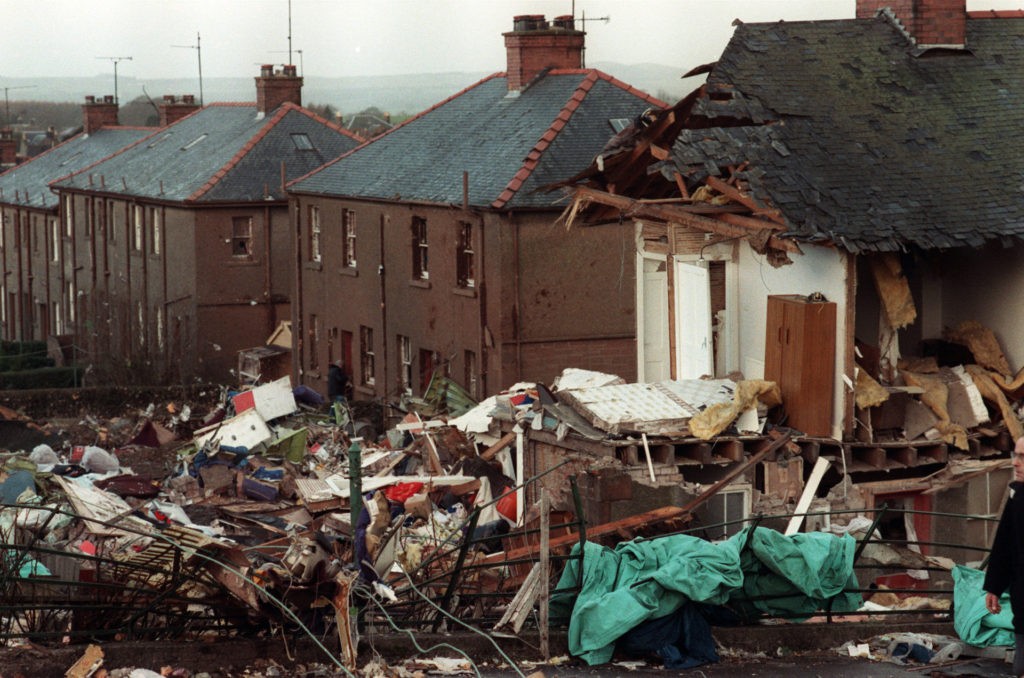 (FILES) View taken on December 22, 1988 of the scene of devastation caused by the explosion of a 747 Pan Am Jumbo jet over Lockerbie, that crashed December 21 on the route to New-York, with 259 passengers on board. All 243 passengers and 16 crew members were killed as well as 11 Lockerbie residents. In 2003, Libya admitted responsibility for the deaths of the 270 victims of the Pan Am 103 bombing AFP PHOTO / ROY LETKEY (Photo credit should read ROY LETKEY/AFP via Getty Images)

The case came back to court in November last year after an independent criminal case review body said a possible miscarriage of justice may have occurred on the grounds of “unreasonable verdict” and non-disclosure of evidence.

But the judges rejected both grounds of appeal.

“The appeal against conviction is refused,” they said in a 64-page ruling.

Central to his family’s case was the testimony of Tony Gauci, a Maltese shopkeeper, who identified Megrahi as the man who bought clothes found in the suitcase that contained the bomb.

Lawyers argued his eye-witness evidence should have been discounted and was “highly prejudicial” because he had earlier seen a photograph of Megrahi as a suspect in a newspaper.

They said Gauci was motivated by reward money, that there was no proof Megrahi bought the clothing, and that dates of his supposed visit to Malta did not fit the timeline.

The suitcase was loaded onto a plane from Malta to Germany, then transferred to the ill-fated flight that left London Heathrow bound for New York.

The government’s case was that Megrahi used a false passport to travel to the Mediterranean island, and that Gauci did not receive any remuneration.

Crown lawyers said the three judges who tried and convicted Megrahi were entitled to infer he was involved, and the fake document was part of a “significant chapter of evidence” supporting that.

Libyans wave Saltire as ‘hero’ Megrahi returns : The Lockerbie bomber was given a hero’s welcome in Libya last n.. http://bit.ly/geadF 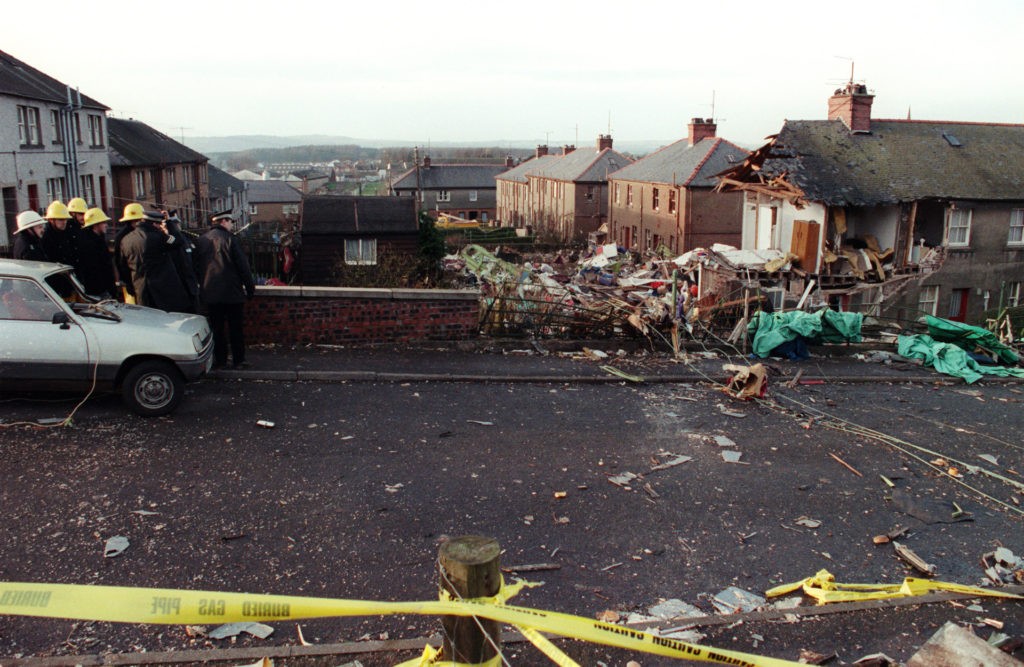 Policemen and firemen look at the scene of devastation in Lockerbie, 22 December 1988, after a 747 Pan Am Jumbo jet exploded and crashed over the town 21 December on the route to New-York, with 259 passengers on board. All 243 passengers and 16 crew members were killed as well as 11 Lockerbie residents. In 2003, Libya admitted responsibility for the deaths of the 270 victims of the Pan Am 103 bombing. (Photo by ROY LETKEY / AFP) (Photo credit should read ROY LETKEY/AFP via Getty Images)

On the 32nd anniversary of the Lockerbie bombing in December, the US Justice Department announced a new indictment against another former member of Kadhafi’s intelligence services.

It alleges that Abu Agila Mohammad Masud assembled and programmed the bomb.

The investigation was relaunched in 2016 when Washington learned of his arrest after Kadhafi’s ouster and death in 2011, and his reported confession of involvement to the new Libyan regime in 2012.

Investigators also relied on his travel records, including a flight from the Libyan capital Tripoli to Malta.

Masud is currently being held in Libya for his alleged involvement in a 1986 attack on a Berlin nightclub that killed two US soldiers and a Turkish citizen.

Tripoli in 2004 also agreed to compensate the families of the victims of that attack.

The U.S. unsealed criminal charges against a third alleged conspirator in the 1988 bombing of Pan Am Flight 103 over Lockerbie, Scotland, that killed 270 people, mostly Americans https://t.co/Ymgagz4v59 pic.twitter.com/EvSxdS61hA 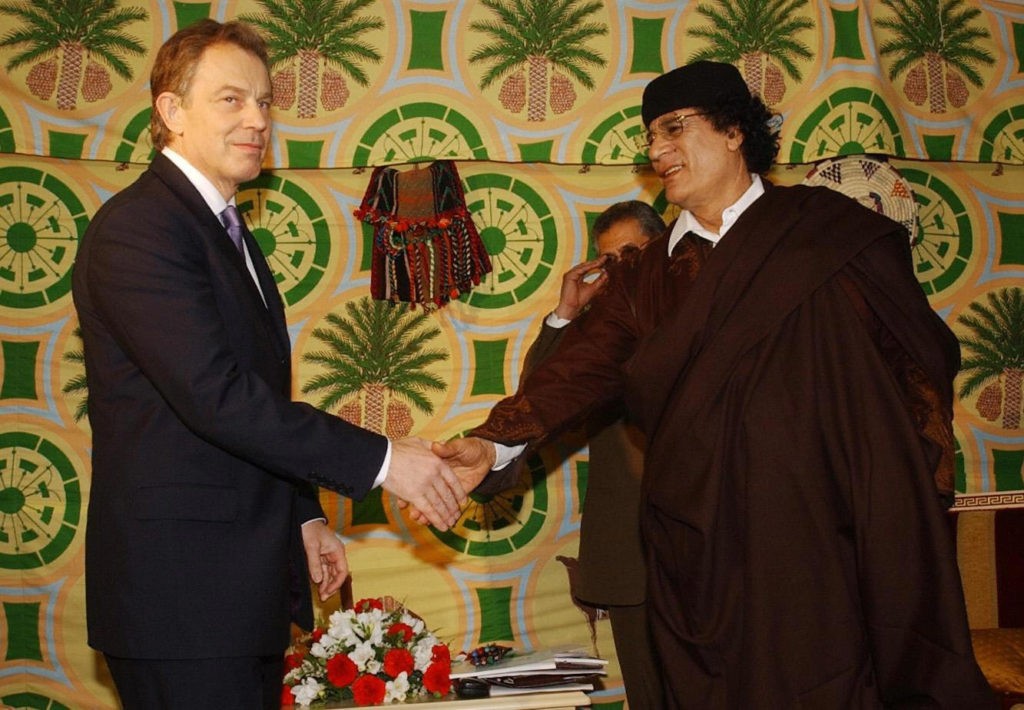 TRIPOLI, LIBYAN ARAB JAMAHIRIYA: British Prime Minister Tony Blair (L) shakes hands with Libyan leader Colonel Moamer Kadhafi 25 March 2004 at the start of their meeting in a tent on the outskirts of Tripoli. Blair arrived for landmark talks with Kadhafi amid warming ties between Tripoli and the West, as their countries prepared to sign a gas contract. On the first visit to Libya by a British premier since the country gained independence in 1951, Blair has pledged to offer a “hand in partnership” to Libya following its decision to renounce weapons of mass destruction. AFP PHOTO/POOL/STEFAN ROUSSEAU (Photo credit should read STEFAN ROUSSEAU/AFP via Getty Images)