Public opinion of Prince Harry and his wife Meghan Markle in Britain has fallen to the worst it has ever been, following their tell-all interview with Oprah Winfrey.

A YouGov poll released on Friday revealed that the couple has fallen heavily out of favor with the British public, according to a report by Reuters.

The poll found that 48 percent of the respondents had a negative opinion of Prince Harry, compared to 45 percent who had a positive view. This brings Harry’s net favorability rating had been negative for the first time ever, giving him a net score of -3.

The report added that Meghan’s scores have also fallen significantly, as only three in ten people said that they had a positive view of her, while 58 percent had a negative opinion.

Meanwhile, a separate poll — with part of it having been conducted before the interview was broadcast in Britain — found that support for the monarchy as a whole has largely remained unchanged. 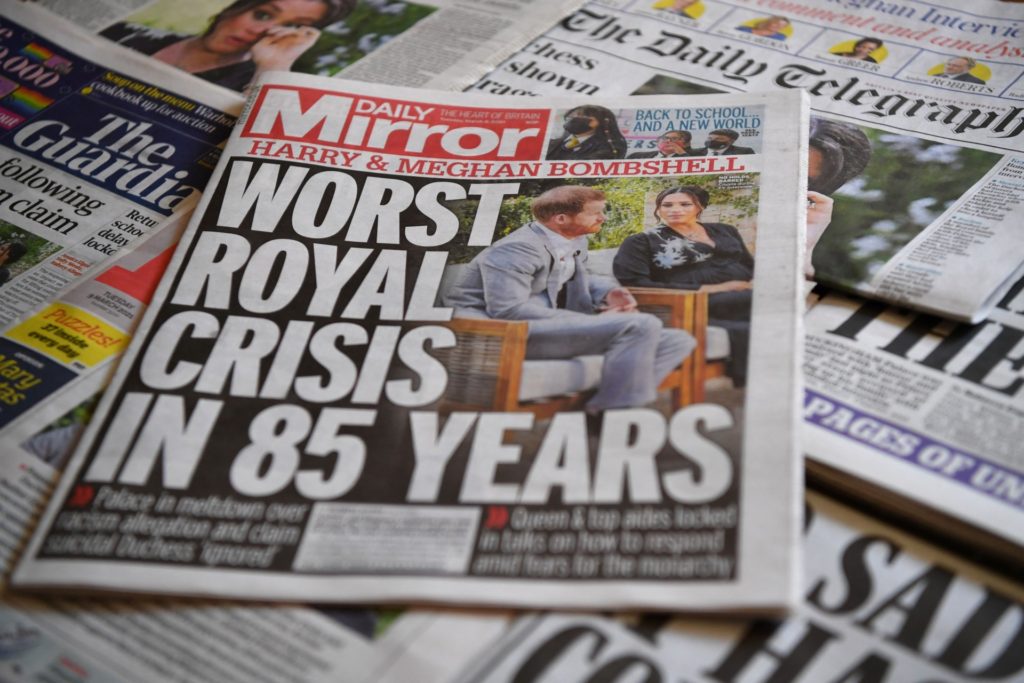 An arrangement of UK daily newspapers photographed as an illustration shows front page headlines reporting on the story of the interview given by Meghan, Duchess of Sussex, wife of Britain’s Prince Harry, Duke of Sussex, to Oprah Winfrey, which aired on UK broadcaster ITV. (BEN STANSALL/AFP via Getty Images)

During the couple’s interview with Oprah Winfrey, Meghan expressed frustration that her son Archie was not given the royal title of prince, and went on to imply that this could have something to do with racism.

“In the months when I was pregnant, all around this same time, so we have in tandem the conversation of he won’t be given security, he’s not going to be given a title, and also concerns and conversations about how dark his skin might be when he’s born,” Meghan told Winfrey.

Meghan later clarified that these “conversations” were with Harry, not herself.

Both Harry and Meghan had also refused to name which family member allegedly expressed “concerns” surrounding their son’s skin color. Winfrey later said that she had been told off-camera by Harry that the person in question was not the Queen or her husband, Prince Phillip.

In response to these allegations, the Royal Family has taken the unusual step of issuing a statement.

“The issues raised, particularly that of race, are concerning. While some recollections may vary, they are taken very seriously and will be addressed by the family privately,” Buckingham Palace’s statement reads.