A young architect has proposed a traditional work of commemoration for the Duke of Edinburgh, days after members of the public and politicians voiced their support for a permanent memorial to the longest-serving Royal consort in British history.

Downing Street, Members of Parliament including the Labour leader of the opposition, and Tory backbenchers said they would back a London statue of the Duke of Edinburgh at the weekend, as the United Kingdom and Commonwealth Realms entered a period of mourning for Prince Philip, who died on Friday aged 99.

While the Duke would have enjoyed automatic public prominence thanks to his marriage to Princess Elizabeth, now Queen Elizabeth II, tributes to Prince Philip have noted his extensive personal service to the country, first as a front line Royal Navy officer in the Second World War and latterly, as a working Royal, as the patron of hundreds of charities. The Duke was also a prominent supporter of young people, British sports, and wrote over a dozen books.

Now a young architect, Conor Lynch, has created a proposal for a traditional-style permanent memorial to the Duke. Shown wearing the coronation robes and Royal Navy court dress he wore the day his wife was crowned Queen, Prince Philip is seen standing comfortably with his hand on the hilt of his sword and wearing the solid gold collar of the Order of the Garter over his shoulders after the manner of a painting of the Duke held by the Parliamentary Art Collection in London. In the design, the Duke stands on a stone plinth emblazoned with his personal coat of arms. 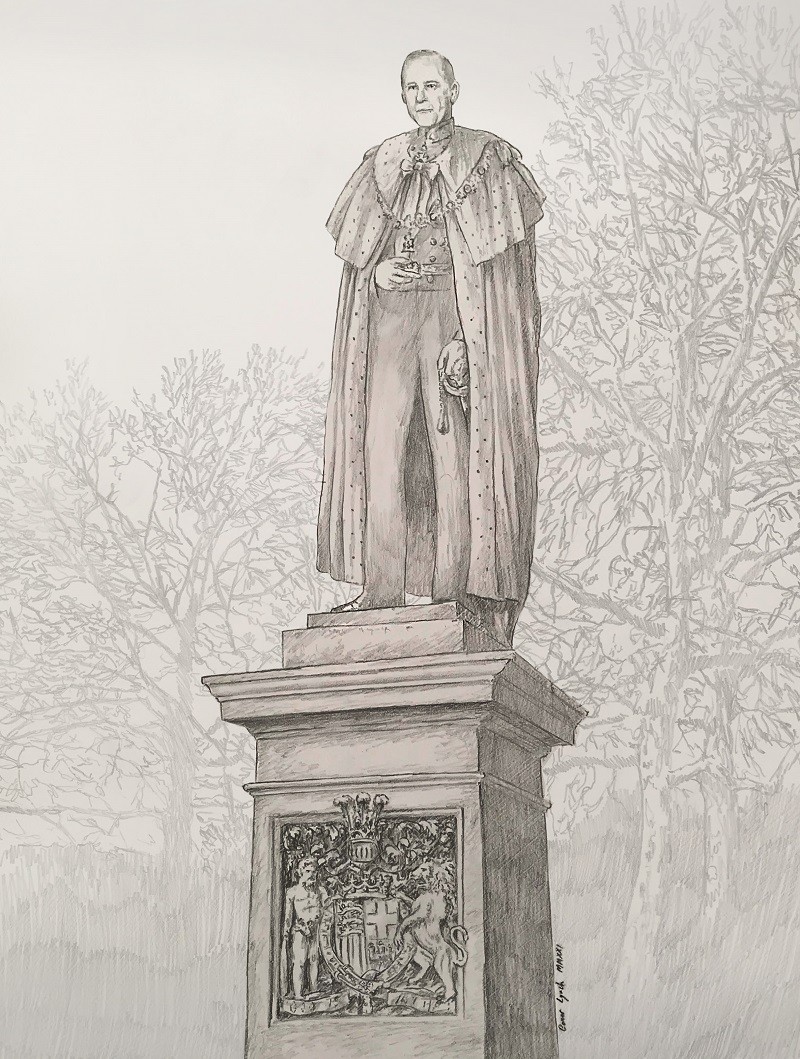 As reported by the Telegraph, a possible statue has broad backing, including “likely” support from the Prime Minister and the political machine at Downing Street. The paper also cites Labour leader Sir Keir Starmer — once, at least, an avowed republican in favour of disestablishing the monarchy — as being in favour, citing a Labour source who said a statue would be “a fitting tribute for his years of service.”

Also named in the newspaper report was a clutch of Conservative Members of Parliament including the Sir John Hayes, the chairman of the parliamentary Common Sense group, senior backbencher Sir Charles Walker, and James Sunderland MP. There is also a public petition of support for the idea which has received thousands of signatures.

The classical aspect of the proposed design stands at odds, somewhat, with the near-automatic assumption in the present day in the Western World that new works of public art and architecture will be fundamentally modernist in character. This was seen particularly obviously with the Paris Notre Dame fire of 2019, when talk of a modernist rebuild started before the embers had even died down.

After over a year of discussion and debate in France, including a bill being shuttled back and forth between two houses of Parliament, the battle between the “concrete lobby and iron lovers” and the supporters of the National Commission for Heritage and Architecture supporters came to a head, with President Macron’s modernist rebuild preference defeated.

A basic, and probably reasonable assumption among the general public that statutes commemorating public figures should resemble the people they are memorialising can sometimes be upset by abstract urges by commissioning bodies and artists keen to make their mark, too. This was evident recently with the unveiling of a memorial to the “mother of feminism”, Mary Wollstonecraft, in 2020.

Described by the BBC as a “swirling mingle” topped by a small statue of a naked woman, the chairwoman who commissioned the work said it was intended to go “beyond the Victorian traditions of putting people on pedestals”. Instead, the work was widely panned as being unrepresentative, needlessly edgy, and “disrespectful”.