Rioting has rocked Pakistan for the last week since the leader of the now-banned Tehreek-e-Labbaik Pakistan (TLP) was detained in the second biggest city Lahore after calling for the expulsion of the French ambassador.

The protests have paralysed cities and led to the deaths of six policemen, prompting the French embassy to recommend all its nationals temporarily leave the country.

Firdous Ashiq Awan, a spokeswoman for the Punjab provincial government, said 12 policemen had been abducted and taken to a TLP mosque in Lahore, where hundreds of supporters were gathered.

“Violent groups armed with petrol bombs and acid bottles stormed the Nawankot police station this morning,” she tweeted, adding that six police officers have now died in clashes this week.

A video circulating online — the authenticity of which has been confirmed to AFP by Lahore city police — shows a senior police officer with a blood-stained bandage wrapped around his head being held at the mosque.

The deputy superintendent, the third most senior officer from the raided station, speaks to the camera with an expressionless face.

The camera then swings round to show wounded TLP supporters gathered on the floor.

The TLP has been behind an anti-France campaign for months since President Emmanuel Macron defended the right of Charlie Hebdo magazine to republish cartoons depicting the Prophet Muhammad — an act deemed blasphemous by many Muslims.

TLP leaders say several of the party’s supporters were killed in Sunday’s clashes.

“We won’t bury them until the French ambassador is kicked out,” Allama Muhammad S

Shafiq Amini, a TLP leader in the city, said in a video statement. The party has given the government an April 20 deadline to act.

Muhammad Shabir, an injured TLP protester, said supporters had been staging a peaceful sit-in when they were attacked by police.

“They fired directly at us and threw acidic water. Some men had their chest burned, others their back, face or whole body,” he told AFP.

“The government of Pakistan has done a big injustice to us.”

The police said they had not attempted a clearance operation and had acted in self-defence. They would not comment on the reported TLP deaths.

An oil truck was seized and petrol bombs thrown at officers, both Arif and Awan said.

Pakistan’s Interior Minister Sheikh Rashid Ahmed said TLP supporters had blocked 191 sites over the past week, with the mosque in Lahore now a gathering point.

“No negotiations are taking place, tried for two-three months but they are not ready to backtrack from their agenda and the government has no other choice but to establish its writ,” he said at a press conference.

Prime Minister Imran Khan’s government has struggled to bring TLP to heel over the years, but this week announced an outright ban against the group — effectively labelling it a terrorist outfit.

Still, on Saturday he suggested the party hadn’t been banned for its ideology, but rather its methods.

“Let me make clear to people here & abroad: Our govt only took action against TLP under our anti-terrorist law when they challenged the writ of the state and used street violence & attacking the public & law enforcers,” he tweeted.

Khan said insulting the prophet hurt Muslims around the world.

“We cannot tolerate any such disrespect & abuse,” he added.

Blasphemy is a sensitive issue in conservative Pakistan, where laws allow for the death penalty to be used on anyone deemed to have insulted Islam or Islamic figures.

The French embassy’s call for its nationals to leave Pakistan appears to have gone largely unheeded so far. 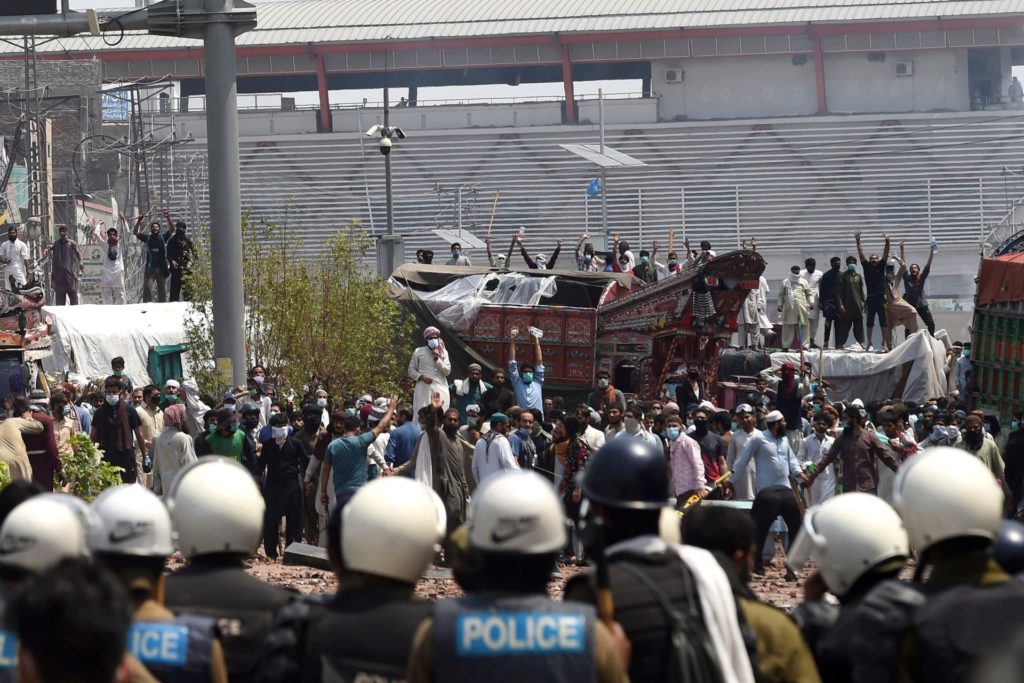 Supporters of Tehreek-e-Labbaik Pakistan (TLP) party gather as they block a street during a protest after their leader was detained following his calls for the expulsion of the French ambassador, in Lahore on April 18, 2021. (Photo by Arif ALI / AFP) (Photo by ARIF ALI/AFP via Getty Images)