Prince Harry, husband of Meghan, Duchess of Sussex, has lamented the “genetic pain” of his upbringing and compared royal life to being a zoo animal.

Speaking on the ‘Armchair Experts’ podcast hosted by Dax Shepard — who described Harry as “a rad dude” — the British royal kicked off the interview by telling off comedian and mixed martial arts colour commentator Joe Rogan for recent comments questioning the value of coronavirus vaccines for healthy young people, then lurched into a brief discussion of the way online algorithms create an “echo chamber of no pushback.”

He went on to suggest that the people responsible for such algorithms are “all male and all white” before coming onto the topic of himself and his mental health.

Harry suggested that his decision to share his “story” came from “a place of courage,” and complained that “some quarters” of the media appeared to think he could not be suffering because he is “privileged.”

He explained that “a lot of genetic pain and suffering [got] passed on” to him by his father, Prince Charles, and appeared to indicate that he had in turn been badly parented by the Queen and her recently deceased husband, Prince Philip.

“[S]uddenly I started to piece it together and go ‘OK, so this is where he went to school, this is what happened, I know this about his life, I also know that is connected to his parents so that means he’s treated me the way he was treated, so how can I change that for my own kids’. And here I am, I moved my whole family to the US, that wasn’t the plan but sometimes you’ve got make decisions and put your family first and put your mental health first,” he said.

Majority of Britons Think Woke Royals Harry and Meghan Should Be Stripped of Titles https://t.co/uMXDn443XO

On royal life more specifically, Harry likened it to “a mixture between The Truman Show and being in a zoo” — referring to the 1998 film starring Jim Carrey as a man whose world revolves entirely around him as part of a reality television show he is not aware of.

“It’s the job right? Grin and bear it. Get on with it. I was in my early twenties and I was thinking I don’t want this job, I don’t want to be here. I don’t want to be doing this. Look what it did to my mum [Princess Diana], how am I ever going to settle down and have a wife and family when I know it’s going to happen again’?” he said.

“I’ve seen behind the curtain, I’ve seen the business model and seen how this whole thing works, and I don’t want to be part of this,” he said of his “angry” outlook prior to meeting wife Meghan, 39. 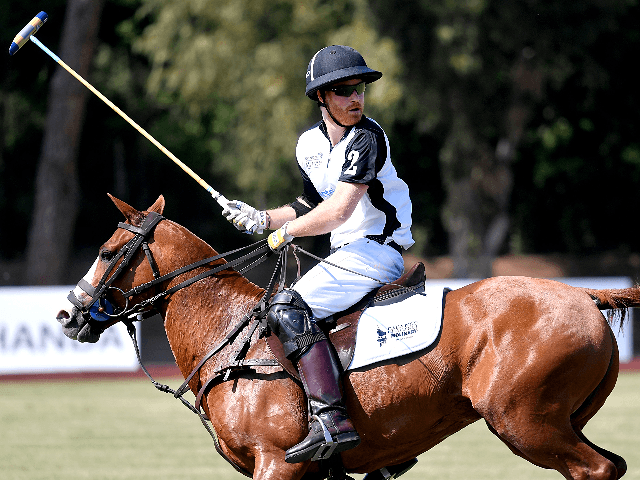 Prince Harry competing in a charity polo match at the Roma Polo Club, in Rome, Italy, on May 24, 2019. (TIZIANA FABI/AFP via Getty Images)

He also complained of the media “feeding frenzy” he experienced while living in Tyler Perry’s mansion and hinted that he did not appreciate the First Amendment, which protects freedom of speech and freedom of the press in America, saying: “I’ve got so much I want to say about the First Amendment; I still don’t understand it, but it is bonkers.”

Harry also raised the issue of so-called “unconscious bias,” suggesting that those who are made aware of it but choose not to tackle it are “heading towards racism.”