COLLEVILLE-SUR-MER, France (AP) – When the sun rises over Omaha Beach, revealing vast stretches of wet sand extending toward distant cliffs, one starts to grasp the immensity of the task faced by Allied soldiers on June 6, 1944, landing on the Nazi-occupied Normandy shore.

Several ceremonies were being held Sunday to commemorate the 77th anniversary of the D-Day assault that led to the liberation of France and western Europe from Nazi control, and honour those who fell.

“These are the men who enabled liberty to regain a foothold on the European continent, and who in the days and weeks that followed lifted the shackles of tyranny, hedgerow by Normandy hedgerow, mile by bloody mile,” Britain’s ambassador to France, Lord Edward Llewelyn, said at the inauguration of a new British monument to D-Day’s heroes.

On D-Day, more than 150,000 Allied troops landed on the beaches codenamed Omaha, Utah, Juno, Sword, and Gold, carried by 7,000 boats. This year on June 6, the beaches stood vast and nearly empty as the sun emerged, exactly 77 years since the dawn invasion.

The #RedArrows have performed a flypast to mark the unveiling of the new British Normandy Memorial in Ver-sur-Mer, #France. It records the names of the 22,442 service personnel under British command who fell on D-Day and during the Battle of #Normandy in 1944. @britishmemorial pic.twitter.com/tFvU1iZ1zS

For the second year in a row, anniversary commemorations are marked by virus travel restrictions that prevented veterans or families of fallen soldiers from the U.S., Britain, Canada, and other Allied countries from making the trip to France. Only a few officials were allowed exceptions.

At the British ceremony near the village of Ver-sur-Mer, bagpipes played memorial tunes and warplanes zipped overhead trailing red-white-and-blue smoke. Socially distanced participants stood in awe at the solemnity and serenity of the site, providing a spectacular and poignant view over Gold Beach and the English Channel. 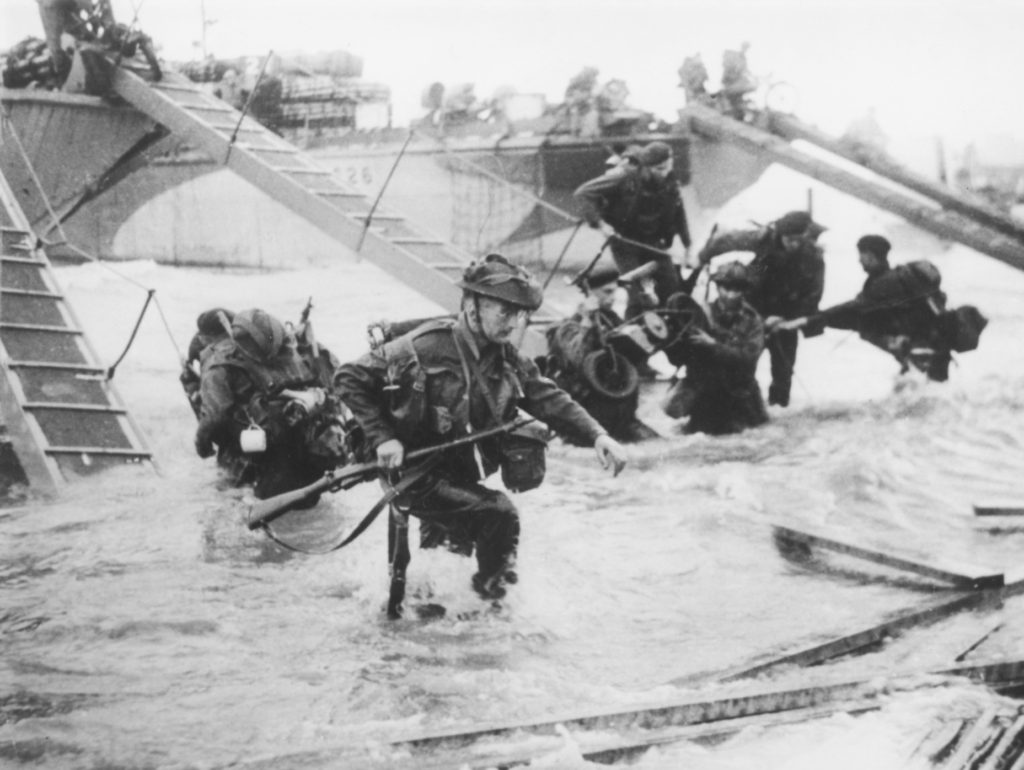 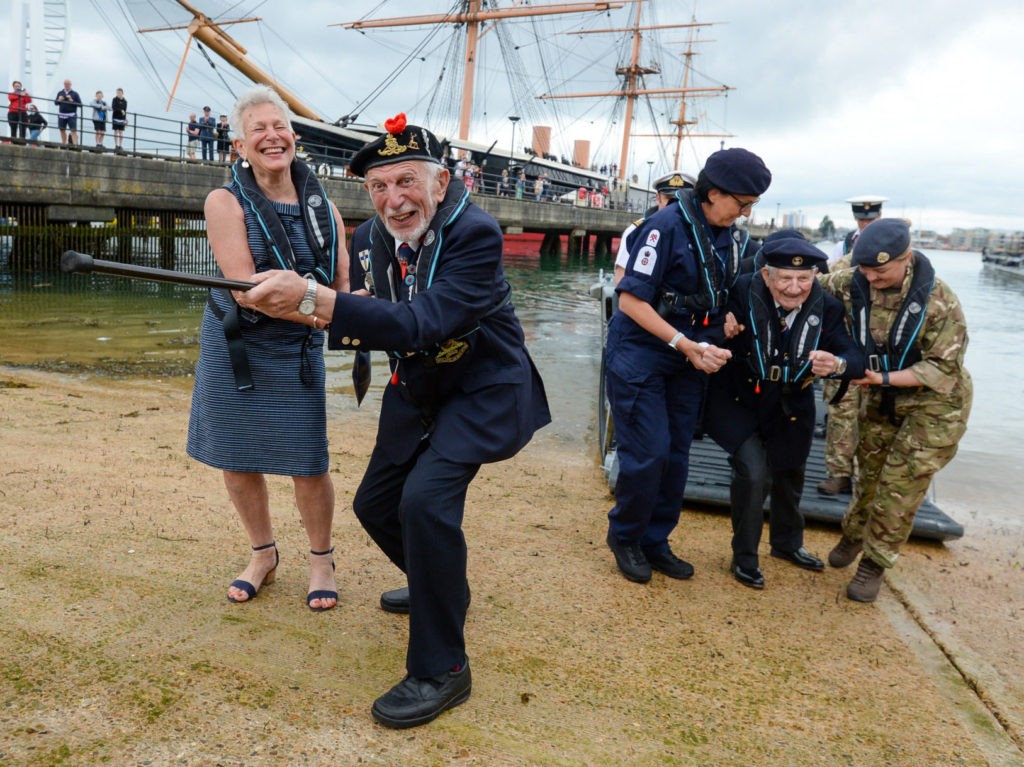 PORTSMOUTH, ENGLAND – JUNE 06: D-Day veteran Joe Cattini pretends to fire his gun after arriving by landing craft at Portsmouth Historic Dockyard on June 06, 2021 in Portsmouth, England. Portsmouth Historic Dockyard commemorated the 77th anniversary of the pivotal WWII operation with the visit of five D-Day veterans, convened by the charity D-Day Revisited. The veterans arrived at the site by landing craft and were greeted by pipers playing the “Millin Pipes” used by William Millin (Piper Bill) on D-Day itself. D-Day Revisited is best known for supporting anniversary visits of British military veterans to the beaches of Normandy, but with the Covid-19 pandemic still restricting international travel and large gatherings, most British D-Day veterans had to mark the occasion closer to home this year. (Photo by Finnbarr Webster/Getty Images)

The new monument pays tribute to those under British command who died on D-Day and during the Battle of Normandy. Visitors stood to salute the more than 22,000 men and women, mostly British soldiers, whose names are etched on its stone columns. Giant screens showed D-Day veterans gathered simultaneously at Britain’s National Memorial Arboretum to watch the Normandy event remotely. Prince Charles, speaking via video link, expressed regret that he couldn’t attend in person.

On June 6, 1944, “In the heart of the mist that enveloped the Normandy Coast … was a lightning bolt of freedom,” French Defense Minister Florence Parly told the ceremony. “France does not forget. France is forever grateful.”

Charles Shay, a Penobscot Native American who landed as an U.S. army medic in 1944 and now calls Normandy home, was the only surviving D-Day veteran at the Ver-sur-Mer ceremony. He was also expected to be the only veteran taking part in a commemoration at the American memorial cemetery later in the day. 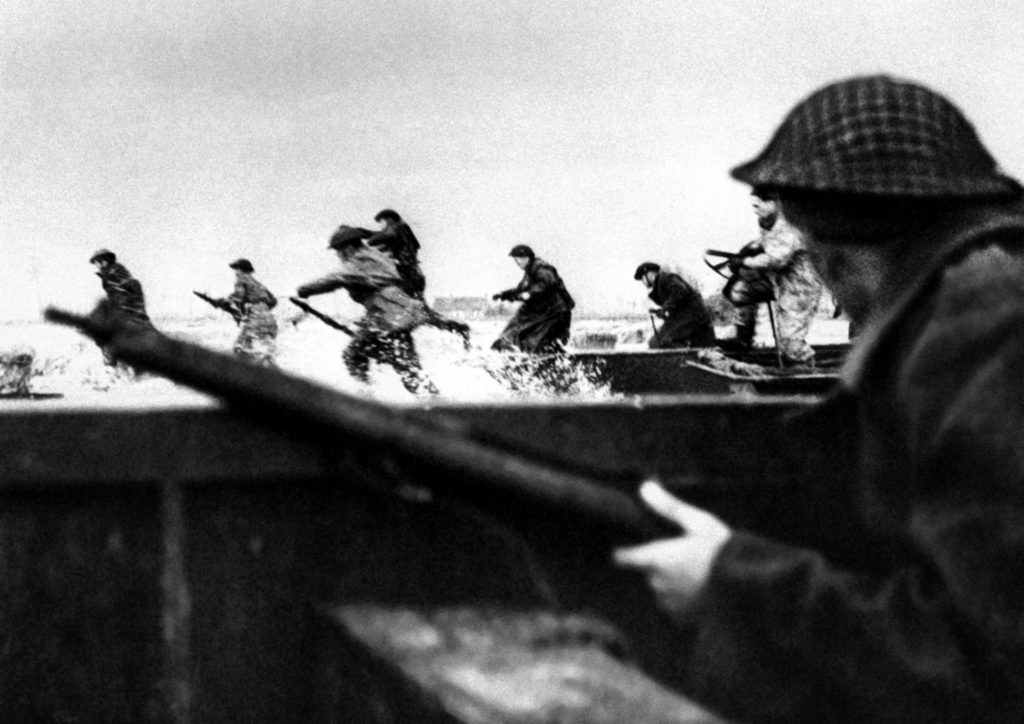 Canadian soldiers land on Courseulles beach in Normandy, 06 June 1944 as Allied forces storm the Normandy beaches on D-Day. D-Day, 06 June 1944 is still one of the world’s most gut-wrenching and consequential battles, as the Allied landing in Normandy led to the liberation of France which marked the turning point in the Western theatre of World War II. (Photo by -/AFP via Getty Images) 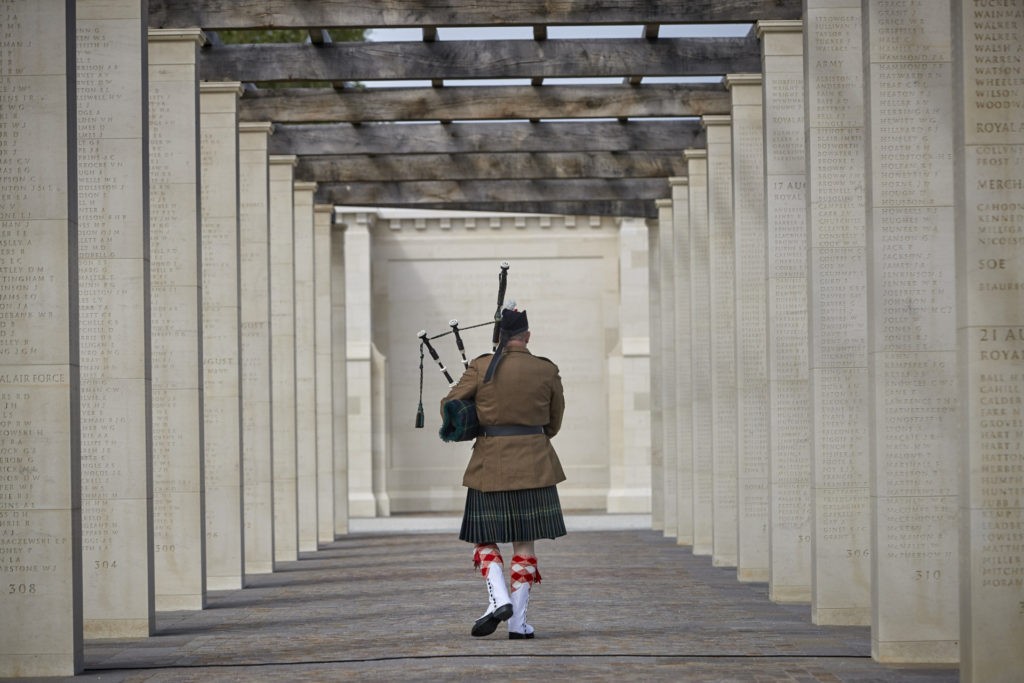 VER-SUR-MER, FRANCE – JUNE 06: Piper Jerome Levannier walks through The British Normandy Memorial during the official opening of the memorial on the 77th anniversary of D-Day on June 06, 2021 in Ver-sur-Mer Normandy, France. The British Normandy Memorial, officially opened today, is inscribed with the names of 22,442 men and women who lost their lives during the invasion of France in the summer of 1944 and is the first memorial in Normandy to commemorate those who fell under British Command. (Photo by Kiran Ridley/Getty Images for Normandy Memorial Trust)

Most public events have been cancelled, and the official ceremonies are limited to a small number of selected guests and dignitaries.

Denis van den Brink, a WWII expert working for the town of Carentan, site of a strategic battle near Utah Beach, acknowledged the “big loss, the big absence is all the veterans who couldn’t travel.”

“That really hurts us very much because they are all around 95, 100 years old, and we hope they’re going to last forever. But, you know…” he said.

“At least we remain in a certain spirit of commemoration, which is the most important,” he told The Associated Press.

Over the anniversary weekend, many local residents have come out to visit the monuments marking the key moments of the fight and show their gratitude to the soldiers. French World War II history enthusiasts, and a few travellers from neighbouring European countries, could also be seen in jeeps and military vehicles on the small roads of Normandy.

Some reenactors came to Omaha Beach in the early hours of the day to pay tribute to those who fell that day, bringing flowers and American flags. 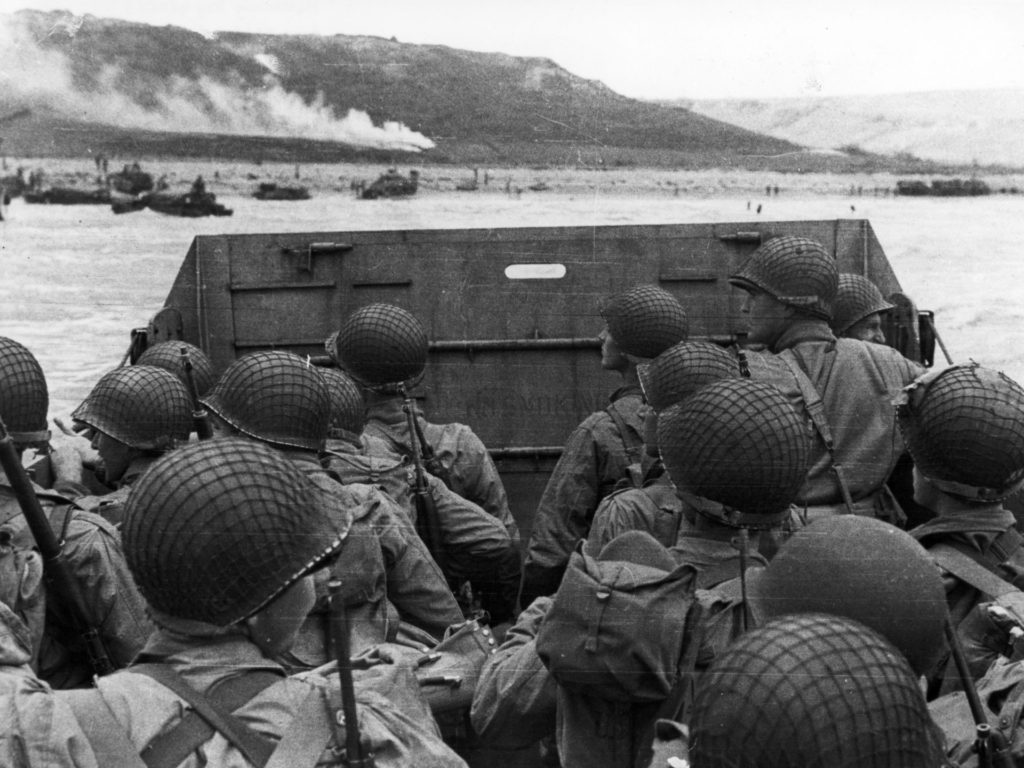 American assault troops in a landing craft near a beachhead in northern France. The landing is supported by naval gunfire. (Photo by MPI/Getty Images) 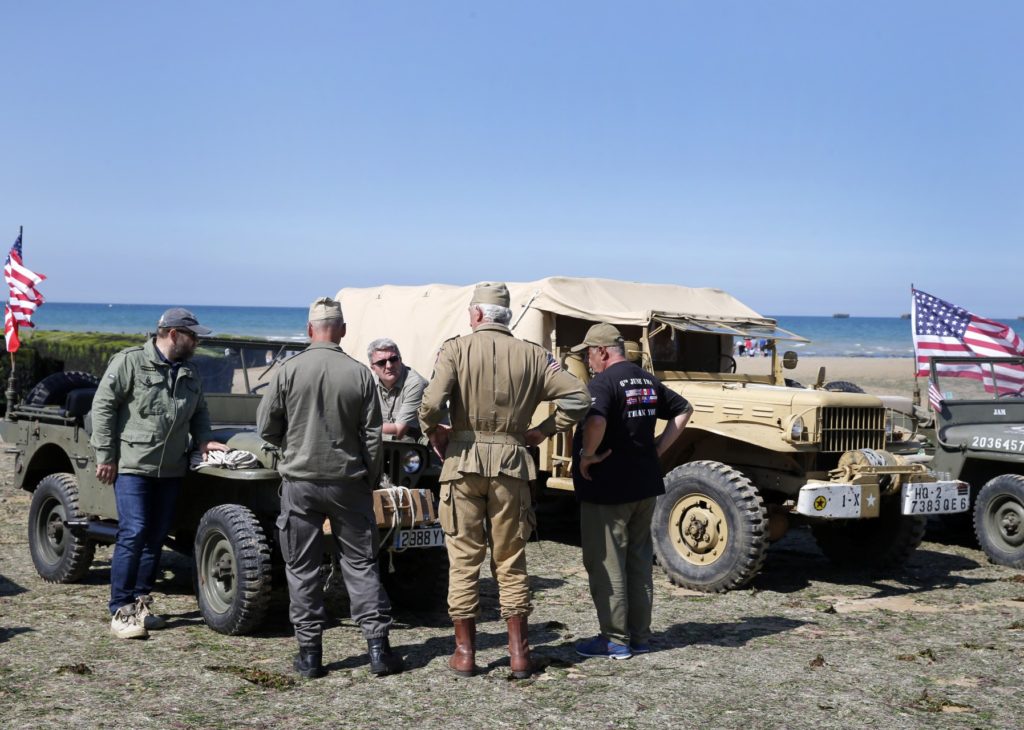 ARROMANCHES-LES-BAINS, FRANCE – JUNE 05: People dressed in WWII military uniforms gather on the beach to attend the commemorations marking the 77th anniversary of D-Day on June 05, 2021 in Arromanches-les-Bains, France. With extensive travel restrictions in place due to the Covid-19 pandemic, commemorations of the pivotal WWII operation are smaller affairs this year, with most veterans marking the occasion closer to home. (Photo by Thierry Chesnot/Getty Images)

On D-Day, 4,414 Allied troops lost their lives, 2,501 of them Americans. More than 5,000 were wounded. On the German side, several thousand were killed or wounded.

Later on Sunday, another ceremony will take place at the American cemetery in Colleville-sur-Mer, on a bluff overseeing Omaha Beach, to be broadcast on social media.

The cemetery contains 9,380 graves, most of them for servicemen who lost their lives in the D-Day landings and ensuing operations. Another 1,557 names are inscribed on the Walls of the Missing.

“In the face of the threats of today, we should act together and show unity,” Parly said, “so that the peace and freedom last.” 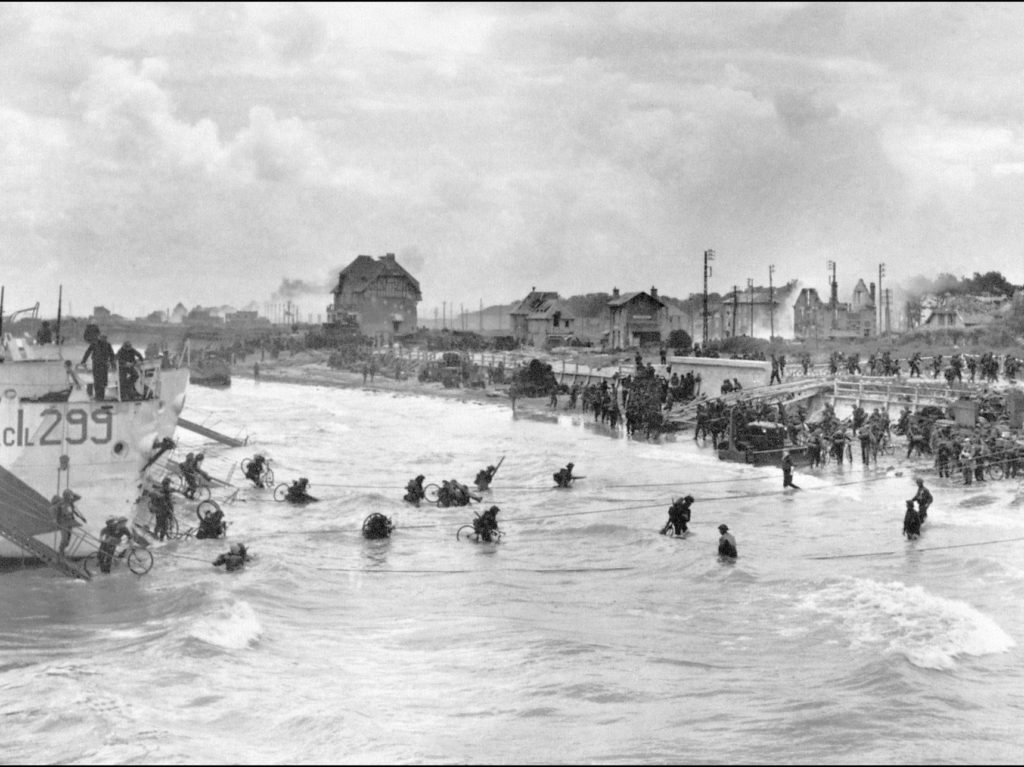 Canadian soldiers from 9th Brigade land on June 6, 1944 with their bicycles at Juno Beach in Bernieres-sur-Mer during D-Day while Allied forces are storming the Normandy beaches. D-Day, 06 June 1944 is still one of the world’s most gut-wrenching and consequential battles, as the Allied landing in Normandy led to the liberation of France which marked the turning point in the Western theatre of World War II. (STRINGER/AFP via Getty Images) 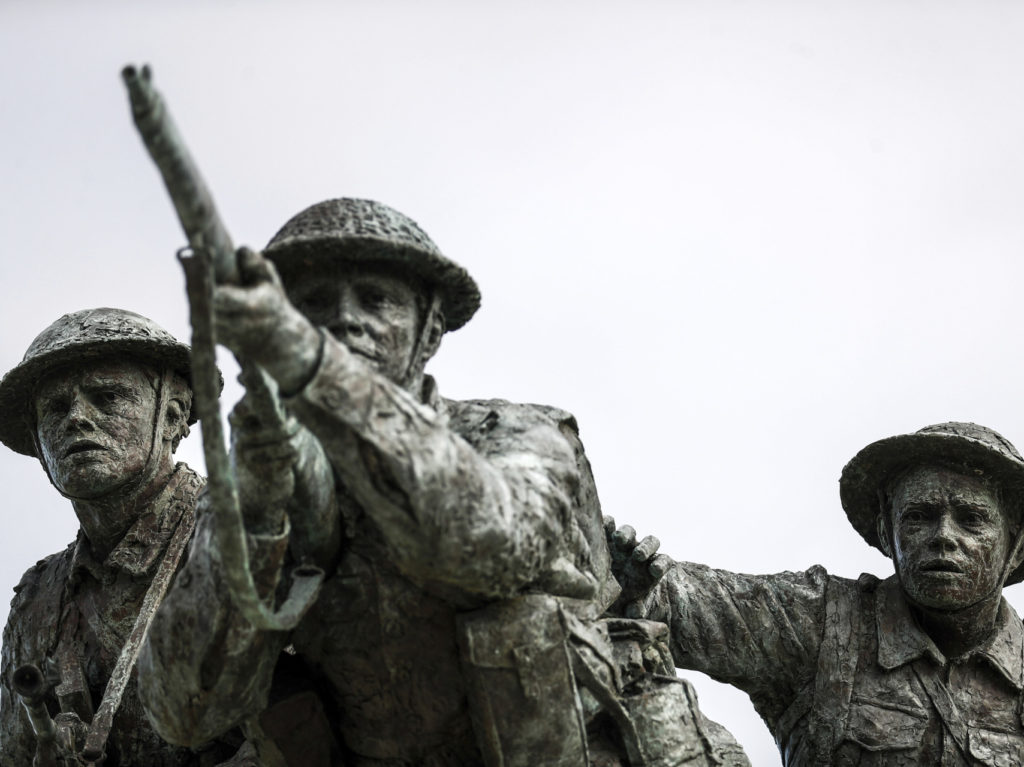 This picture taken at the new British Normandy Memorial at Ver-sur-Mer, on the 77th anniversary of D-Day, Sunday June 6, 2021, shows a statue of British soldiers. (Sameer Al-Doumy, Pool via AP) 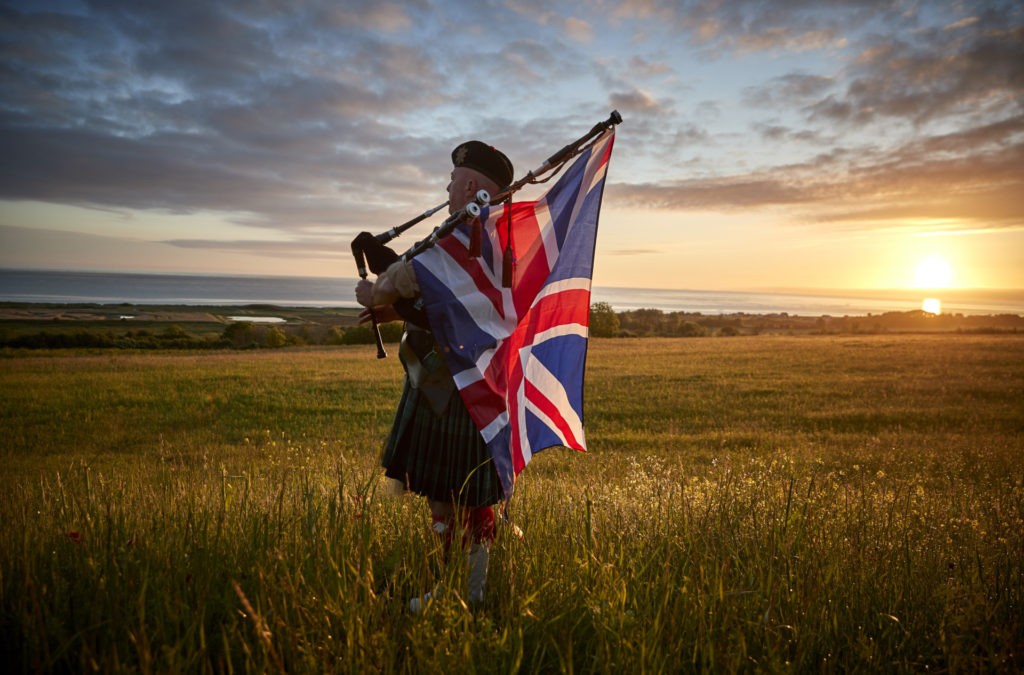 VER-SUR-MER, FRANCE – JUNE 06: British Piper Steve Black plays at sunrise to mark the 77th anniversary of D-Day at the British Normandy Memorial on June 06, 2021 in Ver-sur-Mer Normandy, France. With extensive travel restrictions in place due to the COVID-19 pandemic, commemorations of the pivotal WWII operation are smaller affairs this year, with most veterans marking the occasion closer to home. (Photo by Kiran Ridley/Getty Images for Normandy Memorial Trust)