It’s the tenth anniversary of the London riots and I’m starting to feel nostalgic. If only we could recapture the lost innocence and optimism of that magical era when all we had to worry about was a few hundred rioters in various London suburbs torching and looting a few buildings; when there didn’t seem too much wrong with the world that a few water cannons couldn’t sort out…

At the time, I remember, it all seemed a very big deal. The 2011 riots had been triggered by the death on August 4th of a black man named Mark Duggan who was shot by undercover armed police who claimed he was about to buy a gun. By the end of that week, millions of pounds worth of property had been destroyed or looted, businesses had been destroyed, and five people had died including a 68-year old man who was attacked while trying to stamp out a litter-bin fire. It was the worst civil unrest Britain had seen in a generation.

Ten years on, though, I’m not sure I believe a single word we were told at the time about the riots and their origins. Duggan, for example, may have been a wrong ‘un with a long criminal record, but it’s obvious now that his death was entirely unnecessary and that the police tried to cover this up. 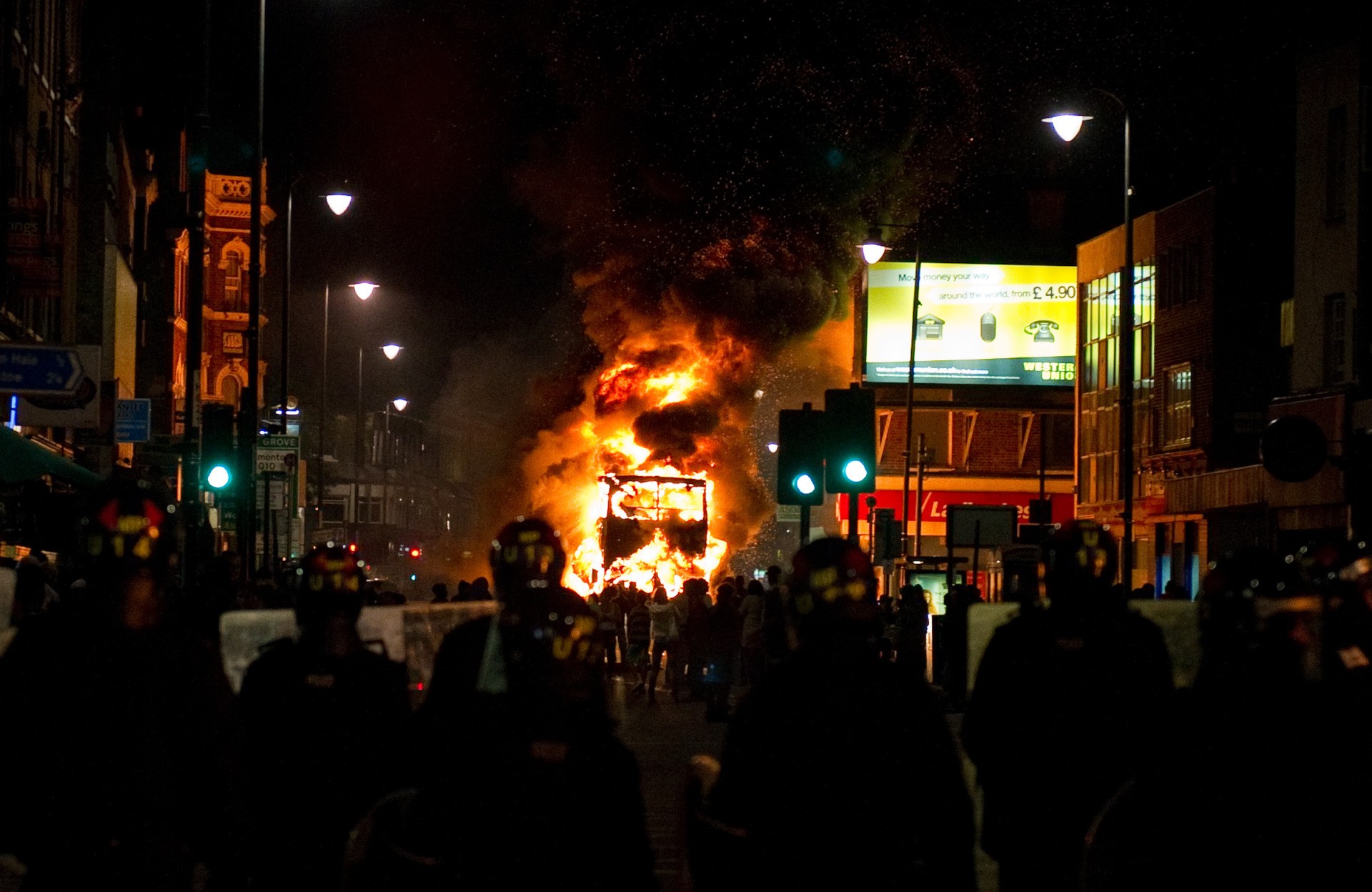 As a BBC retrospective reminds us:

A gun is found about seven metres from where Mr Duggan was shot. It had not been fired.

The Independent Police Complaints Commission (IPCC) later announces it “may have given misleading information to journalists to the effect that shots were exchanged” between Mr Duggan and the police.

Hmm. Hardly surprising that friends and family of Duggan’s converged on Tottenham police station the following Saturday (August 6th) to get answers; nor that when they didn’t get any answers it all escalated into several day’s rioting and looting.

This isn’t at all to defend rioting. Clearly, most of the people involved were in it for the free stuff, the mayhem and the buzz, not out of any high moral principle or a burning desire to see justice done.

Everyone just clicked and said, ‘yeah, this is our chance’. Do what we have to do. Cause mayhem. It felt like we were on a leash for years and we’ve come off that leash.

“Every type of person was there. There was some guy, a white guy, in shorts, flip-flops and a straw hat.

“It was really enjoyable, actually. At one stage, it was like a street party. I just went down there as a spectator. I really did.

“Lots of us went along, just to watch, but found ourselves caught up in it.” 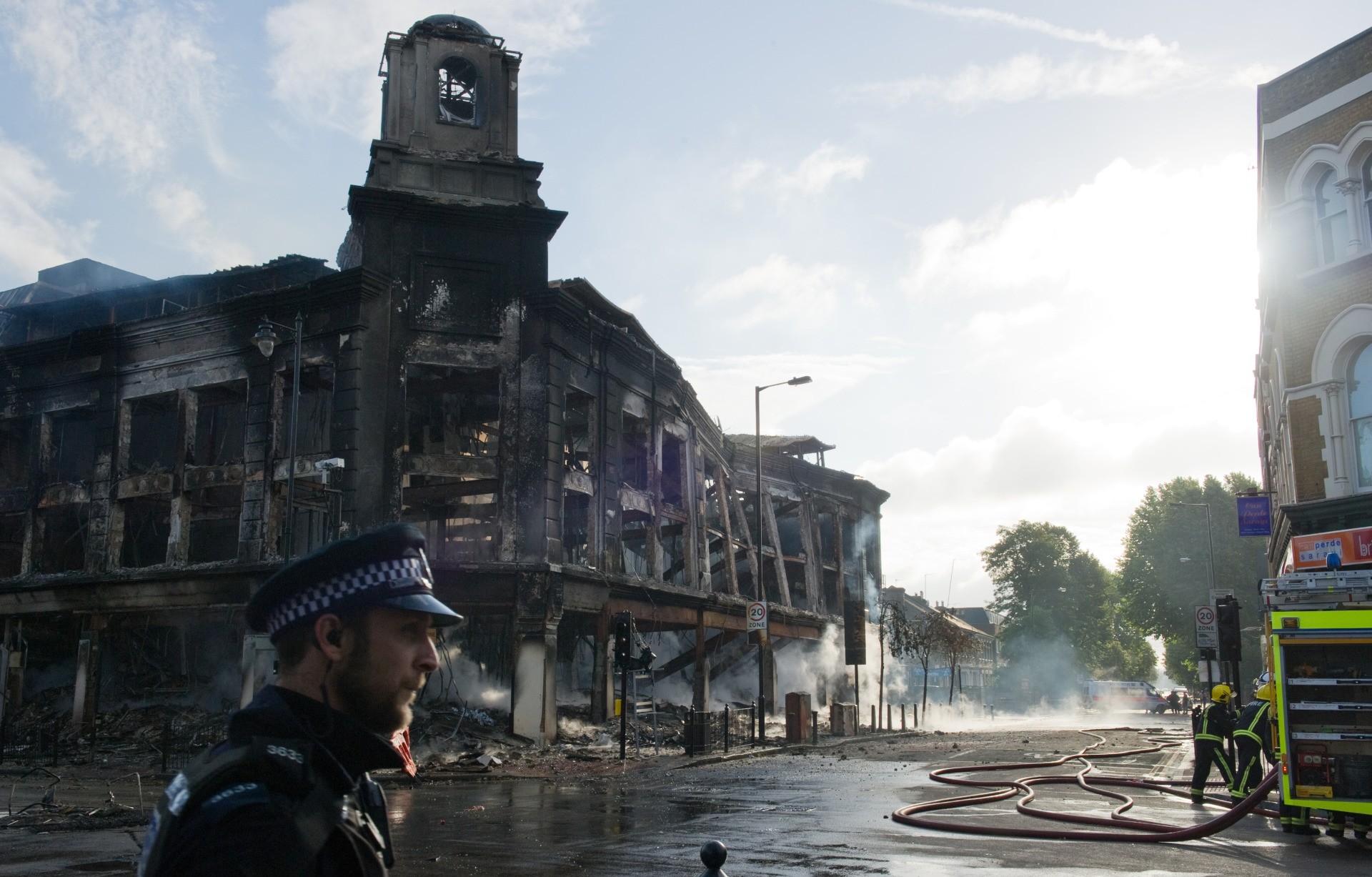 For a time it seemed as if the police had completely lost control (probably because they HAD lost control) and that the violence could escalate to engulf every part of London – and all the other cities across country experiencing copycat riots.

Then, mysteriously, the riots fizzled out.

Or maybe not so mysteriously according to this participant quoted by the BBC:

What made everything stop? Easy. The shops ran out of stuff.

Definitely, the best commentary on the London riots at the time or since was Peter Hitchens’s on Sky News.

He correctly anatomised the social malaise which had created an amoral climate in which civil unrest could flare up at any moment.

The left wing liberal reformers who run our society have attacked every single institution from the family to the school and reduced it to nothing. They’ve eviscerated the police. They talk about tough sentences. There doesn’t exist such a thing as tough sentencing in our society. These people will not be punished.

But his answer, again correctly, was not simply that there should be more police. He recognised that the entire justice system is biased against law-abiding citizens, especially when they make the mistake of trying to defend their own property.

For a long time people who’ve tried to defend themselves against burglars have been hauled in by the police and charged with offences. It ought to stop for good, this nonsense. We ought to be allowed to defend ourselves.

This is especially pertinent given his subsequent comments about Britain’s moral decline as Christianity has fallen by the wayside.

There is no basis on which people brought up in this country can judge right and wrong. So we’re left with ad hoc ethics, which is practical atheism. There is no reason to think anything as particularly right or particularly wrong except insofar as it suits you.

I totally share Hitchens’s Stygian despair. His price for being so consistently right has, of course, been the tittering mockery of the chattering classes. On the Sky panel discussion, for example, you can see Communist-turned-politically-correct, Establishment mouthpiece, Times columnist David Aaronovitch barely suppressing a giggle because he knows that he, Aaronovitch, represents the safe, sensible, socially acceptable view whereas Hitchens is just some right-wing crazy…

What has changed for me in the decade that elapsed since those riots is I have become even more anti-Establishment even than Hitchens. At the time I remember feeling delighted that the then Mayor of London, one Boris Johnson, was considering getting water cannons to deal with the rioters: clearly, this was the sort of firm action needed if my then London home was not going to end up being burned down.

Nowadays I have a lot more sympathy. I don’t believe, like some lefty sociologist would, that rioters are ‘victims of society’. But I do totally understand grievances against a self-serving, corrupt, brutal and mendacious Establishment that views them at best as cattle to be corralled and at worst as vermin to be exterminated. And the reason I understand it is because of late — in the last 18 months especially — many, many more of us have become victims of that Establishment.

Back in 2011, those with a grievance were generally on the margins of society. In 2021, however, there are a lot more of us out there of all ages, races and social classes with a lot more to complain about: business owners whose livelihoods have been wantonly destroyed by the lockdown; people who’ve lost loved ones to suicide or untreated cancers; vaccine sceptics who are being deliberately singled out by government propaganda campaigns and treated as pariahs; the Awake (maybe ten per cent of us and growing by the day) who recognise that the lockdowns, the quarantines, the travel bans, the vaccine passports are merely the first step towards a global tyranny, orchestrated by our useful idiot political class, along the lines of the Great Reset.

And that’s another reason I feel nostalgic about those 2011 riots. Compared to the horror and violence and massive social unrest that I fear will be coming our way shortly, they’ll look like a picnic in the park. 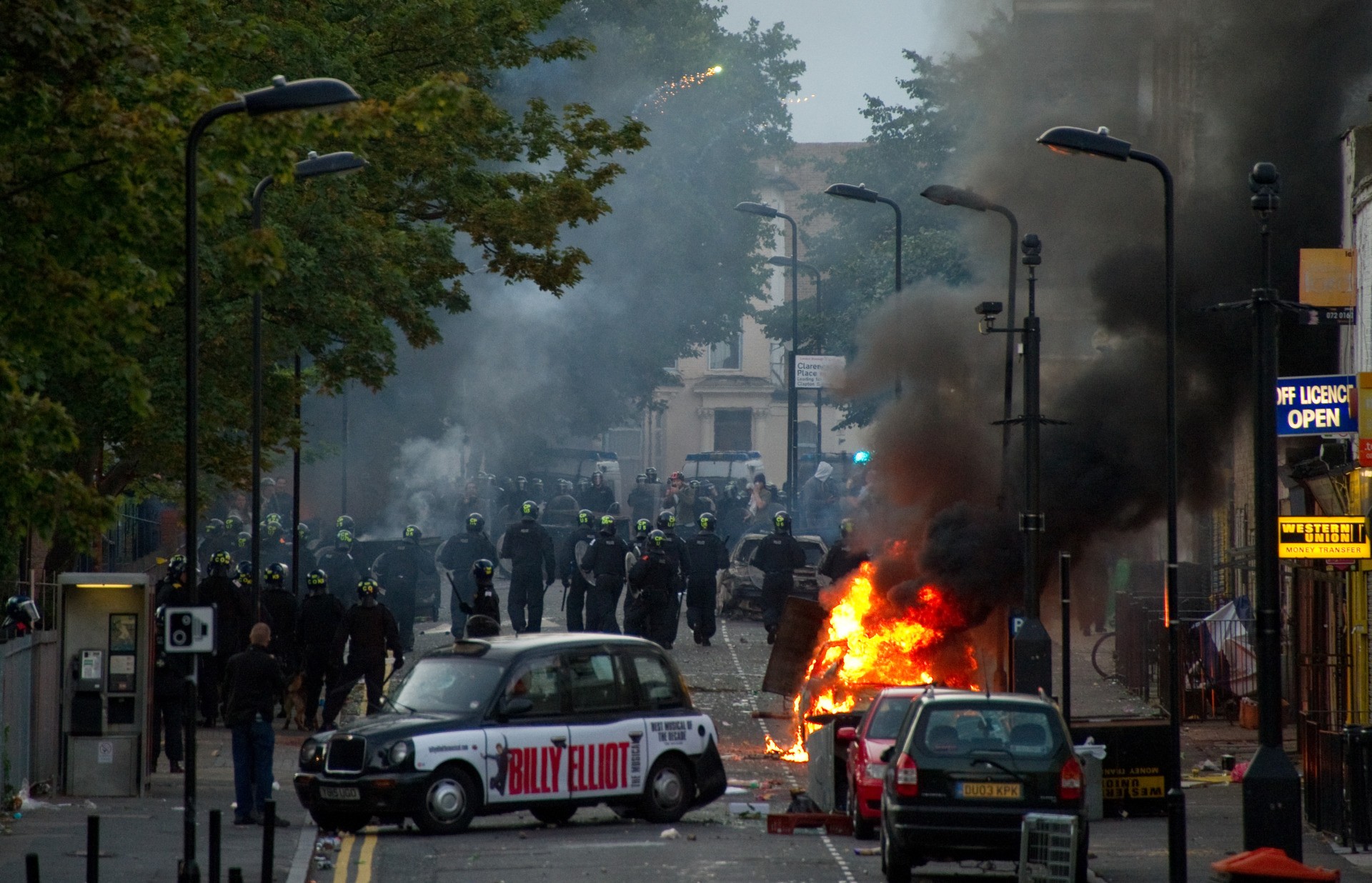 Riot police tackle a mob after a number of cars are set alight in Hackney, north London on August 8, 2011. Riot police faced off with youths in fresh violence in London today in the third day of disorder after some of the worst rioting in the British capital in years at the weekend. The riots broke out in the north London district of Tottenham on August 6, following a protest against the death of a local man in a police shooting last week, and the violence spread to other parts of the city on August 7. AFP PHOTO/LEON NEAL (Photo credit should read LEON NEAL/AFP via Getty Images)