Horatio Nelson, the one-eyed, one-armed hero of the Battle of the Nile, the Battle of Trafalgar, and other signature British clashes with Revolutionary and Napoleonic France, dying at the moment of his greatest victory when a French sniper shot him through the spine, is to have a “troubling” monument to his memory adorning Deptord Town Hall reviewed by Goldsmiths University.

Sir Francis Drake, who circumnavigated the globe, claimed California for England as Nova Albion, and sent the fabled Spanish Armada into disarray before its planned invasion of the British Isles at the Battle of Gravelines, had also been targeted, according to a Telegraph report. 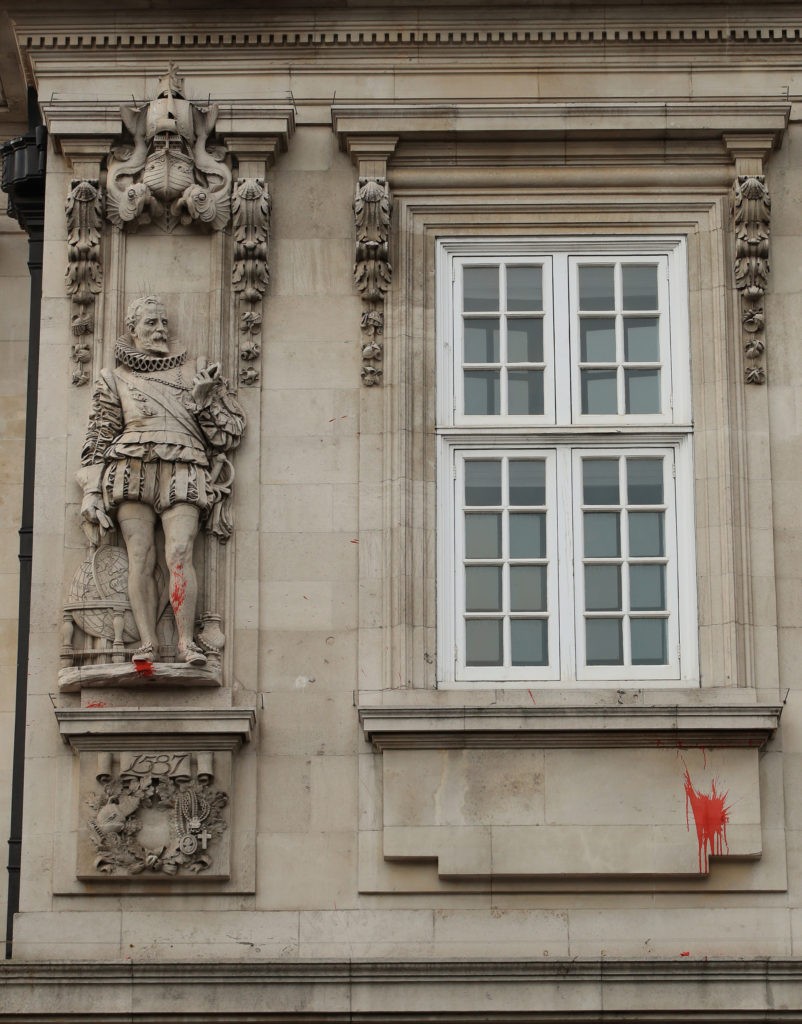 LONDON, ENGLAND – JUNE 11: A general view of Deptford Town Hall, Goldsmiths featuring a paint-spattered statue of Sir Francis Drake on June 11, 2020 in London, England. The recent anti-racism protests sweeping the United States and Europe have heightened scrutiny of statues and other monuments that honour supposedly controversial figures, some with links to the slave trade or accused of espousing racist ideologies. (Photo by Andrew Redington/Getty Images)

Drake, born around 1540 AD, appears to have been targeted because of his involvement in some early slave voyages before he became an esteemed explorer and scourge of the Spanish Empire.

Nelson, meanwhile, is having his legacy subjected to a very much posthumous review by the National Maritime Museum on vague charges of the “aspects of slavery relating to the Royal Navy”, although Goldsmiths may have in mind a letter he allegedly wrote in defence of Caribbean plantations as his alleged crime — although this is regarded by many as a forgery.

“Deptford Town Hall is a local landmark so it is only right that we ask local people what they think about the statues,” claimed the Warden of Goldsmiths, Professor Frances Corner, adding that the monuments are an embodiment of what he described as the “complex legacy of the area’s maritime heritage.”

“We want those living in the area to engage openly and honestly with troubling aspects of the history these statues represent and tell us how they want these issues to be addressed,” Corner insisted in comments quoted by The Telegraph.

To that end, the London university is soliciting almost 9,000 households to give their views on the supposedly controversial monuments. 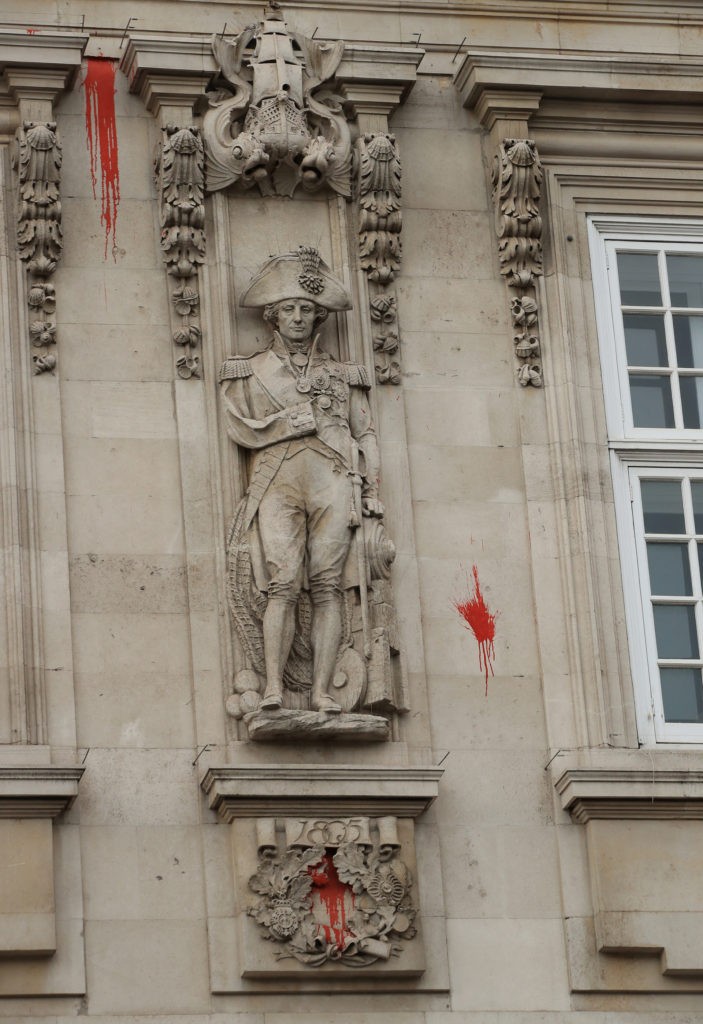 LONDON, ENGLAND – JUNE 11: A general view of Deptford Town Hall, Goldsmiths featuring a paint-spattered statue of Horatio Nelson on June 11, 2020 in London, England. The recent anti-racism protests sweeping the United States and Europe have heightened scrutiny of statues and other monuments that honour controversial figures, some with links to the slave trade or accused of espousing racist ideologies. (Photo by Andrew Redington/Getty Images)

Meanwhile, philanthropist and parliamentarian Thomas Guy is to have his statue outside Guy’s Hospital — which he founded — moved to a less prominent location and tarnished with a plaque highlighting slavery links.

The wheels for this move began turning many months ago as Black Lives Matter activists and their allies in academia and the culture sector began systemically targeting British statues, and comes despite the fact an online consultation saw 75 per cent of respondents come out against interfering with Guy’s memorial, according to the MailOnline.

Guy, a one-time apprentice bookseller and son of a carpenter made good, funded many almshouses and hospital wards, with Guy’s Hospital being something of a signature creation founded to care for “the poorest and sickest of the poor”.

Guy’s connection to the slave trade is fairly indirect, stemming from the fact that he owned debts which were converted to equity in the South Sea Company as part of a swap, and the Company built up a part of its capital through the slave trade, which at the time was considered legitimate commercial activity in both European and African societies, and indeed through most of the wider world. 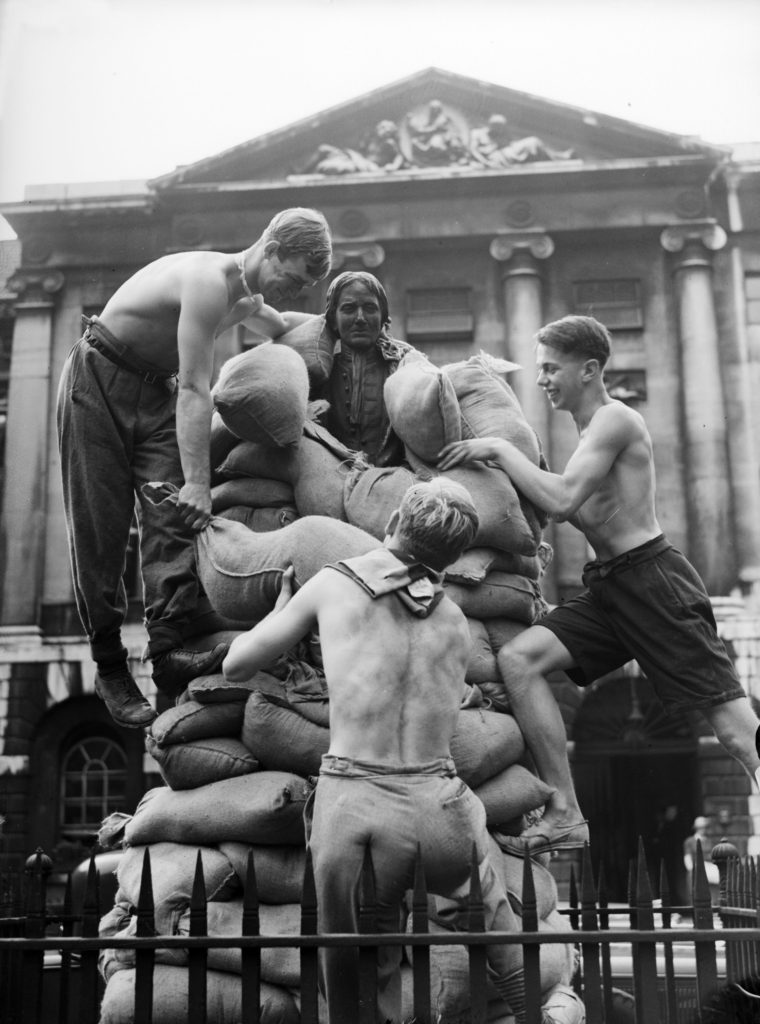 30th August 1939: A group of bare-chested young men piling sandbags around the statue of the founder, Sir Thomas Guy at Guy’s Hospital, London in the days leading up to the Second World War. (Photo by Fox Photos/Getty Images)