LONDON (AP) – A serving London police officer was sentenced to life in prison without the possibility of parole Thursday for the kidnapping, rape and murder of a woman he tricked into his car using his police identification and COVID-19 laws.

Wayne Couzens, 48, was accused of falsely arresting 33-year-old Sarah Everard for violating lockdown restrictions as she walked home from visiting a friend in south London on March 3. Prosecutors said he handcuffed Everard, drove her far outside the city, and then raped and killed her.

Couzens had pleaded guilty to the charges. 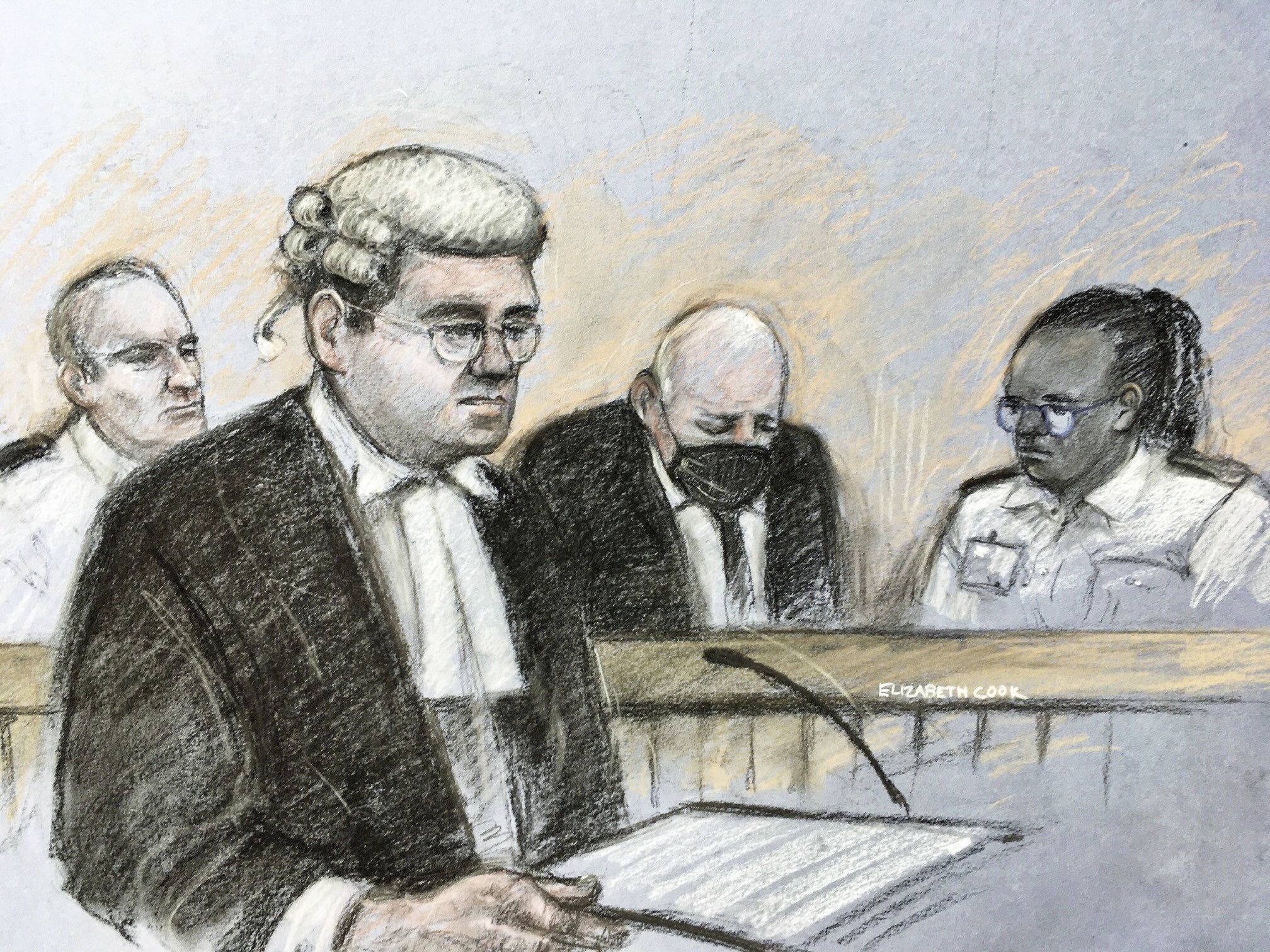 This court artist sketch by Elizabeth Cook shows prosecutor Tom Little QC speaking as former Metropolitan Police officer Wayne Couzens, 48, sits in the dock at the Old Bailey in London, Wednesday Sept. 29, 2021, Wayne Couzens appeared at London’s Central Criminal Court charged with the kidnap, rape and murder of 33-year-old Sarah Everard, who disappeared while walking home from visiting a friend in south London on March 3. Couzens has pleaded guilty to the charges. (Elizabeth Cook/PA via AP)

In handing down the sentence, Justice Adrian Fulford said Couzens misused his role as police officer and the circumstances of the case were “devastating, tragic and wholly brutal.” Couzens went “hunting a lone female to kidnap and rape,” having planned the crime in “unspeakably” grim detail, the judge said.

The seriousness of the case was so “exceptionally high” that it warranted a whole life sentence, Fulford added. The sentence means that Couzens will die in prison with no chance of parole.

The body of Everard, a marketing executive, was found in woodland in Ashford, Kent, about 60 miles (nearly 100 kilometers) southeast of London, a week after she went missing. Prosecutors said Couzens strangled her with his police belt before setting fire to the body.

Couzens joined the Metropolitan Police in 2018 and had worked as part of a team protecting diplomatic locations in central London. He had worked an overnight shift at the U.S. Embassy on the day he kidnapped Everard.

Everhard’s slaying and the officer’s arrest shocked the nation and raised questions about trust in police. London’s Metropolitan Police department has said it was “sickened, angered and devastated” by how one of its own was responsible for the crime.

In the aftermath of Everard’s killing, many questions were raised about trust in police and how police vet their officers. Some also criticized Scotland Yard for not doing enough to protect women and girls and tackle allegations of sexual violence.

Sarah Everard was simply walking home. Women must be able to trust the police not fear them. Women's confidence in police will have been shattered. Urgent action needed. Met Commissioner must resign. My letters to Home Sec & Met👇 pic.twitter.com/eo4CDjI3H3

After Couzens’ arrest, it emerged that he had been accused of indecent exposure at least twice before he murdered Everard, and police is being investigated over whether the allegations were dealt with properly.

The case touched a nerve with women particularly because Everard was abducted while walking home along well-lit areas of Clapham and Brixton — urban, busy areas of the capital frequented by scores of women and girls every day.

Labour Party lawmaker Harriet Harman renewed calls for Cressida Dick, the Metropolitan Police’s first female chief, to step down to allow for the implementation of urgent reforms, including the immediate suspension of officers accused of violence against women.

Awful decision for PM to keep C Dick – never challenge the permanent bureaucracy is the No10 rule now – & it shd be corrected today if she does not resign. Met leadership performance on this & so much else has been a disaster *& WILL CONTINUE TO BE unless huge management changes*