The chief spokesman for the Kremlin has admitted that Russia has incurred “significant” losses during Vladimir Putin’s invasion of Ukraine.

In his first interview with Western media, Dmitry Peskov said that Russia’s “special military operation” in Ukraine has resulted in heavy losses, although the Kremlin spokesman did not reveal how many soldiers have been killed in the war.

“We have significant losses of troops and it’s a huge tragedy for us,” Peskov admitted in an interview with Sky News. 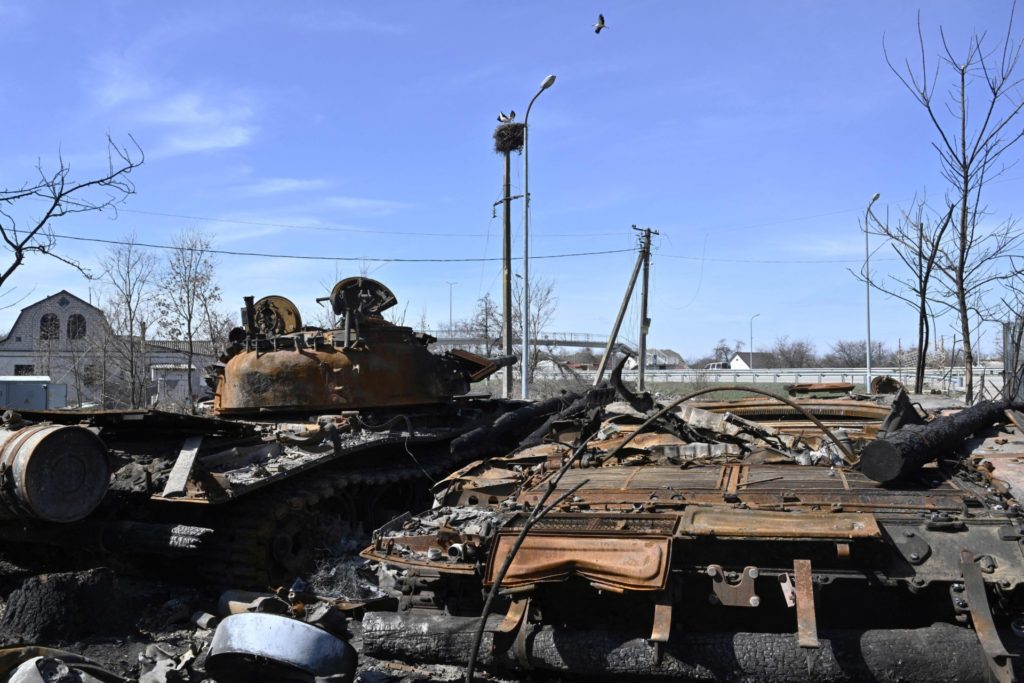 A picture shows burnt Russian tanks next to a road west of Kyiv, on April 7, 2022, during Russia’s military invasion launched on Ukraine. Six weeks after Russia invaded its neighbour, its troops have withdrawn from Kyiv and Ukraine’s north and are focusing on the country’s south-east, where desperate attempts are underway to evacuate civilians.  (Photo by GENYA SAVILOV/AFP via Getty Images)

While current estimates are difficult to ascertain in the fog of war, late last month NATO claimed that the Russian military death toll could be as high as 15,000, with some 40,000 captured, killed, wounded, or missing.

Russia has only admitted publicly to a few hundred deaths, however, last month a pro-Kremlin newspaper quickly deleted an article claiming that 10,000 Russian soldiers had perished.

The Russian spokesman also refrained from saying how many civilians have been killed since the full-scale invasion was launched in February, saying that he would not provide an answer until the figures were “double confirmed”. 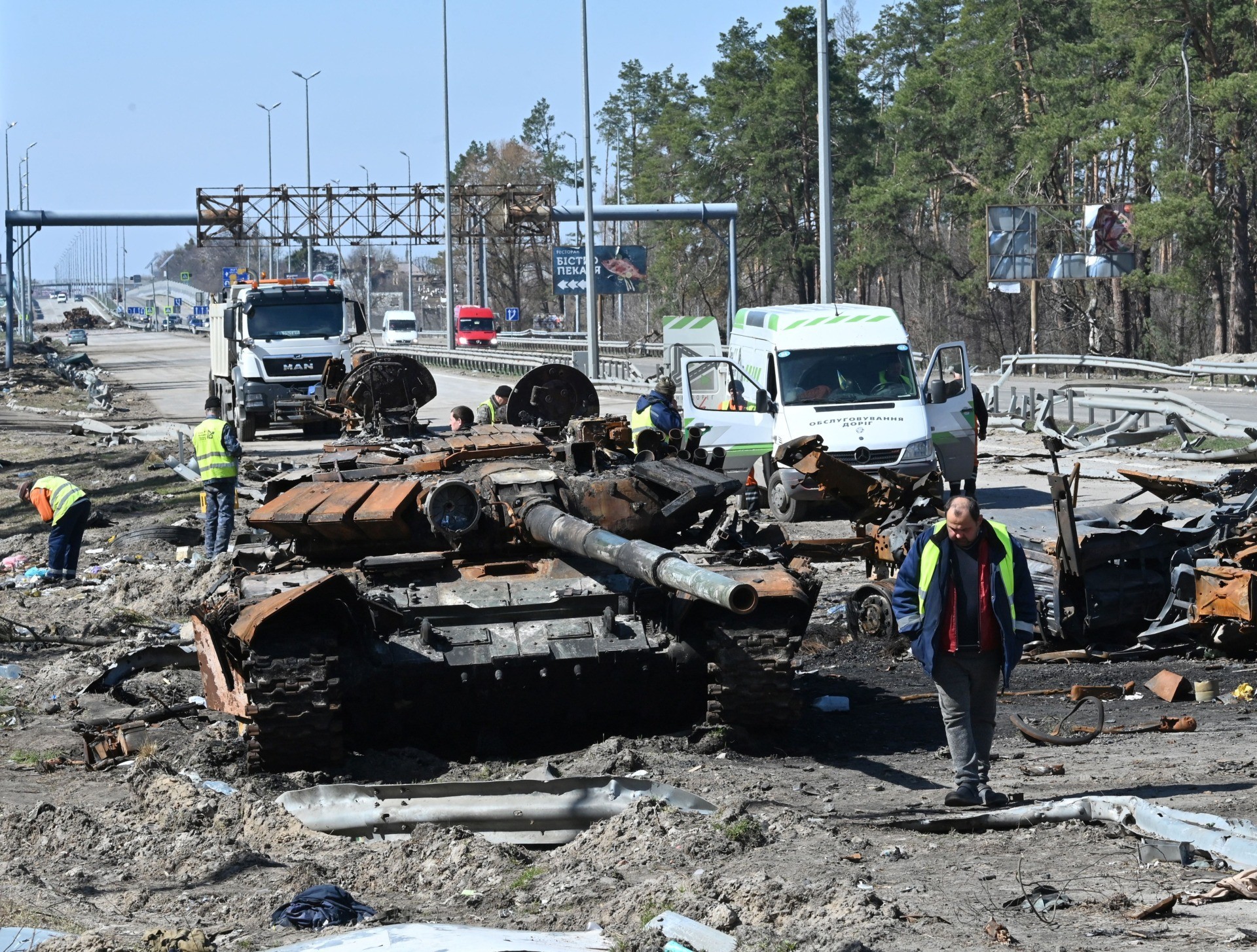 Road service workers clean debris around a burnt Russian tank and vehicle on a road west of Kyiv, on April 7, 2022, during Russia’s military invasion launched on Ukraine. (Photo by GENYA SAVILOV/AFP via Getty Images)

Peskov, who refused to characterise the invasion as a war, did deny accusations of war crimes or genocide being committed by the Russian military.

Earlier this week, the Associated Press claimed that its reporters had witnessed dozens of dead bodies of civilians in Bucha, near Kyiv (Kiev), prompting Western governments to impose more sanctions on Moscow.

“We’re living in days of fakes and lies,” said Peskov, who claimed that the photos and satellite images purporting to show dead civilians in Bucha were a “bold fake” and “well-staged insinuation, nothing else”.

“We deny the Russian military can have something in common with these atrocities and that dead bodies were shown on the streets of Bucha,” the Kremlin spokesman said. 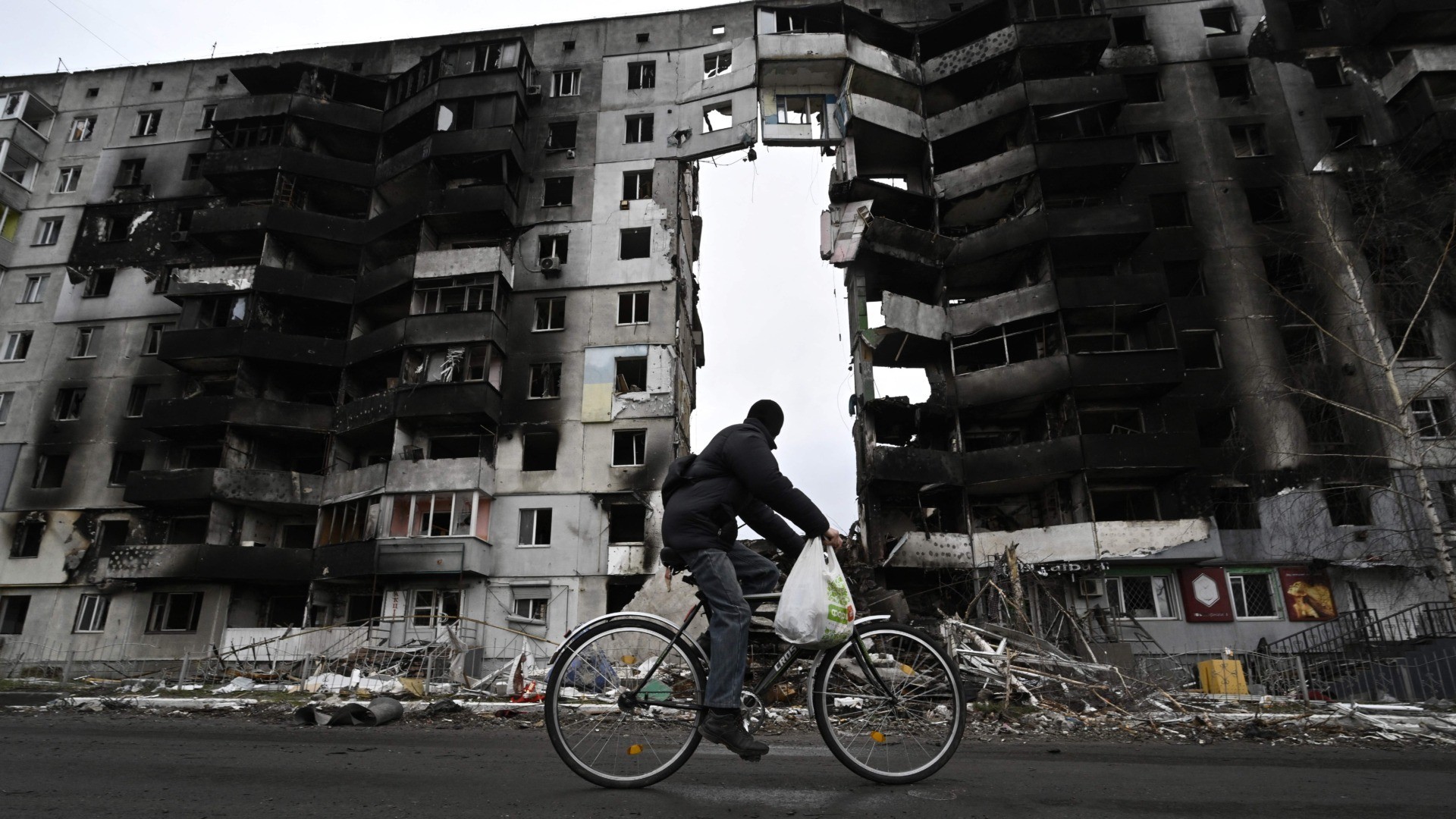 A cyclist passes by a destroyed building in the town of Borodianka, northwest of Kyiv, on April 6, 2022. The Russian retreat last week has left clues of the battle waged to keep a grip on Borodianka, just 50 kilometres (30 miles) north-west of the Ukrainian capital Kyiv. (Photo by GENYA SAVILOV/AFP via Getty Images)

Peskov went on to scoff at the notion of Russia’s President Vladimir Putin facing a war crimes tribunal, as Britain’s Prime Minister Boris Johnson has suggested, saying: “We don’t see any possibility for that, we don’t consider it to be realistic.”

Turing his ire on Mr Johnson, the Russian spokesman said: “He’s very loud in his rhetoric about Russia from the beginning of the operation, he’s rather not constructive in his attitude.

“When people were killed in Donbas by Ukrainian nationalists, when they were heavily bombarded and shelled by heavy artillery, we have never heard a word coming from Mr Johnson,” he said. 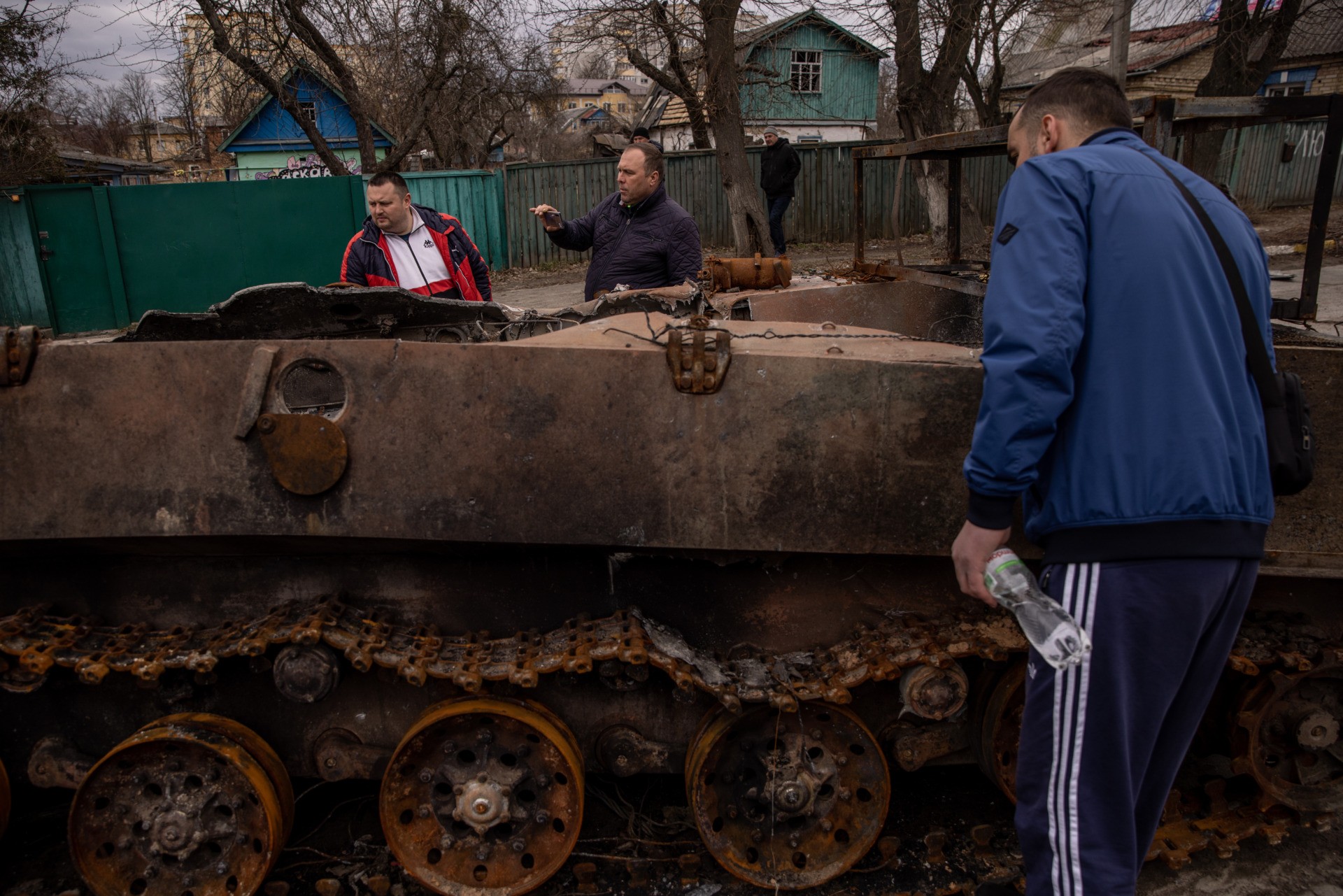 BUCHA, UKRAINE – APRIL 06: People look at a destroyed Russian military vehicle on a street on April 06, 2022 in Bucha, Ukraine. The Ukrainian government has accused Russian forces of committing a “deliberate massacre” as they occupied and eventually retreated from Bucha, 25km north-west of Kyiv. (Photo by Chris McGrath/Getty Images)

Peskov went on to say that Moscow believes that NATO itself is not a peaceful defensive alliance, but rather a “machine for confrontation” and that Russia is seeking to “rebalance the situation” by securing its flanks.

Should Finland or Sweden join NATO, Peskov said, Russia will look to “make our Western flank more sophisticated in terms of ensuring our security.”

“Everything is about mutual deterring and should one side — and we consider NATO to be one side — be more powerful than the other, especially in terms of nuclear arms, then it will be considered a threat for the whole architecture of security and it will force us to take additional measures,” he said.

Mr Peskov did signal the possibility of the war ending in the near future, though, saying that the Russian government hopes that it will “reach its goals” or strike a peace deal with Ukraine so that the “operation” will conclude in the “coming days, in the foreseeable future”. 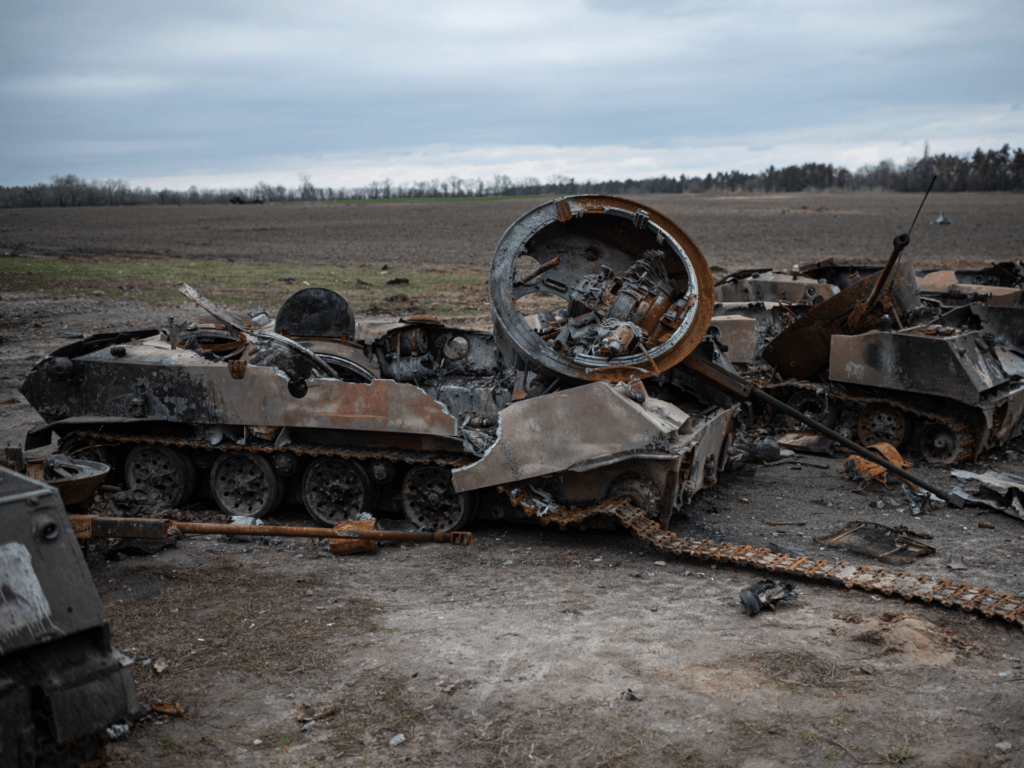 HOSTOMEL, UKRAINE – APRIL 06: Burnt Russian tanks and APCs are seen in a field on April 6, 2022 in Hostomel, Ukraine. Hostomel was occupied for more than a month by Russian forces as they pushed toward the Ukrainian capital, before ultimately retreating to Belarus last week. (Photo by Alexey Furman/Getty Images)