ZHYTOMYR, Ukraine (AP) – As soon as they had finished burying a veteran colonel killed by Russian shelling, the cemetery workers readied the next hole. Inevitably, given how quickly death is felling Ukrainian troops on the front lines, the empty grave won’t stay that way for long.

Col. Oleksandr Makhachek left behind a widow, Elena, and their daughters Olena and Myroslava-Oleksandra. In the first 100 days of war, his grave was the 40th dug in the military cemetery in Zhytomyr, 90 miles (140 kilometers) west of the capital, Kyiv.

He was killed May 30 in the Luhansk region of eastern Ukraine where the fighting is raging. Nearby, the burial notice on the also freshly dug grave of Viacheslav Dvornitskyi says he died May 27. Other graves also showed soldiers killed within days of each other – on May 10, 9th, 7th and 5th. And this is just one cemetery, in just one of Ukraine’s cities, towns and villages laying soldiers to rest.

President Volodymyr Zelensky said this week that Ukraine is now losing 60 to 100 soldiers each day in combat. By way of comparison, just short of 50 American soldiers died per day on average in 1968 during the Vietnam War’s deadliest year for U.S. forces.

Among the comrades-in-arms who paid respects to the 49-year-old Makhachek at his funeral on Friday was Gen. Viktor Muzhenko, the Ukrainian Armed Forces’ chief of general staff until 2019. He warned that losses could worsen.

“This is one of the critical moments in the war, but it is not the peak,” Muzhenko told The Associated Press. “This is the most significant conflict in Europe since World War II. That explains why the losses are so great. In order to reduce losses, Ukraine now needs powerful weapons that match or even surpass Russian weaponry. This would enable Ukraine to respond in kind.”

Concentrations of Russian artillery are causing many of the casualties in the eastern regions that Moscow has focused on since its initial invasion launched Feb. 24 failed to take Kyiv. 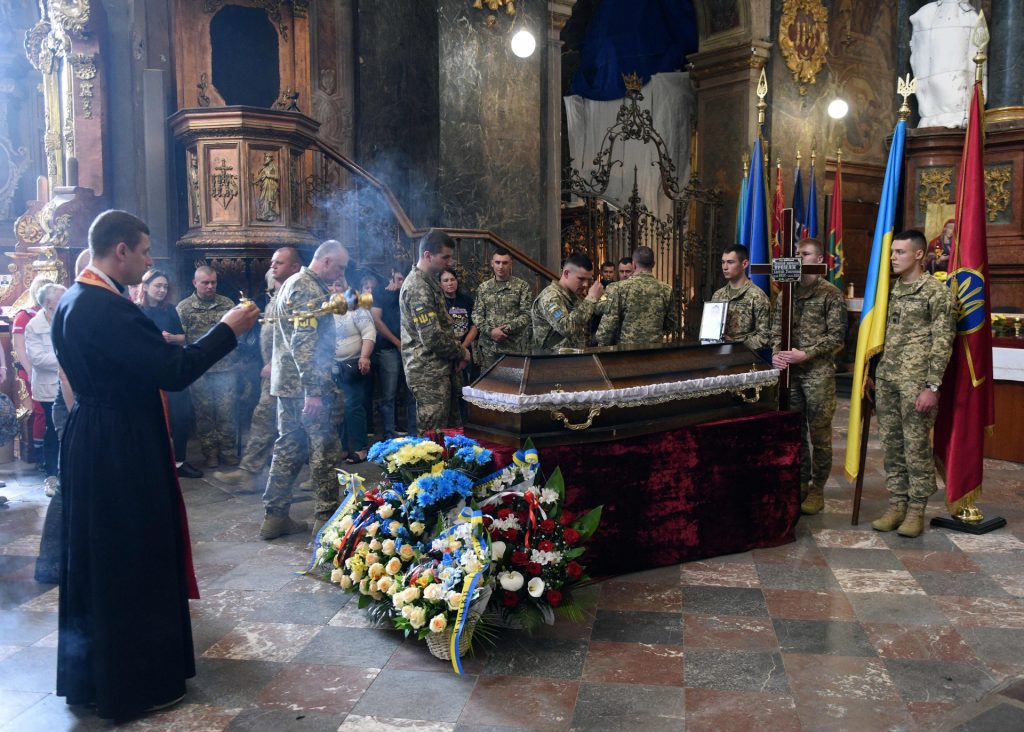 A priest serves at the funeral ceremony of Ukrainian serviceman Serhiy Trocan, killed during the Russian invasion of Ukraine, at the Saints Peter and Paul Garrison Church, in western Ukrainian city of Lviv, on June 3, 2022. (Photo by YURIY DYACHYSHYN/AFP via Getty Images)

Retired Lt. Gen. Ben Hodges, the former commanding general of U.S. Army forces in Europe, described the Russian strategy as a “medieval attrition approach” and said that until Ukraine gets promised deliveries of U.S., British and other weapons to destroy and disrupt Russian batteries, “these kinds of casualties are going to continue.”

“This battlefield is so much more lethal than what we all became accustomed to over the 20 years of Iraq and Afghanistan, where we didn´t have numbers like this,” he said in an AP phone interview.

“That level of attrition would include leaders, sergeants,” he added. “They are a lot of the brunt of casualties because they are the more exposed, constantly moving around trying to do things.”

Makhachek, a military engineer, led a detachment that laid minefields and other defences, said Col. Ruslan Shutov, who attended the funeral of his friend of more than 30 years.

“Once the shelling began, he and a group hid in a shelter. There were four people in his group, and he told them to hide in the dugout. He hid in another. Unfortunately, an artillery shell hit the dugout where he was hiding.” 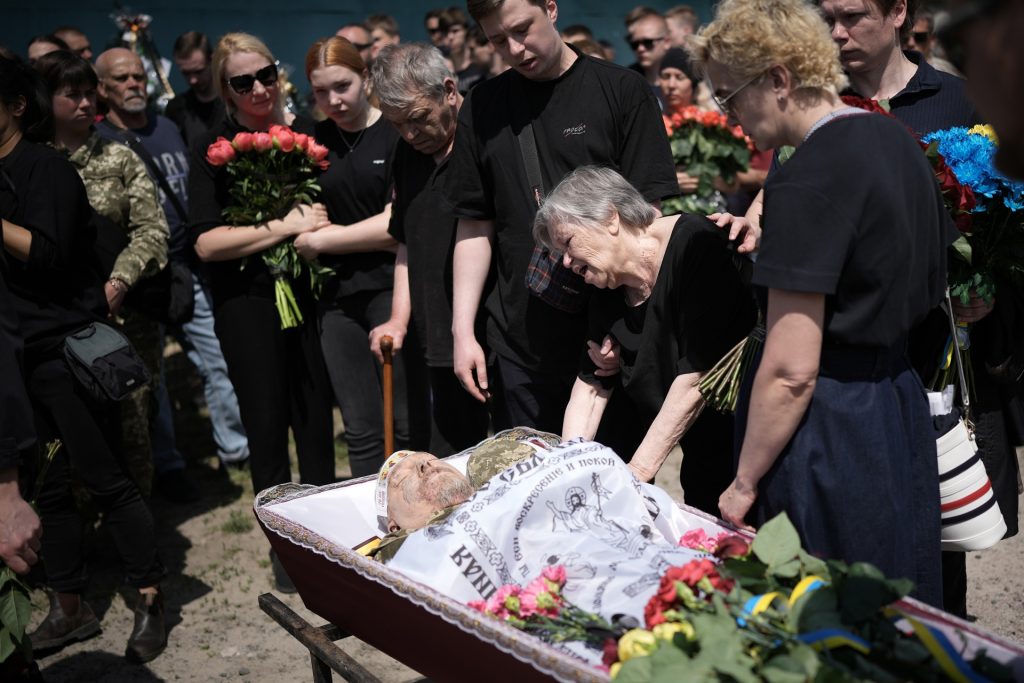 Mourners attend the funeral Yurii Sergiiv who was killed fighting the Russian invasion on June 04, 2022 in Kyiv, Ukraine. Neither the Ukrainian government nor its Western allies have provided recent casualty figures for Ukrainian forces, but President Zelensky said in an interview earlier this week that 60 to 100 Ukrainian soldiers are being killed every day amid the intense fighting in the Donbas region. (Photo by Christopher Furlong/Getty Images)

Ukraine had about 250,000 men and women in uniform before the war and was in the process of adding another 100,000. The government hasn’t said how many have died in more than 14 weeks of fighting.

Nobody really knows the number of Ukrainian civilians who have been killed or how many combatants have died on either side. Claims of casualties by government officials – who may sometimes exaggerate or lowball their figures for public relations reasons – are all but impossible to verify.

Western analysts estimate far higher Russian military casualties, in the many thousands. Still, as Ukraine’s losses mount, the grim mathematics of war require that it find replacements. With a population of 43 million, it has manpower.

“The problem is recruiting, training and getting them on the front line,” said retired U.S. Marine Col. Mark Cancian, a senior adviser at the Center for Strategic and International Studies in Washington.

“If the war is now moving into a long-term attrition struggle, then you have to build systems to get replacements,” he said. “This has been a difficult moment for every army in combat.” 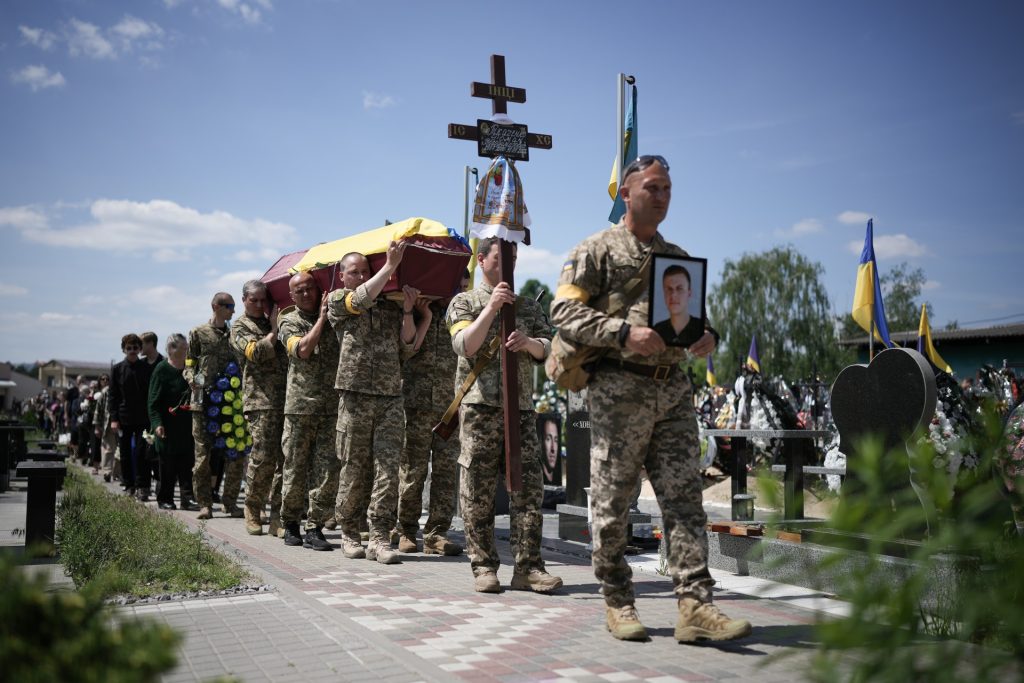 Ukrainian soldiers carry the coffin of Roman Tkachenko, aged 21, who was killed fighting the Russian invasion near Kharkiv on June 04, 2022 in Kyiv, Ukraine. (Photo by Christopher Furlong/Getty Images)

“The more Ukrainians know about what is happening at the front, the more the will to resist will grow,” he said. “Yes, the losses are significant. But with the help of our allies, we can minimize and reduce them and move on to successful offensives. This will require powerful weapons.” 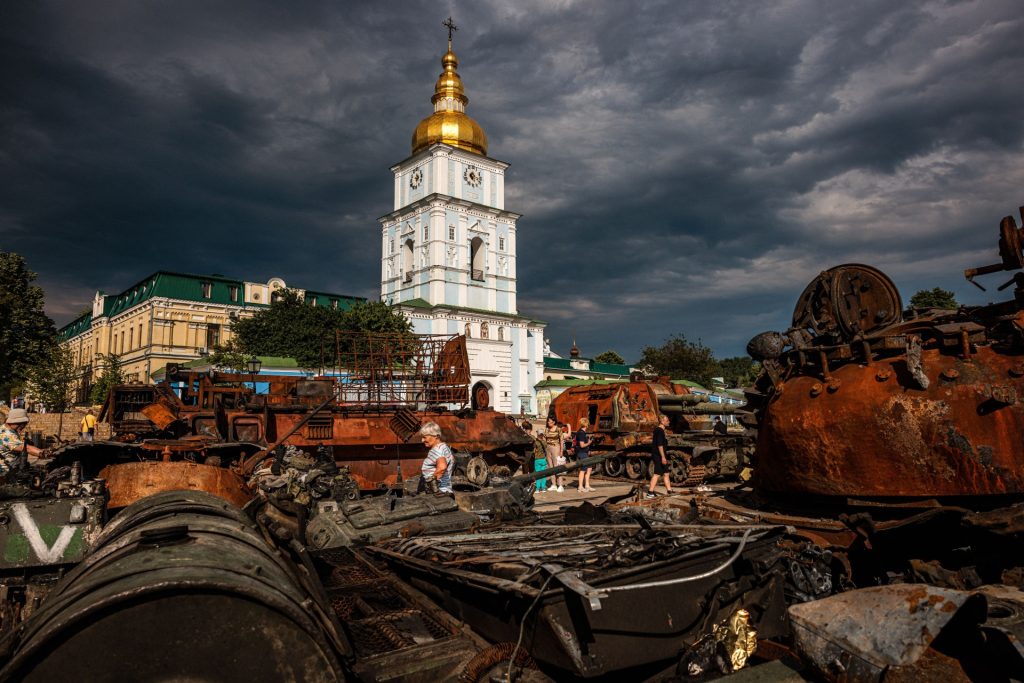 Yuras Karmanau contributed to this report from Lviv.