Too much is never enough, NATO ministers were told in Romania on Tuesday, as they met to drum up more support for Ukraine, including a direct U.S. call for increased deliveries of electrical components for the war-torn country’s decimated power transmission network.

Military aid – lethal and non-lethal – is also on the shopping list alongside a rise in shipments of fuel, generators, medical supplies, winter equipment and drone-jamming devices.

Ahead of the meeting, AP reports NATO Secretary-General Jens Stoltenberg warned Russian President Vladimir Putin “is trying to use winter as a weapon of war against Ukraine” and that NATO’s allies and Ukraine “need to be prepared for more attacks.”

U.S. Secretary of State Antony Blinken will announce substantial aid for Ukraine’s energy grid, on top of previous contributions of military hardware from U.S. stockpiles as funded by taxpayers.

Individual allies are also likely to announce fresh supplies of military equipment for Ukraine — chiefly the air defense systems that Kyiv so desperately seeks to protect its skies.

NATO, as an organization, will not, to avoid being dragged into a wider war with nuclear-armed Russia, AP sets out.

Even so, foreign ministers will explore and chart the future.

“Over the longer term we will help Ukraine transition from Soviet-era equipment to modern NATO standards, doctrine and training,” Stoltenberg said last week.

This will help Ukraine’s armed forces meet NATO’s criteria for membership and better integrate into the alliance, should it be admitted.

The Bucharest plea for more contributions come after the U.S. confirmed last week it is sending Ukraine another $400 million in lethal military aid. 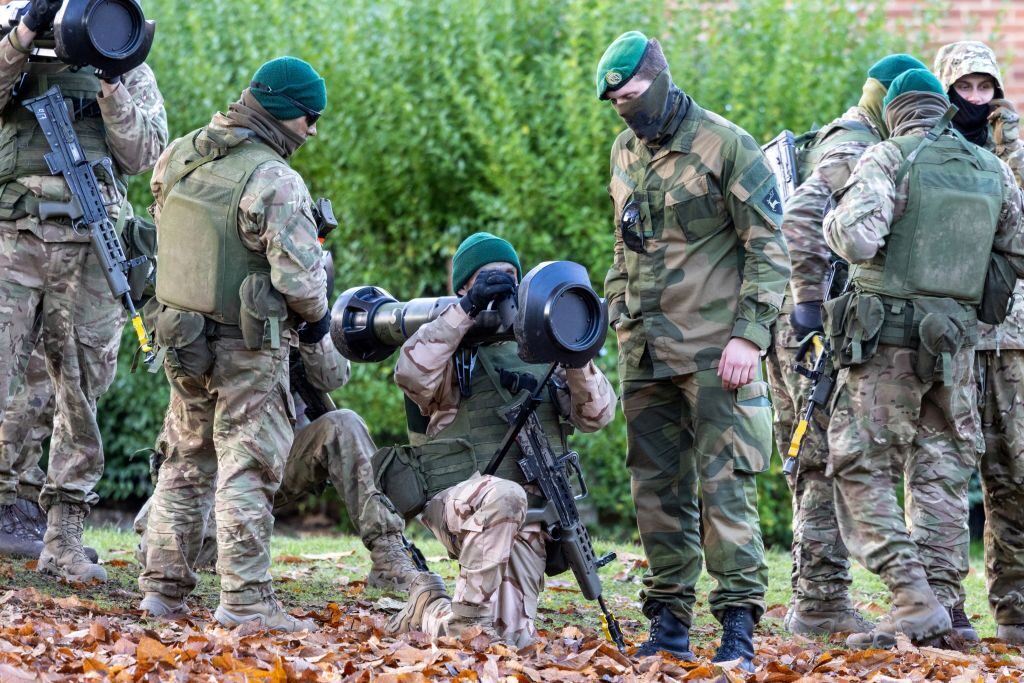 Soldiers from Ukraine take part in a training exercise organised by members of the Joint Expeditionary Force (JEF), in the north east of England on November 9, 2022. JEF members – comprising Denmark, Estonia, Finland, Iceland, Latvia, Lithuania, the Netherlands, Norway, Sweden and the U.K. – have been at the forefront of providing diplomatic, financial, humanitarian and military support to Ukraine. (ANDY COMMINS/POOL/AFP via Getty Images)

That tops up more than $19.7 billion in weapons and other equipment already drawn from DoD stocks since the conflict began on Feb. 24.

As Breitbart News reported, the additional tranche of arms, munitions, air defense missiles and vehicles will be taken from existing inventories as Ukraine works to defeat Russian efforts to damage critical infrastructure for major cities as winter closes in.

The Biden administration’s current aid outlay is twice as large as the U.S. Army’s underfunded annual spending on the development and purchase of new weaponry and equals about $200 per American.

Congress is sending another $12 billion in military gear and aid to Ukraine, pushing the total transfer up to $65 billion in 2022. https://t.co/KT862YAE1D

Ukraine is also getting the value of U.S. spy aircraft and spy satellites without having to help build those networks.