ROME — Italians across the country are increasingly fed up with the bureaucratic slowness of returning life to normal after strict lockdowns, according to a survey.

A survey of Italians during the final week of May reveals the highest levels of anger as a predominant emotion since the lockdowns began in early March. While feelings of uncertainty and vulnerability both diminished in the last week of May, these were replaced by growing ire at the government’s reluctance to relinquish its stranglehold on society.

As Italians feel more and more confident in their overall health situation, they are losing hope in the future, reveals the survey, conducted by the marketing research company SWG. 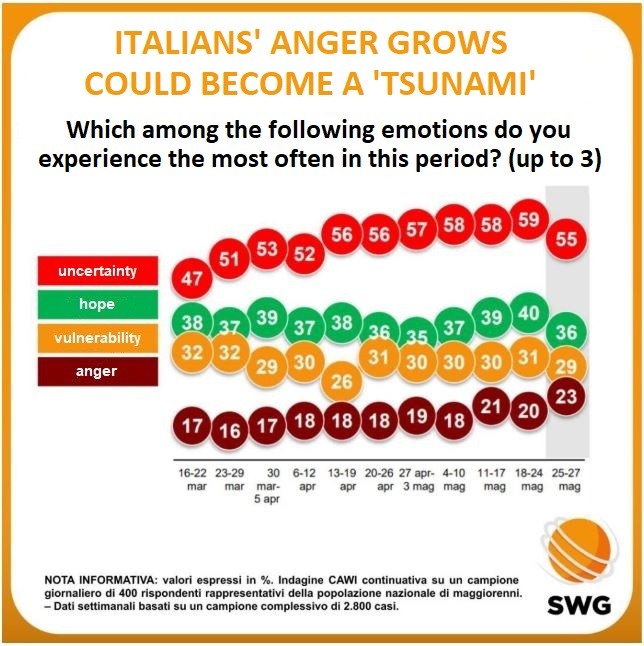 The underlying malaise and increasing rage were in evidence this past weekend, as protests erupted up and down the peninsula, from Milan to Sicily. The anger is chiefly directed at Prime Minister Giuseppe Conte and many of the demonstrators called for his resignation as well as respect for the constitution, which guarantees basic freedoms.

According to an analysis by Roberto Arditti, the president of Kratesis, a strategic management consultancy firm, the evident growing discontent among Italians is a powder keg that will explode if government does not accelerate a return to normal.

While we have witnessed a decline in the primary emotions that dominated the long lockdown phase, only one has grown, that of anger, Arditti observes.

The anger, which has increased from 17 percent in mid-March to 23 percent today, is still manageable, but only if swift action is taken, he states.

According to Arditti, there are two primary causes of the rising resentment, namely the proverbial slowness of the public administration, that seems unable to take immediate action when it is called for, as well as recent discussions over continued isolation of certain regions, which risks provoking deeper divisions in the country.

If the response to the current crisis are slow in coming, “the anger of the Italians could turn into a tsunami,” Arditti said.

Italy is set to open up to interregional and international travel on Wednesday, but continuing restrictions on hotels, coffee bars, restaurants, and firms has made going back to business difficult and in many cases impossible.

Last week, the iconic restaurant Dal Fortunato near the Pantheon in Rome posted large notices outside the building saying that there is no way for the establishment to reopen under current conditions.