The bill to curb immigration supported by President Donald Trump would add to the wealth of Americans.

Trump on Wednesday announced his support for legislation proposed by Senators Tom Cotton, R-Ark., and David Perdue, R-Ga., that would cut legal immigration into the United States by half and grant entry based on education, the ability to speak English, and jobs skills.

While reducing immigration would cut overall U.S. economic growth by reducing population growth, gross domestic product per U.S. resident would grow, according to an analysis of census and economic data by Breitbart News.

Immigrants are responsible for about half of the population growth in the U.S. This population growth contributes to the growth of the labor force and therefore to Gross Domestic Product. According to Joel Prakken of Macroeconomic Advisers, the reduction in the labor force from immigration curbs would “take two to three tenths of a percentage point off GDP growth every year over the next decade.”

As a result, economic growth is likely to be lower than it would be under current law. The Federal Reserve currently estimates that the economy will grow at a 2.1 percent rate this year and sees 1.9 percent the following year. Its most recent estimates say the long run growth rate will be around 1.8%. Using those forecasts, by 2030 U.S. GDP would be around $21.6 trillion.

But that larger GDP would be shared among U.S. population of 359.4 million, according to Census Bureau estimates, compared with 325 million today. Included in those estimates are an additional 16.9 million immigrants. As a result, GDP per capita would be at around $60,100.

Using Prakken’s higher estimated drag of three-tenths of a percentage point, lower immigration would result in a GDP of $21.5 trillion in 2030. But if overall immigration were reduced to 600,000 per year, from the current 1.1 million, the 2030 population would be 350.2 million. GDP per person would be around $61,500. 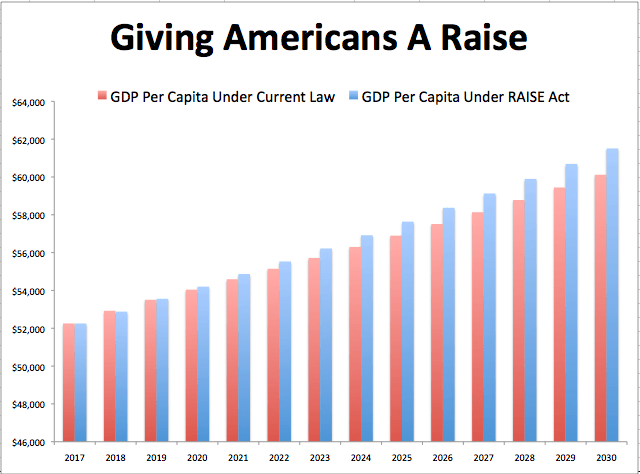 Cutting immigration in half will grow GDP per person in the U.S.

What’s more, it’s likely that more of that additional wealth would accrue to the benefit of working class and poor Americans. New immigrants tend to compete with low income natives and earlier immigrants for less-skilled positions, putting downward pressure on wages. The reduction of immigrants will likely force employers to bid up the wages of these workers. As a result, these workers will receive a higher portion of national income.