Democrat draft amnesties would further skew the flow of federal aid to the big coastal states, according to data touted by pro-amnesty groups.

Two of the six pieces in the amnesty will cost $34.6 billion during the next ten years, according to the Congressional Budget Office. “This proposed amnesty is several times bigger [than the two pieces], so the likely estimate is about $100 billion,” in ten years, after discounting extra taxes, said Steve Camarota, the research director at the Center for Immigration Studies.

The Wall Street Journal reported the ten-year cost would be $140 billion in various aid and spending programs. “All that federal income redistribution is going to flow to areas where the illegal immigrants live,” Camarota said.

Two-thirds of the illegal aliens live in just eight states, according to a “Fact Sheet” produced by the pro-amnesty Center for American Progress (CAP). Once legalized, they will be able to get a wide variety of taxpayers’ aid, including welfare, school funds, Medicaid, and retirement benefits — and nearly all of that money will be spent in those eight states.

The eight states — California, Florida, Georgia, New Jersey, New York, Illinois, North Carolina, and Texas — hold half of the nation’s American population. They will get the federal handouts because they choose to welcome roughly two-thirds of the nation’s illegal migrant populations, even though the migration suppresses American wages, raises their rents, and expands state-wide poverty rates. 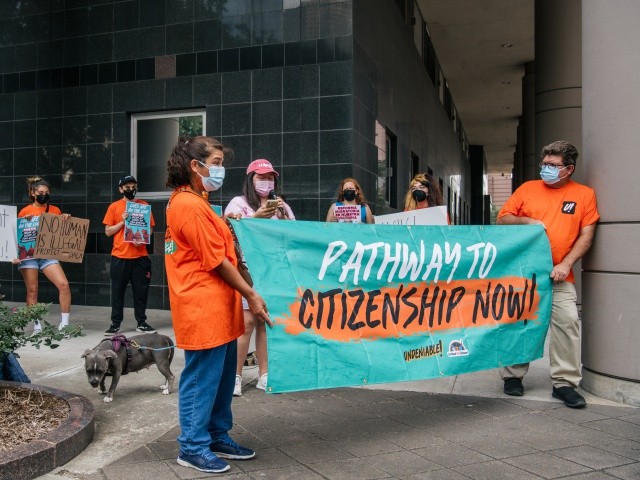 Members of the United We Dream organization participate in a demonstration outside of the U.S. District Courthouse on July 19, 2021, in Houston, Texas. The demonstration was a call for a clear path to citizenship and was held in response to Texas District Judge Andrew Hanen’s ordering of the U.S. government to block new Deferred Action for Childhood Arrivals (DACA) applicants. (Photo by Brandon Bell/Getty Images)

In contrast, 28 smaller states will get only about 11 percent of the welfare windfall because they defended Americans’ wages and housing by minimizing the imported illegal populations.

These 28 states will only get half as much federal transfers per American as the eight big states.

The 28-states calculation excludes Nevada and Colorado. The two Democratic-run states have each welcomed more than 100,000 illegal aliens for blue-c0llar and agriculture jobs, according to the CAP data.

For most Republican legislators, the amnesty bill “is dramatically increasing welfare and other programs’ [spending] in states other than yours,” Camarota said. “The people of West Virginia or Mississippi have to pay for these programs, but they’re not getting any.”

The economic skew may get worse because the amnesty bill also accelerates chain migration, he said.

Most of the chain migrants will settle beside their relatives in the big coastal states, he said.

The chain migration will also shift electoral votes and political power from the smaller states to the bigger states. This year, for example, Democratic Sen. Joe Manchin’s West Virginia is losing one of its three House seats to southern states enlarged by legal and illegal migrants. In 1960, the state had six seats in the House.

The contrast is glaring in the smallest states with the fewest migrants.

The ten states with the smallest populations comprise 2.4 percent of the nation’s population. But under the Democrats’ budget plan, they will get only about 0.1 percent of the federal payout because they have only 72,000 illegal aliens, according to CAP’s scorecard. 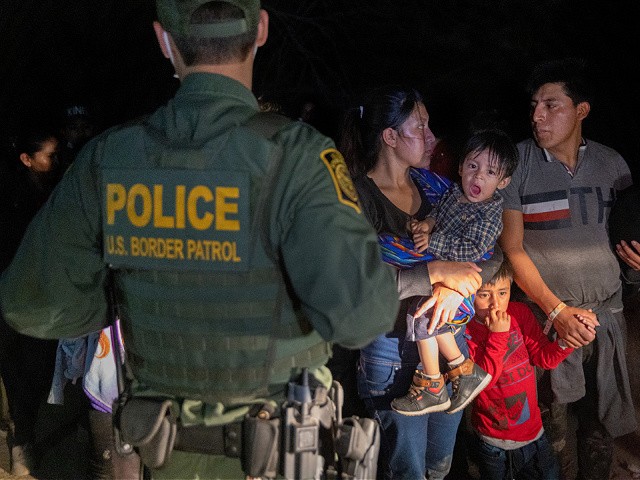 Immigrants wait for a U.S. Border Patrol agent to lead them up from the bank of the Rio Grande after they crossed the U.S.-Mexico border on April 14, 2021, in Roma, Texas. A surge of mostly Central American immigrants crossing into the United States, including record numbers of children, has challenged U.S. immigration agencies along the U.S. southern border. (Photo by John Moore/Getty Images)

CAP wrote the scorecard to tout the claimed wage gains from providing amnesty to illegal workers. Those wage gains will yield $1.5 trillion over the next decade, including a claimed wage gain of $600 per working Americans in 2031, the report claims.

Because our laws are so lax, an important franction of the illegals already has de facto legal status and they have the documents —  DACA, TPS, Suspension of Removal, Suspension of Deportation. A lot of these groupsalso have people waiting for various Adjustments of Status. They’re llegally here, they count in the illegal aspirants, but they have Social Security numbers.

Second, a lot of illegals we know — based on prior estimates —  either have stolen IDs —  around 700,000 — or they’re former legal workers who still have their Social Security number, perhaps 600,000. It seems unlikely that those people are going to gain very much [in wages].

Also, hey have to assume away [the wage-reduction impact] increased job competition for jobs the illegals could hold. Security guards and school employees, for example.

The promised wage-gain for 160 million or more Americans — $600 in ten years! — is so small it could be wiped away from small shifts in inflation or by the increased housing costs caused by the arrival of many chain-migration migrants.

But CAP’s claimed data about the distribution of wages echoes other ways in which migration shifts wealth away from the heartland states and peripheral states, such as Maine, Vermont, and New Hampshire. 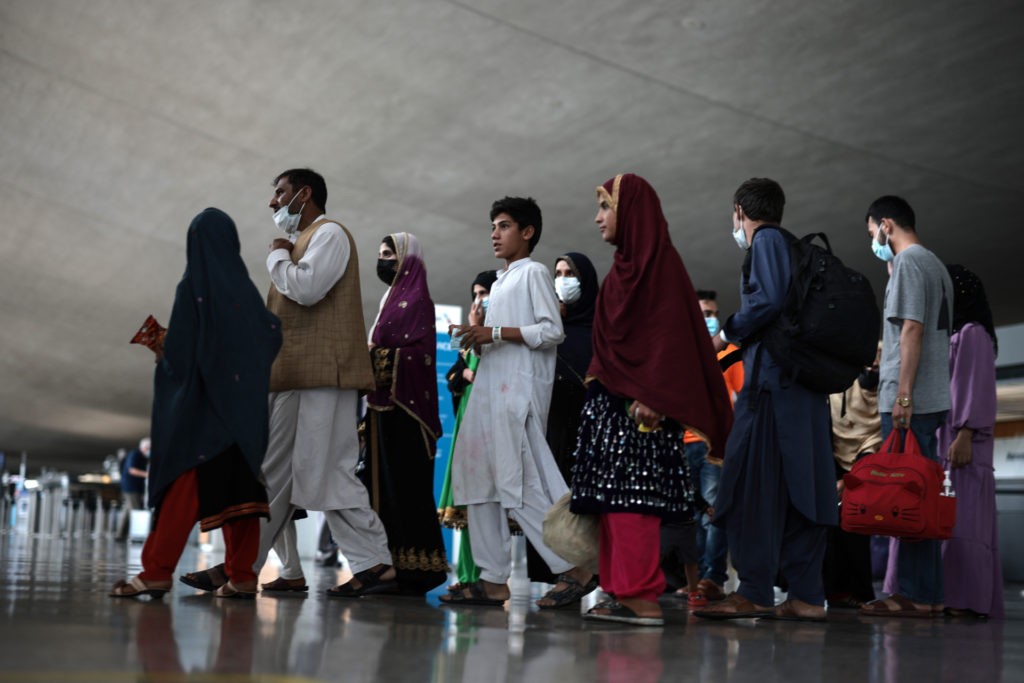 Refugees walk through the departure terminal to a bus at Dulles International Airport after being evacuated from Kabul following the Taliban takeover of Afghanistan on August 31, 2021, in Dulles, Virginia. (Photo by Anna Moneymaker/Getty Images)

The migration also increases welfare rolls and poverty, partly by raising housing costs for many Americans in the coastal states, such as New York and California. For example, on September 1, several Americans and illegal migrants were drowned in their basement apartments in the high-immigration district represented by Rep. Alexandria Ocasio-Cortez (D-NY). The New York Times reported:

In one of the most expensive housing markets in the world, they have offered low-income New Yorkers, including many working-class families who work in restaurants and hotels, affordable places to live. The basement apartments also provide some extra income for small landlords, many of whom are also immigrants.

Deborah Torres, who lives on the first floor of a building in Woodside, Queens, said she heard desperate pleas from the basement apartment of three members of a family, including a toddler, as floodwaters rushed in. A powerful cascade of water prevented anyone from getting into the apartment to help — or anyone from getting out. The family did not survive.

However, Ocasio-Cortez blamed the poverty deaths on a “climate crisis,” not the New York welcome for cheap migrant workers that has cut wages and spiked rents:

As a result, among the people MOST at risk during flash floods here are those living in off-the-books basement dwellings that don’t meet the safety codes necessary to save lives.

These are working class, immigrant, and low-income people & families.

The breadth of investors who founded and funded FWD.us was hidden from casual visitors to the group’s website sometime in the last few months. But copies exist at the other sites.