President Joe Biden’s progressive deputies are boasting about their efforts to fast-track foreigners into Americans’ jobs, society, and voting booths.

“I’m immensely proud of the USCIS workforce … [for] enacting numerous operational and policy changes in response to executive orders from the Biden-Harris Administration,” said a statement from Ur Jaddou, the director of the U.S. Citizenship and Immigration Services agency within Alejandro Mayorkas’ Department of Homeland Security.

The USCIS agency processes foreigners’ requests for work permits, green cards, and citizenship. The agency helps people overseas for U.S. jobs, it helps migrants who illegally sneak over the border, and it helps migrants who are released into the United States by Mayorkas’ customs and border officials.

From October 2020 to the end of September 2021, according to Jaddou, the agency provided citizenship t0 855,000 migrants and rewarded 172,000 people with green cards for taking jobs needed by Americans.

The immigration system is an “engine of American strength,” Jaddou claimed, promising “In the upcoming year, we will continue to serve the [foreign] public with compassion and reflect America’s promise as a nation of welcome and possibilities for all.”

The phrase, “a nation of welcome,” is increasingly being used by progressives instead of the unpopular “nation of immigrants” demand first pushed in the Cold War.

The rush by Biden’s deputies to pull more migrants into U.S. society comes after President Donald Trump decided in 2020 to largely end the federal government’s economic policy of extracting migrants from foreign countries.

Under Trump, the annual inflow of visa workers, job-seeking “students,” temporary workers, and legal immigrants dropped by 1 million, from 1.6 million in 2017 to under 600,000 in 2021, according to a December 21 report by the U.S. Census Bureau.

The Trump reform burst the cheap labor bubble that allowed investors to grow rich by creating many low-wage companies and jobs during the three decades after Congress spiked migration in 1990. Numerous groups — including JP Morgan and Goldman Sachs — have credited Trump’s reduced labor supply for boosting Americans’ wages and forcing greater investment in labor-saving technology. 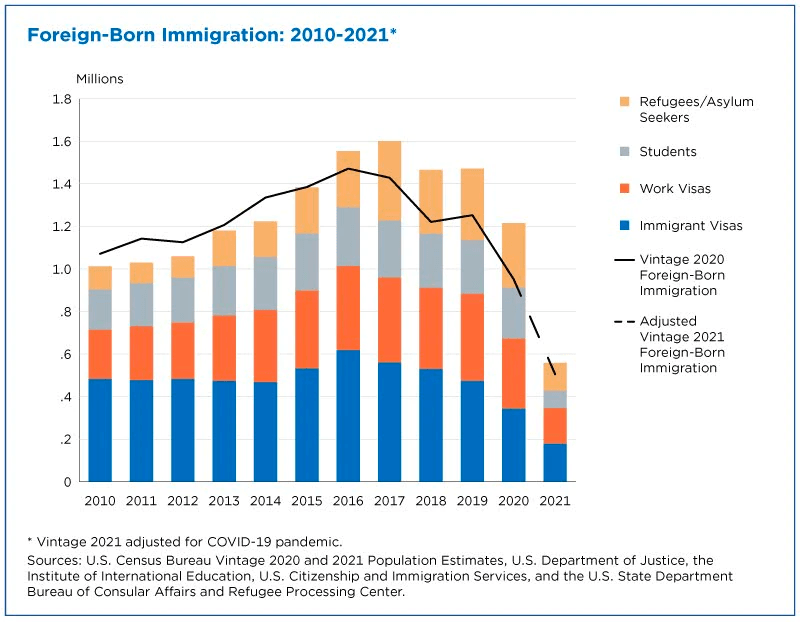 The reduction has also helped to reduce some ethnic conflicts in the United States. For example, an increasing number of Latinos are shifting their political focus from divisive ethnic politics toward shared national concerns, such as wage growth and family budgets.

Biden’s deputies, however, are now working overtime to reinflate the cheap labor bubble.

The year-end report by the USCIS boasted:

By the end of FY 2021 [On October 1], USCIS approved over 172,000 employment-based adjustment of status applications, an increase of 50% above the typical baseline …

[It is] clarifying that it will consider E and L dependent spouses to be employment authorized incident to status and that H-4, E, and L dependent spouses may qualify for the automatic extension of their employment authorization, and providing deferred action and work authorization for petitioners living in the U.S. with pending, bona fide U nonimmigrant status petitions …

The agency also boasted about new regulations to convert migrants into citizens:

USCIS has taken a number of steps to reduce barriers to naturalization and promote citizenship, including phasing out the 2020 version of the Naturalization Civics Test and reverting back to the 2008 Test on March 1 …

On Aug. 20, 2021, a Notice of Proposed Rulemaking was published that would amend regulations so that individuals … could have their claims for asylum, withholding of removal, or protection under the Convention Against Torture initially adjudicated by a USCIS asylum officer through a nonadversarial proceeding, rather than in immigration court by an immigration judge.

Many polls show that Americans want to like immigrants and immigration. But the bipartisan federal government has exploited that openness since 1990 to extract tens of millions of migrants from poor countries to serve U.S. businesses as workers, consumers, and renters.

That economic strategy is harmful to ordinary Americans: It cuts career opportunities and their wages while it also raises their rents.

A wide variety of little-publicized polls does show deep and broad opposition to labor migration and the inflow of temporary contract workers into jobs sought by young U.S. graduates. This opposition is growing, multiracial, cross-sex, non-racist, class-based, bipartisan, rational, persistent, and recognizes the solidarity Americans owe to each other. 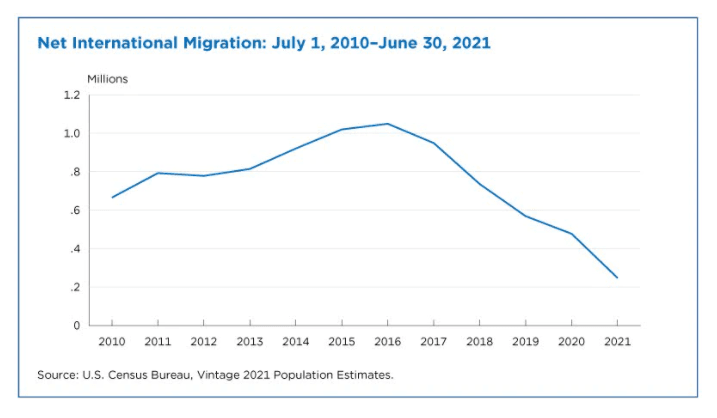