A year into a global human rights campaign urging world leaders to boycott the 2022 Beijing Winter Olympics in protest of genocide and other atrocities under the Chinese government, Brazilian President Jair Bolsonaro has evaded the topic entirely.

Bolsonaro’s silence is partly due to nobody asking – no other foreign government and, apparently, no reporters or NGOs are demanding he take a stand on Chinese human rights abuses. But it is nonetheless striking for many reasons. For one, Brazil has also received the honor of hosting the Olympics, the 2016 Summer Games in Rio de Janeiro, making it an active participant in Olympic history. Brazil is the largest nation in Latin America, granting it outsized influence on politics in the region.

Most important, however, is the fact that Bolsonaro campaigned for the presidency as a staunch anti-communist, vowing to Brazilians that he would become the world leader in advocating against communism and socialism. He has also assumed a leadership role in the fight against Christian persecution, urging the United Nations at its General Assembly summit to act to combat “Christophobia.” China is one of the world’s most prolific persecutors of Christians – disappearing, torturing, and bulldozing alive believers.

“We must move away from Venezuela, put a foot in the ass of socialism, communism,” Bolsonaro said as a presidential candidate. “We cannot admit this ideology in our Brazil.” 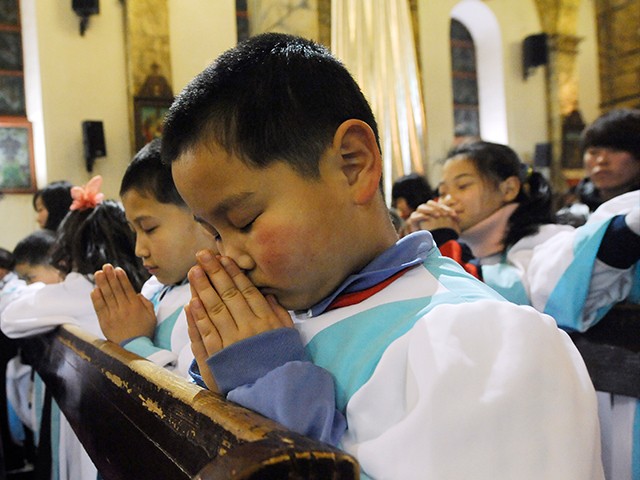 Upon being elected, Bolsonaro promised the Brazilian people the country could no longer “continue to flirt with socialism, communism, populism, and the extremism of the left.” He described helping neighboring Venezuela and Cuba escape their (China-funded) communist regimes as an “obligation.” Shortly after assuming the presidency, during his first General Assembly address, he affirmed that communism leaves “a path of death, ignorance, and stark poverty wherever it goes.”

“China isn’t buying in Brazil. It’s buying Brazil,” he warned in 2018, suggesting he would not privatize parts of Brazil’s state-run electrical firm, Electrobras, for fear that Chinese government-controlled companies would buy it.

A Breitbart News search of coverage of Bolsonaro’s remarks in the past year regarding China, human rights, the Olympics, or any related issue yielded no comments on whether Brazil would participate in the Beijing Games or not. Brazil does not appear on lists of countries that have publicly stated they are considering even a diplomatic “boycott” – a non-boycott in which a country’s politicians, who do not participate in the Olympics, don’t go to the event. The diplomatic “boycott” is set to become a popular cop-out for the free world after the White House confirmed on Monday that American athletes would play in what human rights activists had dubbed the “Genocide Olympics.” But no evidence suggests that Bolsonaro is even considering that.

Bolsonaro has been notably silent on the genocide of the Uyghur people in East Turkistan at the hands of the Chinese Communist Party and on widespread persecution of Christians in the country as well as other religious minorities. Also missing from Brasilia’s priorities list is the potential safety of Brazilian athletes at the Olympics given the recent disappearance of Peng Shuai, a Chinese Wimbledon doubles champion who vanished after accusing the former head of the Chinese Olympic Committee, Zhang Gaoli, of raping her. 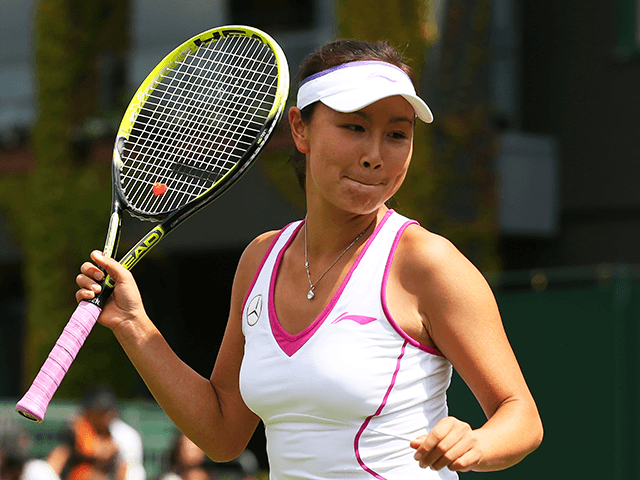 Shuai Peng of China reacts during her Ladies’ Singles first round match against Anabel Medina Garrigues of Spain on day two of the Wimbledon Lawn Tennis Championships at the All England Lawn Tennis and Croquet Club on June 25, 2013 in London, England. (Photo by Julian Finney/Getty Images)

Bolsonaro often engages the public with extended chats on Facebook or other social media outlets, so it is possible he mentioned China’s human rights abuses or a potential Olympics boycott in such appearances. If he did, it received no media coverage and Bolsonaro did not press the issue.

The Brazilian president held an event for Olympic athletes in October, presumably a prime opportunity to mention concerns about the upcoming Beijing Games. The event, to honor medal winners who participated in the belated “2020” Tokyo Summer Olympics, featured 60 athletes. Bolsonaro thanked them for their accomplishments, but reports do not indicate he addressed the upcoming Olympic Games or ongoing concerns with human rights atrocities in China. While the Peng situation had not yet occurred, Brazil is a majority Christian country – as Bolsonaro often likes to tout – making most of its athletes potential targets for persecution. 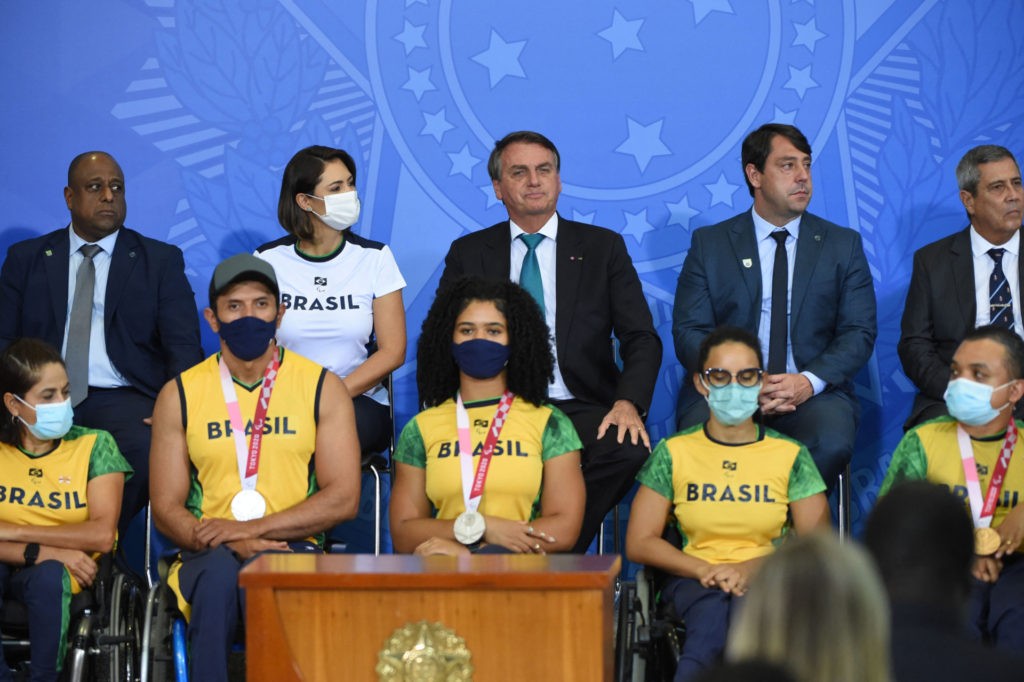 Brazilian President Jair Bolsonaro (C back row) attends a ceremony for the Olympic and Paralympic athletes who participated in the Tokio 2020 Olympic Games, at Planalto Palace in Brasilia, on October 6, 2021. (Photo by EVARISTO SA/AFP via Getty Images)

Brazil does typically make a much bigger showing in the Summer Olympics than its winter counterpart due to the country’s tropical climate making practicing winter sports more difficult and less popular. Brazil is a heavy-hitter in Olympic medals, ranking 12th among all participants in Tokyo. As of last week, Brazil is scheduled to play in the Winter Olympics for the ninth time with its largest-ever delegation to the event.

By the time the Olympics get here in February, all evidence suggests the Bolsonaro of 2018 is long gone. The president made no significant comments about the Chinese Communist Party during the early days of his presidency, but completely abandoned any potential resistance during a trip to Beijing in late 2019.

“I’m in a capitalist country,” Bolsonaro bizarrely, and falsely, declared upon arriving in Beijing. The president signed eight trade agreements with the architect of the Uyghur genocide, Xi Jinping, without in any way challenging Chinese Communist Party dogma during his trip.

“Brazil is a sea of opportunity for China,” Bolsonaro instead asserted. “Brazil needs China, and China needs Brazil.” 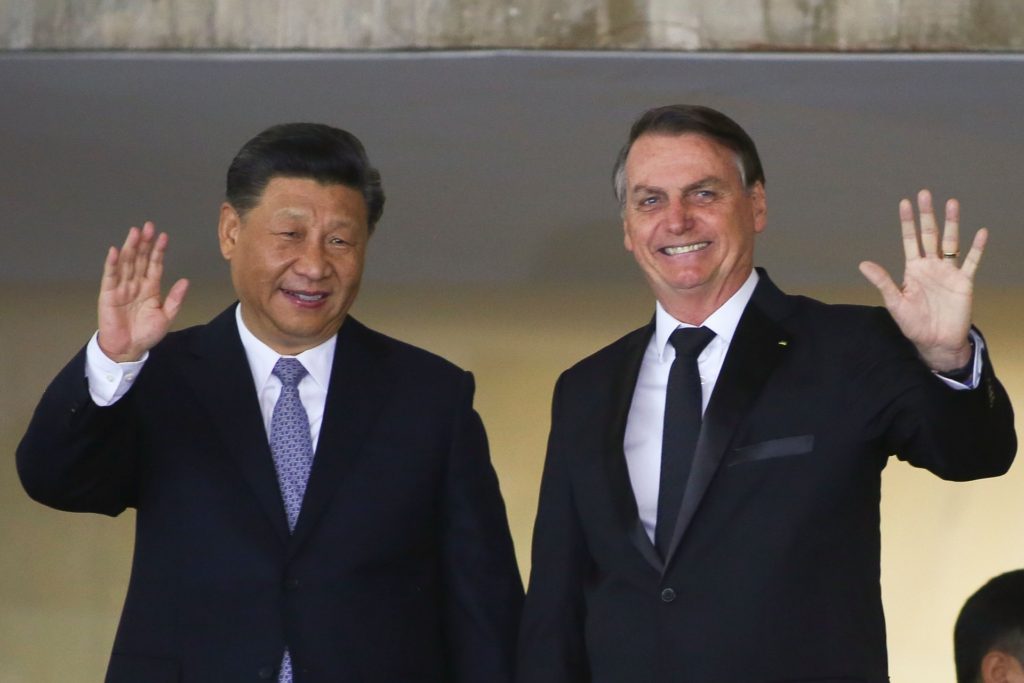 China’s President Xi Jinping (L) and Brazil’s President Jair Bolsonaro (R) wave before a bilateral meeting ahead of the 11th edition of the BRICS Summit, on November 13, 2019. (Photo by SERGIO LIMA/AFP via Getty Images)

Rather than keeping to formalities, Bolsonaro insisted on friendly exchanges with Xi, the world’s foremost human rights criminal, gifting him a soccer jersey from his favorite Brazilian club. In contrast, last year, Bolsonaro threatened to declare war on the United States over President Joe Biden’s environmentalism.

The current president and his administration spent much of 2021 attempting to get on China’s good side, profusely thanking China for donations of its low-quality Chinese coronavirus vaccines, and expressing hope that China would strengthen what is already a stranglehold on the Brazilian economy. Bolsonaro couldn’t help himself – he suggested the pandemic was a product of biological warfare in May – but left open who exactly set off the weapon. “I didn’t say the word ‘China,'” he insisted.

Bolsonaro also appeared to oust his foreign affairs minister, Ernesto Araújo, for being too tough on China. Officially, Araújo quit, but he wrote an extensive public resignation letter in which he blamed pressure to allow China’s government-linked Huawei tech giant to bid for a contract to build Brazil’s 5G network and pressure to allow the import of Chinese vaccine products, which the federal health agency Anvisa had not approved at the time.

The trend does not appear to be abating.

“Deepening ties in the economic field is necessary for China and for Brazil. Some say ‘we are extremely dependent on China,'” Bolsonaro’s head minister of the Institutional Security Office, Gen. Augusto Heleno, said at an event last month. “We are dependent on China because we have great trade ties with China. And they are trade ties. They also depend on us.”

The allegedly conservative Brazilian president has struggled during his tenure to find a political home on the world stage. Much of that can be attributed to extensive, unceasing smear campaigns by the far left at home (where they tried to charge him, but not Xi, with “crimes against humanity”) and abroad. But Bolsonaro himself takes much of the blame when he refuses to fulfill his campaign promises or live up to the anti-communist values that his people believed in enough to make him president.