Kyle Rittenhouse, the 18-year-old student who is on trial for murder in Kenosha, Wisconsin, during the Black Lives Matter riots August 25, 2020, broke down in tears on the witness stand on Wednesday as he described the chase that led to the shooting last year.

Rittenhouse explained while on the witness stand on Wednesday that he had obtained a fire extinguisher, and then began running to where he was told there were fires.

“I didn’t notice Mr. Rosenbaum until he came out from behind the car and ambushed me,” the 18-year-old said of Joseph Rosenbaum, who Rittenhouse is accused of fatally shooting.

Kyle Rittenhouse breaks down in tears on the stand as he recounts being cornered by Ziminski and Rosenbaum.

Rittenhouse continued, stating that he told people, “I’m just here to help. I don’t want any problems. I just want to put out the fires, if there are any.”

At that point, Rittenhouse added that he took “a step back,” and then attempted to “get out of that situation and go back north down Sheridan Road.”

When asked to describe what happened next, Rittenhouse explained that he wasn’t able to successfully leave without an altercation.

“Once I take that step back, I look over my shoulder, and Mr. Rosenbaum — Mr. Rosenbaum was now running from my right side, and I was cornered from in front of me with Mr. Ziminski, and there were…” Rittenhouse explained, but was unable to finish his sentence, as he began to break down in tears.

“There were people right there — that’s when I run,” Rittenhouse added, but again, was unable to finish his sentence. 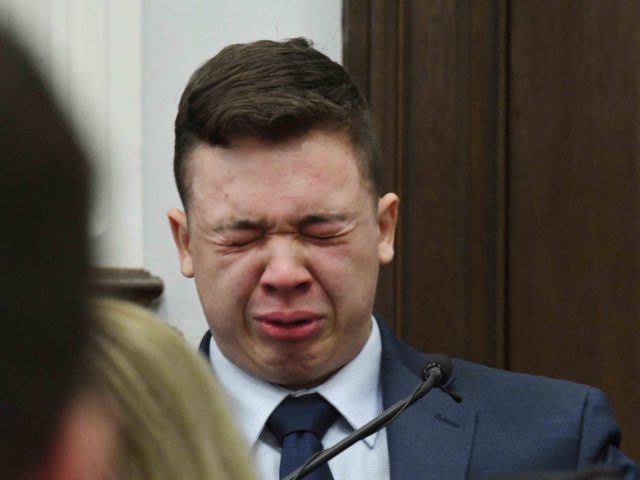 KENOSHA, WISCONSIN – NOVEMBER 10: Kyle Rittenhouse becomes emotional describing events leading up to the shooting of Joseph Rosenbaum as he testifies during his trial at the Kenosha County Courthouse on November 10, 2021 in Kenosha, Wisconsin. Rittenhouse shot three demonstrators, killing two of them, during a night of unrest that erupted in Kenosha after a police officer shot Jacob Blake seven times in the back while police attempted to arrest him in August 2020. Rittenhouse, from Antioch, Illinois, was 17 at the time of the shooting and armed with an assault rifle. He faces counts of felony homicide and felony attempted homicide. (Photo by Mark Hertzberg-Pool/Getty Images)

The judge then said they would be taking a ten-minute break before resuming the case.

The prosecution had rested its case earlier in the week after laying out the basic elements of the crimes of which Rittenhouse is accused.

On cross-examination, however, several prosecution witnesses admitted that Rittenhouse had only fired his rifle after being pursued. Moreover, one “victim,” Gaige Grosskreutz, admitted he had pointed his own gun at Rittenhouse.