BAGHDAD (AFP) — Iraqi forces have driven the Islamic State from central Tal Afar and its historic citadel, they said Saturday, placing them on the verge of fully recapturing one of the last IS strongholds in the country.

The advance, just days into an assault on the strategic town, comes six weeks after Iraqi Prime Minister Haider al-Abadi declared victory over the jihadists in second city Mosul, where the jihadist group declared its “caliphate” in 2014.

“Units of the Counter-Terrorism Service liberated the Citadel and Basatin districts and raised the Iraqi flag on top of the citadel,” operation commander General Abdulamir Yarallah said in a statement.

The CTS and federal police units had also seized three northern districts and the Al-Rabia neighbourhood west of the citadel, a day after taking the district of Al-Talia to the south.

Clashes were ongoing on the northern outskirts and Iraqi forces were dealing with final pockets of jihadists inside the city, Yarallah said.

Government troops and units of the Hashed al-Shaabi paramilitary coalition, backed by a US-led coalition against IS, launched the assault on Sunday after weeks of coalition and Iraqi air strikes.

Progress there has been far more rapid than in Mosul, Iraq’s second city, which fell to Iraqi forces in July after a gruelling nine-month battle.

Officials have said they hope to announce victory in Tal Afar by Eid al-Adha, the Muslim holiday set to start in Iraq on September 2.

Most of Tal Afar’s 200,000 residents, the majority of them Shiite Turkmens whose beliefs are anathema to the Sunni hardliners of IS, fled as the jihadists arrived.

Pro-government forces faced an obstacle course of roads blocked with earth embankments and strategically-parked trucks, as well as sniper fire and mortar shelling.

Troops also said they discovered a network of underground tunnels used by the jihadists to launch attacks behind lines of already conquered territory, or to escape.

The International Organization for Migration said “thousands of civilians” had fled Tal Afar since the offensive began.

Those who flee through desert areas face soaring temperatures for long periods, putting them at risk of dehydration, said Viren Falcao of the Danish Refugee Council. 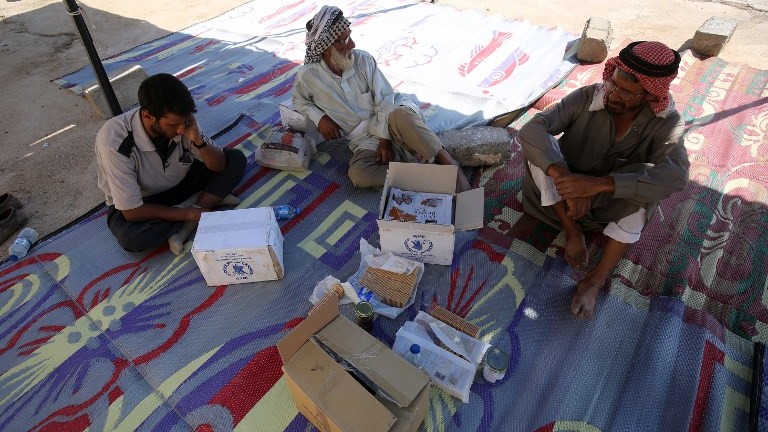 Displaced Iraqis, who fled the fight between Iraqi forces and the Islamic State in Tal Afar, sit inside a tent next to boxes of medical aid at the Badush camp on August 25, 2017. (AFP Photo/Ahmad Al-Rubaye)

Once Tal Afar is retaken, Baghdad is expected to launch a new offensive on Hawija, 300 kilometers north of Baghdad.

IS is also present in the vast western province of Anbar, where it controls several zones along the Syrian border with war-ravaged Syria, including the Al-Qaim area.

The jihadist group has lost much of the territory it controlled and thousands of its fighters have been killed.

The foreign and defence ministers of France visited Baghdad Saturday to affirm their country’s support in the fight against IS.

French forces have carried out air and artillery strikes in support of Iraqi operations.

“As long as our common enemy has not been eradicated, France will continue to take part” in the campaign, Parly said.