The UK Labour Party on Tuesday passed a motion condemning Israel while pledging to halt all UK weapon sales to the Jewish state if it gains power.

At the same time delegates rose as one to applaud the Palestinian state,  waving its flag in a show of “solidarity” with people sworn to the destruction of Israel. 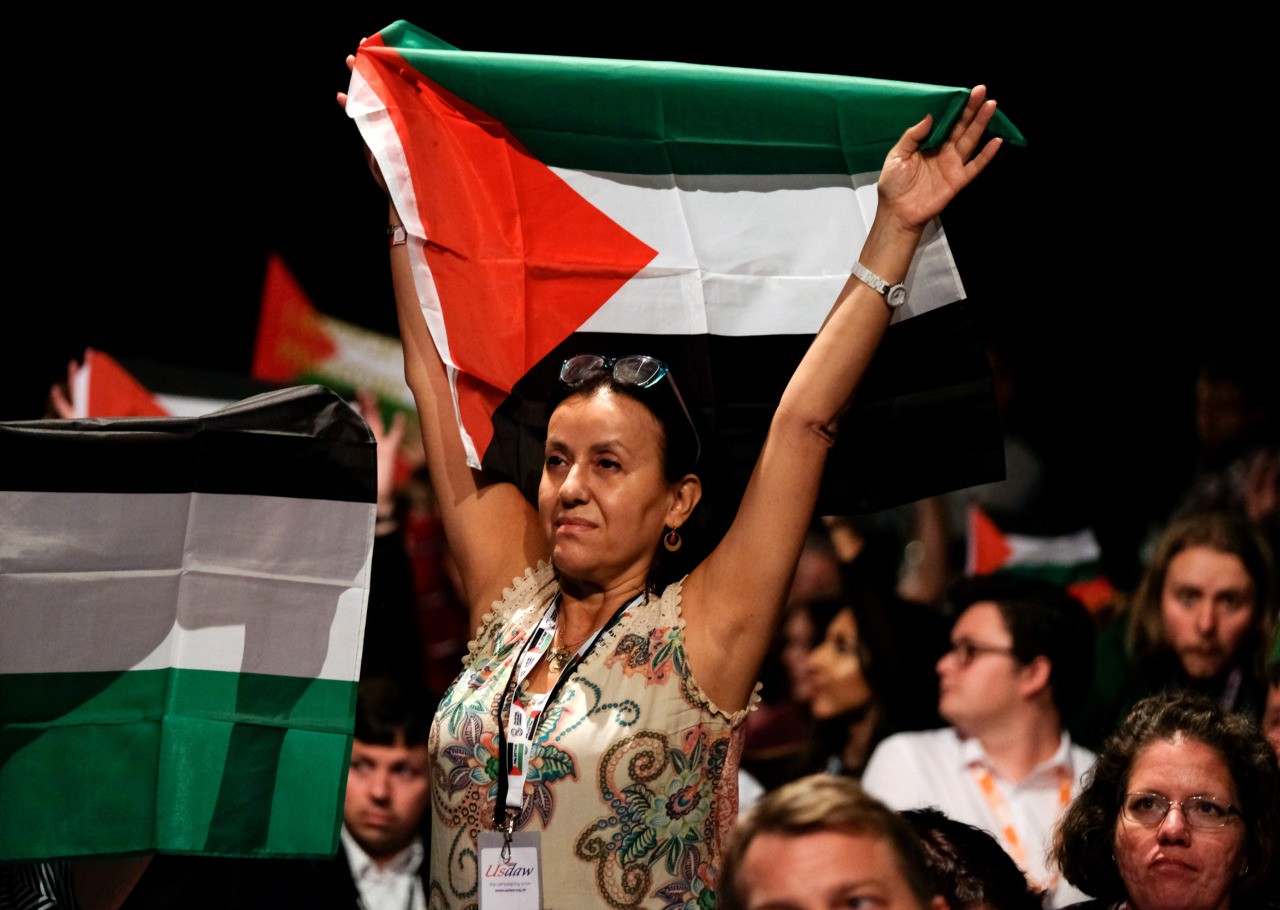 Delegates wave Palestinian flags during a speech about the situation in Palestine on day three of the Labour Party Conference on September 25, 2018 in Liverpool, England. ( Ian Forsyth/Getty Images)

The party’s annual conference in Liverpool slammed Israel’s response to violent protests, riots and terrorist attacks along the Gaza border, urging more UK funding for the U.N. agency for Palestinians, and backing a freeze on British arms sales to Israel.

The anti-Israel vote came after a heated debate that saw Palestinian flags waved in the convention hall and participants chanting, “Free Palestine.”

A sea of Palestinian flags as Motion on Palestine is moved at #lab18 pic.twitter.com/eHQtZGvx0L

The room was filled with Palestinian flags and chants to “free free Palestine!”

A historic event in Labour Party history, so proud to be a part of it. #Labour4Palestine #Palestine #FreePalestine pic.twitter.com/fn6NjXzmce

During the debate, Emily Thornberry, Labour’s shadow foreign secretary, acknowledged the stain of Jewish hatred running through the hard-left party, telling delegates Labour anti-Semites were using the issue of Palestine to promote hatred, calling for them to be thrown out of the party.

She claimed that all Labour members “support the Palestinian cause, we are all committed to recognise the Palestinian state, and I stand here with no hesitation when I condemn the Netanyahu government for its racist policies and its criminal actions against the Palestinian people.”

Then she pointed again to the anti-Semites in Labour, saying “But I know as well, and we must all acknowledge, that there are sickening individuals on the fringes of our movement, who use our legitimate support for Palestine as a cloak and a cover for their despicable hatred of Jewish people, and their desire to see Israel destroyed.”

Such a powerful moment when over 1000 Palestinians flags flew in solidarity with #Palestine whilst the #StopArmingIsrael motion was heard at #Lab18. First time in living memory a Palestine motion heard at Labour conference. Palestine will be free. pic.twitter.com/8cGPmB9tps

The motion against Israel was proposed by delegate Colin Monehen, who said, “I want us to say this to every Palestinian: We have heard you calling from the darkness and we cannot and we will not ignore you or your tragedy.”

Monehen, a staunch pro-Palestinian supporter of party leader, said that Palestinians can’t be “left alone in the darkness” and added that their story “must be told,”

He refused to leave the stage when told his time had expired. “My time is not up, I’m speaking for the Palestinian people,” he cried to loud applause.

“If you want me off, you better send an army because East Enders, like Palestinians, don’t go down easy.”