An organization run by notorious Palestinian extremist and Israel boycott defender Hanan Ashrawi co-sponsored and organized the planned visit to Israel by controversial Representatives Rashida Tlaib of Michigan and Ilhan Omar of Minnesota.

On Thursday, Israeli Interior Minister Aryeh Deri confirmed the two congresswomen would be barred from entry in keeping with a law that allows Israel from denying passage to supporters of the Boycott, Divestment and Sanctions (BDS) Movement seeking to delegitimize the Jewish state.

Omar and Tlaib are both prominent BDS supporters who last month introduced a resolution in Congress aimed at supporting the antisemitic BDS Movement, which targets the Middle East’s only democracy and is engaged in economic warfare against Israel.

The cancelled visit was partially organized and co-sponsored by Miftah, an anti-Israel organization headed by Ashrawi, a member of the Palestine Liberation Organization’s executive committee and supporter of BDS.

Ashrawi claimed the trip was supposed to be a way for Omar and Tlaib “to engage with the Palestinian people directly and to see things on the ground.”

Ashrawi was a political leader of the violent First Palestinian Intifada and served as deputy to late PLO leader and arch-terrorist Yasser Arafat. She is known for espousing anti-Israel conspiracy theories and attempting to justify Palestinian “resistance” against the Jewish state. 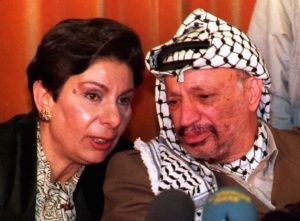 BRUSSELS, BELGIUM: PLO leader Yasser Arafat (R) speaks with Hanan Ashrawi, spokeswoman of the Palestinian delegation to the Middle East peace talks, during a press conference 08 November 1993. Arafat had met earlier with foreign affairs ministers from the European Community, and Ashrawi is reportedly being considered for the post of PLO representative in Washington. (Photo credit should read JACQUES DEMARTHON/AFP/Getty Images)

In a 2001 speech to the World Conference Against Racism, Ashrawi referred to the creation of Israel as a “Nakba” or “catastrophe.”

At the height of the deadly Palestinian intifada campaign of suicide bombings and shootings, Ashrawi wrote the following in October 2001 of the carnage: “I see it as an expression of the will to resist, of the spirit of a people that will not succumb to coercion and subjugation. … Popular protests and acts of resistance — political, human resistance — are necessary to demonstrate the people’s will.”

The term “resistance” is usually used by the Palestinians as a euphemism for deadly terrorist attacks targeting Israelis.

Ashrawi participated in the political leadership of the First Palestinian Intifada, which started in 1987. She served on the Intifada Political Committee until 1993.

In explaining Israel’s decision to block the lawmakers, Prime Minister Benjamin Netanyahu noted that “there is no country on Earth that respects America and the American Congress more than the State of Israel.”

Netanyahu continued: “Israel is open to all critics and any criticism, with one exception: The law in Israel that prohibits entry to people calling and advocating for boycotting the country, just like in other democracies that bar entry to those who they believe will do harm to their nation.

“The US has behaved this way toward an Israeli member of Knesset and other public figures from around the world,” Netanyahu noted.

“Several days ago, we received their trip itinerary, which clarified that they planned a visit whose sole purpose was to support boycotts and deny Israel’s legitimacy.”

David Friedman, Trump’s ambassador to Israel, said that he “supports and respects” Israel’s decision to deny entry to the two extremist lawmakers over their BDS support.

“The Boycott, Divestment and Sanctions [BDS] movement against Israel is not free speech,” Friedman says. “Rather, it is no less than economic warfare designed to delegitimize and ultimately destroy the Jewish State. Israel properly has enacted laws to bar entry of BDS activists under the circumstances present here, and it has every right to protect its borders against those activists in the same manner as it would bar entrants with more conventional weapons.”