Beirut (AFP) — Flooding at Beirut’s only Jewish cemetery has swept away entire graves after heavy rainfall hit the Lebanese capital.

The floodwater destroyed a retaining wall at the graveyard in the Ras al-Nabaa district overnight into Thursday, dragging sarcophagi and large chunks of rubble onto the pavement below.

Nagi Georges Zeidan, an expert on Lebanon’s tiny Jewish community and a volunteer at the graveyard, said at least four graves were damaged, all in part of the cemetery for people buried in the 1940s.

Zeidan said the skeletons of the deceased remained concealed but have yet to be removed from beneath the rubble. He urged authorities to intervene to make sure they are preserved. 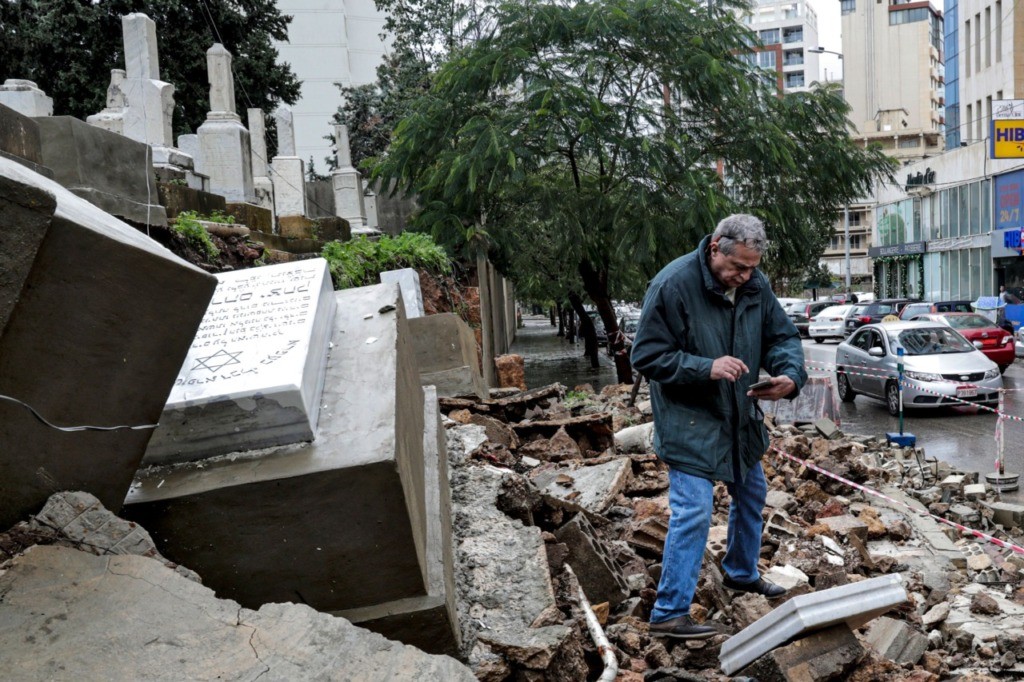 A man inspects graves damaged during bad weather in a winter storm at the Jewish cemetery in the Lebanese capital Beirut on December 26, 2019. – Entire grave stones spiled onto a street in the Lebanese capital overnight after floods resulting from heavy rainfall damaged the capital’s historic and only Jewish graveyard that dates back to the 1820s. (ANWAR AMRO/AFP via Getty Images)

The cemetery has 3,407 graves, according to Zeidan, who keeps a record of all the names of the deceased.

It is owned by the Lebanese Jewish Community Council and dates back to the 1820s, he added.

Lebanon was once home to thousands of Jews but they left steadily for Israel, Brazil, Europe and the United States after the State of Israel was established.

According to Zeidan, only 29 Jews remain in Lebanon.

A handful of buildings that were once synagogues still stand, including one in the northern city of Tripoli that has been turned into a fabric dye shop, and one in the southern city of Sidon.