The attack resulted in 176 deaths after an Iranian soldier shot a Ukrainian commercial airliner out of the sky shortly after takeoff from Tehran, reportedly mistaking the plane for an American missile. Iran first falsely claimed evidence the plane had spontaneously combusted, then admitted to having shot it down. On Wednesday, officials began floating the theory that America had hacked into their missile systems and shot the plane to embarrass Tehran, offering no evidence.

Iran’s PressTV outlet published an article Wednesday, citing a report by Agence France-Presse (AFP) quoting American troops on the group during the Iranian ballistic missile attack, alleging that the Americans were “horror-struck” and the targeted Iraqi bases suffered “extensive damage,” an allegation both Washington and Baghdad, which administers the bases, denies.

“Horror-struck with Iran’s attack on their military base in Iraq, American soldiers recount how they lost contact with their state-of-the-art unmanned aerial vehicles (UAVs) in the sky,” PressTV recounted. “At the time the attack was launched, the U.S. army was flying seven UAVs, including MQ-1C Gray Eagles, over Iraq to monitor bases where US-led coalition forces are deployed, AFP said in a report on Wednesday.”

The report in question did note American forces were flying UAVs at the time of the attack. Omitted from the report is the fact that no human damage occurred as a result of over a dozen ballistic missiles hitting the Ain al-Assad airbase in Iraq.

“Most of the other 1,500 US soldiers had been tucked away in bunkers for two hours, after advance warning from superiors,” AFP reported. “But 14 pilots had stayed in dark containers-turned-cockpits to remotely fly the “birds” and monitor essential feeds from their high-powered cameras.” 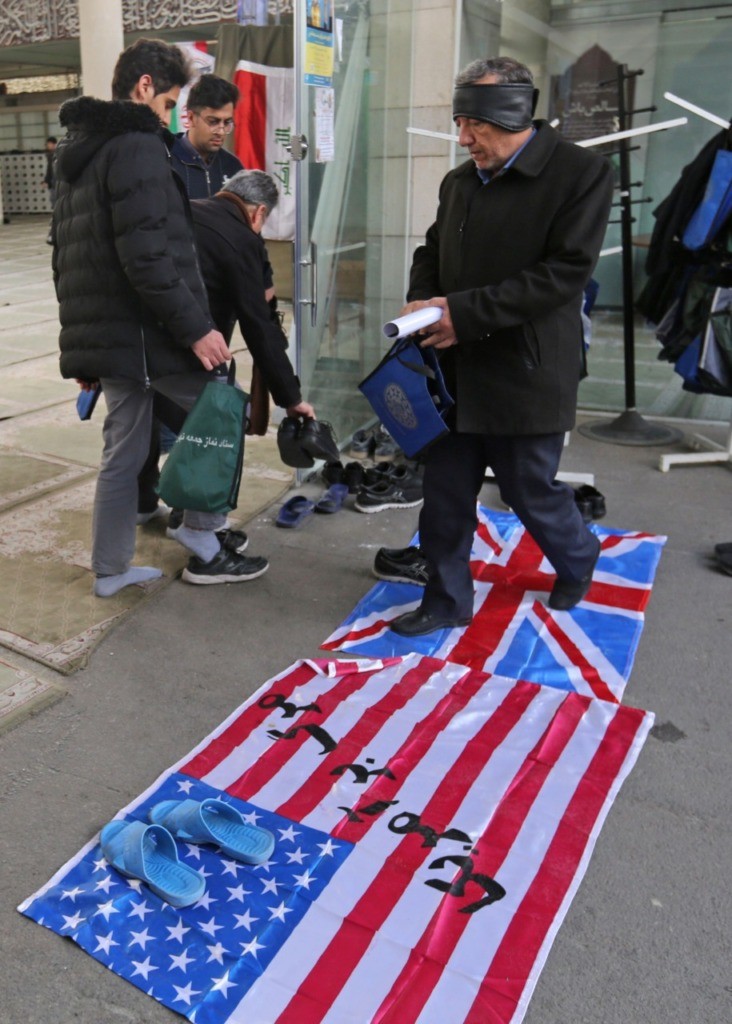 A supporter of the Basij, a militia loyal to the Islamic republic’s establishment, walks over a Union Jack and US flag as he arrives at a memorial for victims of the Ukraine plane crash, in University of Tehran on January 14, 2020.  (ATTA KENARE/AFP via Getty Images)

AFP spoke to some of these pilots, who stated they at times felt it was possible they could die in a missile strike.

The PressTV report claimed “reports of extensive damage” at the base, not citing any in particular. The AFP report did not describe any “extensive damage.” PressTV did acknowledge, however, that the U.S. government confirmed “only minimal damage was sustained at the base.”

Reporting only vague “extensive damage” is progress for PressTV, which joined at least three other English-language Iranian outlets last week in claiming that the missiles had killed at least 80 American soldiers. Fars News Agency, another state-run outlet, claimed 200 American soldiers suffered injuries in the attack in addition to the 80 dead. Tasnim, an Iranian propaganda outlet that brands itself independent of the regime, quoted another “source” heralding the destructive power of the missiles.

All the outlets cited the same unnamed Islamic Revolutionary Guard Corps (IRGC) source for their claim of dead Americans.

The IRGC is a U.S.-designated foreign terrorist organization. Iran’s missile strikes were branded retaliation for an American airstrike eliminating Major General Qasem Soleimani, the head of the IRGC’s Quds Force. Soleimani led the foreign arm of the IRGC, tasked with helping Iranian proxies in the region and beyond kill American soldiers, suppress civilian action against Iran, and otherwise cling to power.

The Iranian outlets have not corrected or removed their reports of dead and injured Americans from their webpages at press time, despite the Pentagon confirming they are not true.

Rouhani also appeared to applaud the missile strikes as having made an impact in America’s role in the Middle East on Thursday.

“The United States is oppressing and carrying out acts of aggression against all countries around the world, and some may respond with words, but the Islamic Republic of Iran waged military strike against their base for one night and kept the Pentagon awake for 24 hours,” Rouhani proclaimed. “After the U.S. actions, it became clear for themselves and the world that their program was completely wrong. And this is not something to be just inferred, but the U.S. President had told leaders of other countries that the Iranian regime would not resist for more than three months with the new sanctions and maximum pressure.”

“In the 41-year-old history of the Iranian nation’s battle against its enemies, we have witnessed bright pages of the nation’s unique and strategic victories,” Salami reportedly said. “The Iranian nation has defeated the fundemental policies of the enemy in the region and the world. The great Iran has undermined the US power, and we are seeing the effects of its decay today.”

As of Wednesday, reports from Iraq indicate that American troops have returned to their regular activities against the Islamic State, contradicting Iranian declarations of retreat.