A German appellate court ruled Tuesday a 13th-Century antisemitic carving may remain on the wall of a church in Wittenberg, rejecting a plea by a local Jewish man to have it removed.

Michael Düllmann brought the claim, saying the “Judensau,” or Jews’ sow, relief showing a rabbi lifting a sow’s tail and peering at its behind while other Jewish figures suckle on her teats represents, “a defamation of and insult to the Jewish people.”

The image on the wall of the Stadtkirche, where Protestant reformer Martin Luther preached, has long been the subject of dispute, as Breitbart News reported. 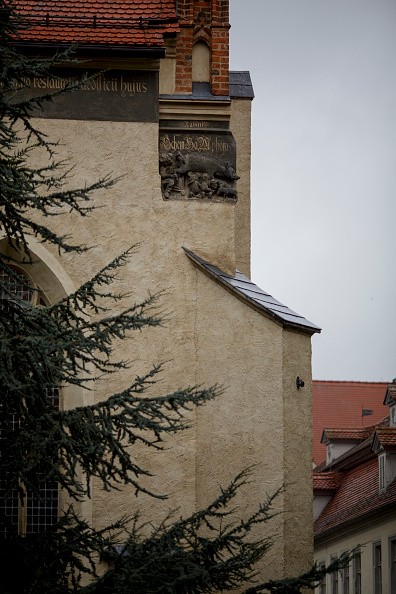 Portrayals of Jews in obscene association with female pigs were used as a way of humiliating them and their religion in the Middle Ages.

Mr Düllmann told local broadcaster MDR ahead of the ruling, that as long as the “Judensau” remained on the wall, the Church would be guilty of promulgating antisemitism.

The court found that while the sculpture would be offensive if viewed in isolation, “in the context in which it has been placed by the church it has lost its insulting character”, according to spokesman Henning Haberland.

The church’s pastor, Johannes Block, told the Süddeutsche Zeitung newspaper having the sculpture on the facade of the church filled him “with shame and pain”.

“We are trying to deal with this difficult inheritance responsibly,” he told the paper (in German). The parish wanted to leave the carving in place as a reminder of the antisemitism of the Middle Ages, and of the antisemitic features of Luther’s theology, he explained.

The court ruled that Mr Düllmann may still appeal and take the case to Germany’s highest court in Karlsruhe.