French President Emmanuel Macron toured the streets of Beirut, Lebanon, on Thursday, becoming the first head of state to do so following Tuesday’s devastating explosion, including Lebanese President Michel Aoun.

Large crowds of desperate residents followed him through the streets, calling for revolution and chanting “Michel Aoun is a terrorist.”

A blast close to the port of Beirut incinerated much of the port and a significant percentage of the city in Tuesday, leaving hundreds of thousands homeless. Lebanese Prime Minister Hassan Diab revealed on Tuesday evening that the government had traced the mystery explosion to a cache of nearly 3,000 tons of ammonium nitrate, a highly explosive material sometimes used as fertilizer, that had been languishing in a port warehouse since 2013. Subsequent reports indicated that customs officials had repeatedly attempted to contact the Lebanese government bureaucracy urging them to move the stash of explosives to a safer, less densely populated area, but never received a response.

President Aoun announced Wednesday the government would place all officials responsible for storing and securing confiscated materials at the port of Beirut between 2014 and Tuesday under house arrest until further notice.

Macron traveled to Beirut in recognition of the century-old relationship between Lebanon and France, stemming from the decision by the League of Nations following World War I to place Lebanon and parts of Syria under French control to help those parts of the former Ottoman Empire rebuild. 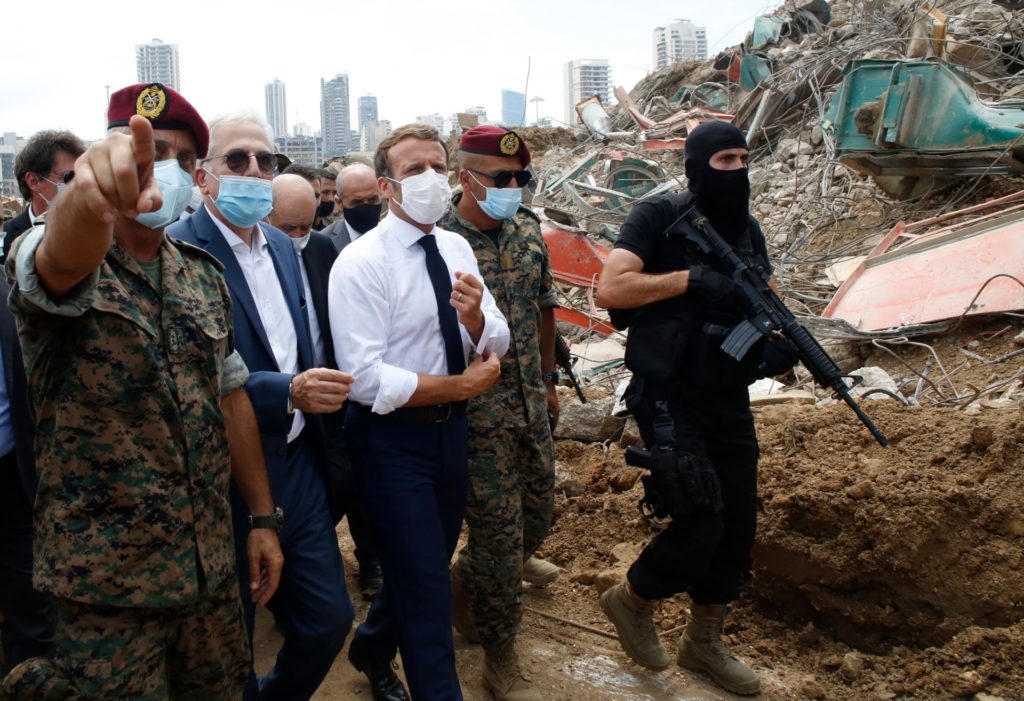 French President Emmanuel Macron (C), surrounded by Lebanese servicemen, visits the devastated site of the explosion at the port of Beirut, on August 6, 2020 two days after a massive explosion devastated the Lebanese capital in a disaster that has sparked grief and fury. (THIBAULT CAMUS/POOL/AFP via Getty Images)

France withdrew from Lebanon in 1946 but remains extremely popular, particularly among parts of the Lebanese population that have participated in ongoing protests against the ruling regime for its corruption and failure to offer basic services properly, like electricity and garbage collection. A petition circulating in the aftermath of the explosion calling for the return of the French mandate has collected tens of thousands of signatures.

Macron vowed that France would offer humanitarian aid and ensure that corrupt Lebanese politicians would not steal it.

“I guarantee you this – aid will not go to corrupt hands,” Macron told a crowd in central Beirut. “I will talk to all political forces to ask them for a new pact. I am here today to propose a new political pact to them.”

Macron issued a call for “political change” and lamented that France had been calling for better governance in the country “for months, if not years.”

“Beyond the explosion, we know that the crisis here is serious, it implies historical responsibility from the leaders in place. It is a political, moral, economic, and financial crisis of which the first victims are the Lebanese people. And it imposes extremely rapid reactions,” he said.

The public greeting Macron appeared receptive to a change in government, chanting “Michel Aoun is a terrorist” and other anti-government slogans.

About 100 volunteers cleaning up Gemmayze Street in #Beirut crowd around French President Macron, chanting “the people deand the fall of the regime” and “President Michel Aoun is a terrorist.”#Lebanon pic.twitter.com/LpN6XW2zp0

In a video of the crowd surrounding Macron posted to Twitter by BCC Journalist Quentin Sommerville, an unidentified man can be heard shouting to Macron in English, “Please, please, I beg you, help us, do something about us!”

"Help us. Please help us. What are you doing to help us?" pic.twitter.com/44upgNq54o

France 24 reported that, in addition to touring populated areas attempting to rebuild, Macron visited the blast site, “now a wasteland of blackened ruins, rubble and charred debris where a 140 metre (460 feet) wide crater has filled with sea water.”

Along with Macron, France has sent at least two planeloads of rescue workers and humanitarian aid to Beirut. As the explosion affected a densely populated area, officials believe that many of the hundreds of missing people may be still alive under the rubble of destroyed buildings. Lebanese rescue workers have struggled to search for the living at night as the collapse also eliminated access to electricity in the affected area. The humanitarian aid is also important, particularly food aid, because the destruction at the port has made importing food to the city extremely difficult and the explosion destroyed multiple warehouses storing grain supplies. Beirut was already experiencing food shortages before the blast.

Lebanon has experienced anti-government protests attracting thousands of people nationwide for months, the most recent of them in June and resulting in 120 injuries after police responded to the otherwise peaceful protests with repressive tactics. Hundreds of protests in Tripoli similarly burned down parts of that city in April after police forces shot a protester dead.