A pair of specially chartered tugboats on Sunday were ordered to make best speed to the Suez Canal to aid efforts to free a skyscraper-sized container ship wedged for days across the crucial waterway.

The massive Ever Given, a Panama-flagged, Japanese-owned ship that carries cargo between Asia and Europe, went aground Tuesday in a single-lane stretch of the canal, as Breitbart News reported.

In the time since, authorities have been unable to remove the vessel and traffic through the canal — valued at over $9 billion a day — has been halted, further disrupting a global shipping network already strained by the coronavirus pandemic.

The Dutch-flagged Alp Guard and the Italian-flagged Carlo Magno, called in to help tugboats already there, reached the Red Sea near the city of Suez early Sunday, satellite data from MarineTraffic.com showed. 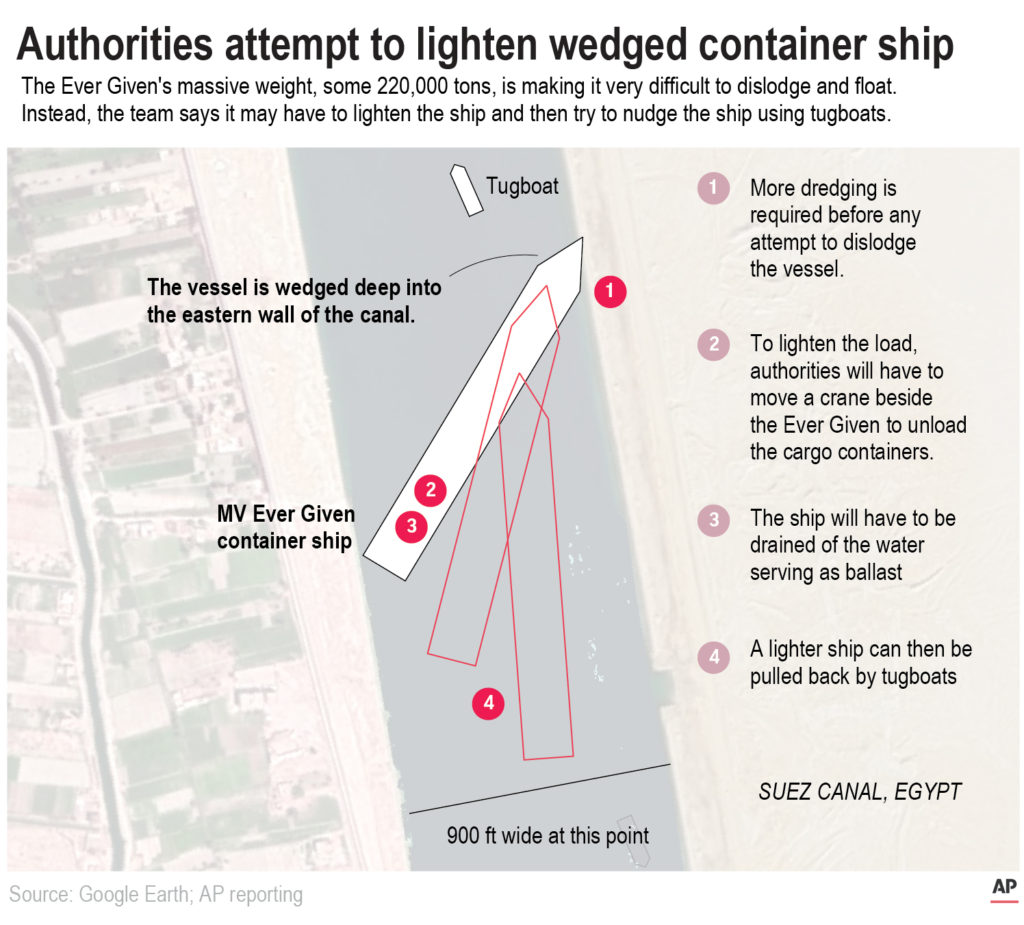 Map show what authorities will have to do to move the Ever Given from the Suez Canal (Via AP).

The tugboats will nudge the 400-meter-long (quarter-mile-long) Ever Given as dredgers continue to vacuum up sand from underneath the vessel and mud caked to its port side, said Bernhard Schulte Shipmanagement, which manages the Ever Given.

Workers planned to make two attempts Sunday to free the vessel coinciding with high tides, a top pilot with the canal authority said.

“Sunday is very critical,” the pilot said. “It will determine the next step, which highly likely involves at least the partial offloading of the vessel.”

Despite the efforts of the canal’s operators, the vessel with gross tonnage of 219,000 and deadweight of 199,000 has yet to budge, forcing global shipping giant Maersk and Germany’s Hapag-Lloyd to re-route more vessels around the southern tip of Africa.

The exact circumstances surrounds the grounding are still unclear.

On Saturday, the head of the Suez Canal Authority conceded strong winds were “not the only cause” for the Ever Given running aground, appearing to push back against conflicting assessments offered by others. Lt. Gen. Osama Rabei said an investigation was ongoing but did not rule out human or technical error. 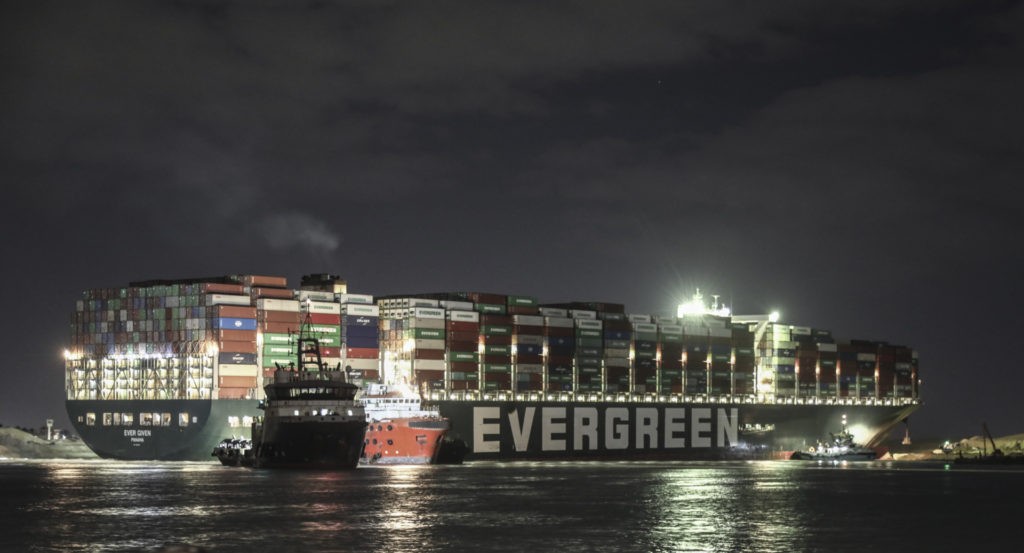 Ever Given, a Panama-flagged cargo ship, that is wedged across the Suez Canal and blocking traffic in the vital waterway is seen Saturday, March 27, 2021. Tugboats and a specialized suction dredger worked to dislodge a giant container ship that has been stuck sideways in Egypt’s Suez Canal for the past three days, blocking a crucial waterway for global shipping. (AP Photo/Mohamed Elshahed)

Bernhard Schulte Shipmanagement maintains “initial investigations rule out any mechanical or engine failure as a cause of the grounding.” However, at least one initial report suggested a “blackout” struck the hulking vessel carrying some 20,000 containers at the time of the incident.

Rabei said he remained hopeful that dredging could free the ship without having to resort to removing its cargo, but added that “we are in a difficult situation, it’s a bad incident.”

Asked when they expected to free the vessel and reopen the canal, he said: “I can’t say because I do not know.”