A mob of stone-throwing Palestinians attempted to lynch an Israeli driver near the entrance to the Old City of Jerusalem on Monday, amid riots stoked by Palestinian leaders.

The driver lost control of his car as he attempted to escape, and hit some of the stone-throwers, as well as a stone barrier on the sidewalk.

Palestinian "Peaceful protesters"… lynching an #Israeli driver in #jerusalem. #hamas and the Palestinian authority are responsible for this violence in the holy city. pic.twitter.com/TX3WjFjvwb

This is how law enforcement works.

Meet the brave Israeli police officer who single-handedly rescued a Jewish driver who was attacked by a lynch mob in Jerusalem earlier today.

A lone policeman chased away the mob by firing into the air. 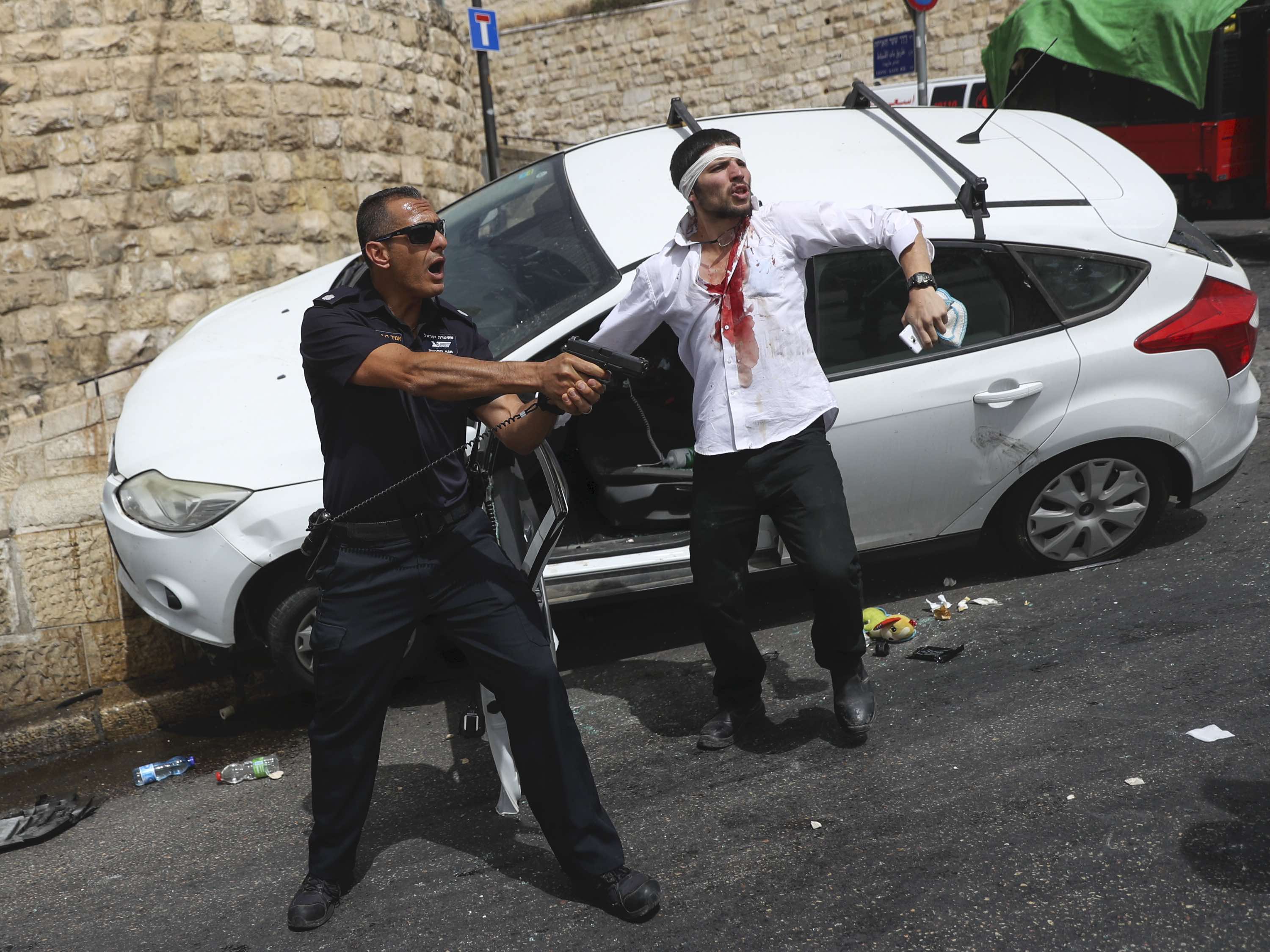 An Israeli police officer protects a Jewish driver who was attacked by Palestinian protesters near Jerusalem’s Old City, Monday, May 10, 2021. Israeli police clashed with Palestinian protesters at a flashpoint Jerusalem holy site on Monday, the latest in a series of confrontations that is pushing the contested city to the brink of eruption. Palestinian medics said at least 180 Palestinians were hurt in the violence at the Al-Aqsa Mosque compound, including 80 who were hospitalized. (AP Photo/Ohad Zwigenberg)

The pro-Palestinian Islam Channel portrayed the Israeli driver as the aggressor, leaving out the stone-throwing attack:

Warning: graphic images. A Palestinian man was deliberately run over by an Israeli driver at the old city of Jerusalem.#Palestine #AlAqsa #Jersualem pic.twitter.com/H31Uh29IoB

An injured Jewish driver lost control of his car and swerved onto a sidewalk after he was pelted with rocks by Arab rioters during a violent protest outside the walls of Jerusalem’s Old City on Monday morning.

Israel Police said that stone throwers attacked the car that was travelling on Jericho Road and that as a result, the driver lost control of his vehicle and veered off the road, hitting several people.

After the car stopped, more stone throwers approached it and they continued to pelt it, opening the doors in an attempt to attack the driver and another male passenger.

A police officer arrived at the scene moments after the car swerved onto the sidewalk and he fired warning shots into the air to disperse the mob as they tried to get to the car’s occupants.