The amnesty bill now being drafted by House Speaker Paul Ryan would trim chain-migration by far less than sought by President Donald Trump, according to details buried in a Politico report.

Trump says ending chain-migration for extended families is a key part of his four-pillar immigration reform, which would gradually pressure employers to raise Americans’ wages and raise productivity by investing in labor-saving machinery.

Ryan repeatedly says his amnesty is built on the four pillars of Trump’s plan, and that he is working “hand-in-glove” with Trump’s deputies. Trump’s congressional outreach aide, Marc Short, attended the Thursday meeting where Ryan outlined his amnesty.

But Ryan shortchanges Trump’s chain-migration reform, according to a Politico report, which said the plan would:

But Ryan’s reported plan would not reform the inflow of older parents, which is the fastest-growing and most expensive aspect of chain migration. “That’s huge,” said Jessica Vaughan, policy director at the Center for Immigration Studies.

Immigrants sponsored 133,000 older parents in 2015, but that number is growing fast and recently reached 175,000, said Vaughan, adding that elderly immigrants:

are not working and paying taxes for many years, and they are going to be accessing benefits in greater numbers than working immigrants do. They have not paid into Social Security and yet a lot of them will qualify for SSI. They are not going to be contributing to the economy. 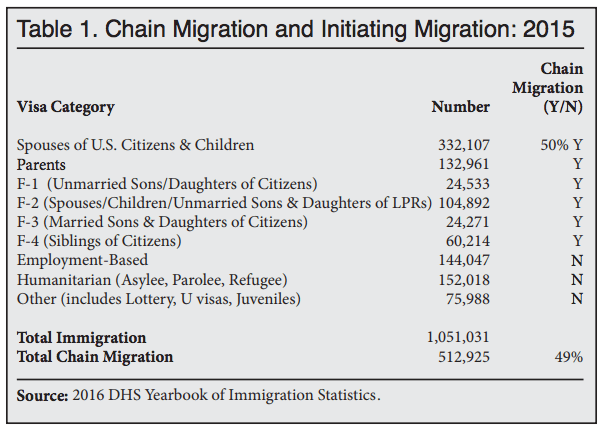 “Deleting the chain-migration provisions from the President’s plan means is a way of preserving the status quo in immigration policy,” said Vaughan. She continued:

Chain-migration is the most important pillar in the President’s framework because it determines the future flow of immigration. Today’s immigrants are choosing tomorrow’s [Americans via chain migration] … Taking them off the table is a way of preserving the status quo.

Trump’s focus on merit-based immigration would allow Americans to choose which immigrants can become the next Americans, and”chain-migration is a low-skill labor-importation program that builds on itself,” she said.

Ryan’s reluctance to cut the chain-migration numbers reflects the push by business to minimize any reduction in the future inflow of migrants which provide an annual windfall of cheap workers, welfare-aided consumers, and renters. “Our goal is to not cut legal immigration,” said Florida Rep. Carlos Curbelo, who is a leader of the discharge-petition group that is demanding the amnesty.

Also, the number of illegals who get green cards from the amnesty should be “as high a number as possible,” Curbelo told RollCall.com on June 8 The number of young illegal immigrants in the United States is estimated at up to 3.6 million.

Curbelo’s donors include some of the Florida millionaires who have threatened to cut off donations until Ryan approves an amnesty. For example, Mike Fernandez’s MBF Healthcare Partners has donated $10,800 to Curbelo in the 2018 cycle.

On June 6, the U.S. Chamber of Commerce sent a letter to all House legislators urging them not to lower future immigration numbers:

Regrettably, some in Congress are proposing to go even further and reduce levels of legal immigration. One proposal being considered in the House of Representatives would drastically reduce overall immigration levels in the future by between 260,000 and 420,000 immigrants a year. These cuts would be devastating to our economy and our local communities …

… the Chamber urges the House to reject significant cuts to legal immigration and to consider including measures that provide certainty to other groups of individuals who are at risk of losing their legal ability to work in the United States.

In his January 2018, State of the Union speech, Trump outlined the four pillars for immigration reform, including ending extended-family chain-migration and the visa lottery. He declared:

The fourth and final pillar protects the nuclear family by ending chain migration. Under the current broken system, a single immigrant can bring in virtually unlimited numbers of distant relatives. Under our plan, we focus on the immediate family by limiting sponsorships to spouses and minor children. This vital reform is necessary, not just for our economy but for our security and our future.

Trump’s chain-migration reform plan says children become adults when they turn 18, and so are not allowed to become chain-migrants. That age change is important because immigration rules now treat adults as minors until they turn 21.

In October 2017, Trump posted his Immigration Principles, which argued for the replacement of extended-family chain migration with merit-based immigration:

i.            End extended-family chain migration by limiting family-based green cards to spouses and minor children and replace it with a merit-based system that prioritizes skills and economic contributions over family connections.

ii.            Establish a new, points-based system for the awarding of Green Cards (lawful permanent residents) based on factors that allow individuals to successfully assimilate and support themselves financially.

Ryan agrees with Trump’s plan to end the diversity visa lottery, which provides green cards to roughly 50,000 adults. Those visa-lottery adults subsequently bring in their chain-migration spouses, minor children, and parents. That stream of chain-migration would drop if the visa-lottery is ended.

Reports say the Ryan plan to transfer the visa-lottery green cards to the large population of more than 3 million younger illegals in the United States, including the 700,000 registered ‘DACA’ illegals. Under Ryan’s plan, the DACA illegals likely would be able to provide legal status — and taxpayer aid in retirement — to the parents who brought them into the United States.

“Chain migration has accounted for more than 60 percent of immigration into the United States over the last 35 years,” according to an October statement issued by the White House.

Trump’s chain migration “cuts would be lasting and extremely helpful to the labor market, and would greatly reduce the fiscal burden of our immigration system,” said Vaughan.

But Paul Ryan has long favored a large-scale inflow of foreign workers and an “open door” into the U.S. labor market, regardless of the impact on Americans’ wages, or the resulting huge shift in Wall Street’s job-creating investments away from middle-American population centers towards the coastal cities where immigrant workers arrive and settle.

That open-door preference is shared by many U.S. business groups, especially the Fortune 500 businesses who hope to recruit foreign white-collar workers in place of well-paid American university graduates.

However, on June 6, Ryan noted that wages are rising. “Unemployment is at 3.8 percent. 3.8 percent rate is the lowest unemployment rate in half a century. Wages are growing too. The wage growth is truly impressive,” the retiring Speaker told reporters during his Thursday briefing. Ryan suggested the gains came from the tax cut, not from Trump’s combination of a growing economy and a no-amnesty labor supply.

Ryan’s amnesty plan predicts 1.8 million amnesty beneficiaries, even though the number of young illegals in the United States is roughly 3.6 million. Media reports do not mention if Ryan’s plan includes a cap on the number of green cards to be awarded to illegals during what will be a rushed, fraud-prone, low-oversight, agency-run amnesty.

Ryan has not explained how his amnesty plan can expand the labor supply and also help raise wages for Americans.